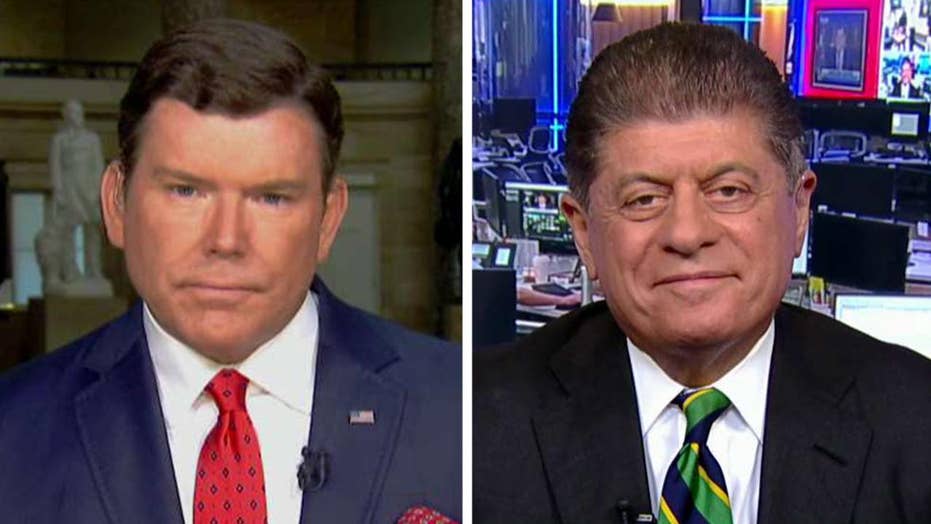 This is a rush transcript from "Special Report with Bret Baier," July 10, 2018. This copy may not be in its final form and may be updated.

BRET BAIER, ANCHOR: Judge Brett Kavanaugh appeared on Capitol Hill today -- his first meetings with senators ahead of what will be a pretty long process towards nomination and confirmation, if it happens.

Judge -- first I want to get your take here. There was some pushback from conservatives that this pick really doesn't fire up the base. Your thoughts on this?

JUDGE ANDREW NAPOLITANO, FOX NEWS SENIOR JUDICIAL ANALYST: Well, I am part of that pushback. It doesn't fire up the base because of some missed opportunities that Judge Kavanaugh had when he sat on the court on which he now sits.

It doesn't fire up the base because of a very, very significant vote unleashing the NSA to capture metadata and content without a search warrant.

And it doesn't fire up the base because it comes from the establishment, which the President used to call the swamp. He's not the outsider that the President promised and delivered with respect to Neil Gorsuch. He's a guy who, with the exception of his seven years at Yale, has spent his entire life within a mile or two of where he's going to be working come October.

NAPOLITANO: Yes. I think it is safe. I think the odds are very strong that he will be confirmed. Senator Rand Paul has moved from a no a few weeks ago to I now have an open mind. Senator Collins has moved from I'm not going to vote for anybody who is pro-life to I'm going to listen to him.

Now the numbers, of course, are daunting with 50 voting Republicans, they can't afford to lose any without picking up some Democrats, but I think they have very good odds that he will be on the bench by the first Monday in October.

BAIER: You know, Amy -- to listen to Democrats up here, there's a lot of focus on Roe v. Wade and the abortion issue overall saying that this is the justice that will change everything.

Take a listen to then-senator, no longer minority leader at that point, Chuck Schumer questioning this judge, 2006.

SCHUMER: Do you consider Roe v. Wade to be an abomination?

KAVANAUGH: Senator -- on the question of Roe v. Wade, if confirmed to the D.C. circuit I would follow Roe v. Wade faithfully and fully. That would be binding precedent of the court. It's been decided by the Supreme Court.

SCHUMER: As to your own opinion?

KAVANAUGH: And I'm saying if I were confirmed to the D.C. circuit, Senator, I would follow it. It's been reaffirmed many times including in Planned Parenthood verdict.

SCHUMER: I understand, but what is your opinion?

KAVANAUGH: The Supreme Court has held repeatedly, Senator and I don't think it would be appropriate for me to give you an answer on the question.

SCHUMER: Ok. You're not going to answer the questions.

BAIER: Obviously he's talking about Supreme Court precedent there. But boy, to listen to the left of up here, it's the end-all, be-all on the conversation.

AMY WALTER, THE COOK POLITICAL REPORT: Well, I expect that we are going to hear similar sort of lines going back and forth between Democratic senators and Kavanaugh when the actual hearings begin. But I think what Democrats are pointing to specifically, and this goes to the Judge's concern that he is not conservative enough, is actually over a case most recently about a young undocumented woman who wanted to seek an abortion.

Now, he was part of the group of judges that denied her appeal, but it ultimately went through. What liberals are saying, Democrats are saying is he showed his true colors on the issue of abortion even though it wasn't about Roe v. Wade? We know this is a slippery slope to it. Conservatives say we wish he hadn't gone farther, especially on the issue of whether people who are in the country illegally deserve access to such things. They do not have the same constitutional rights.

So in this case neither side is going to be particularly happy with how he decided this. But look, Democrats have a choice here. They've got to go and make this a fundamental issue to fire up their base. And the best way to do this is to say that this is an existential threat to the things that they hold dear in their base.

This is Roe v. Wade, this is Affordable Care Act, and part of the reason that the Senate Majority Leader Mitch McConnell was hesitant about Kavanaugh coming in as the nominee is the fact that he does have an incredible paper trail. There are thousands of pages that his opponents and his supporters are going to be going through to look for any little element that they can use in the hearings and, of course, to leak out to the press.

BAIER: But Judge, back to the conservative part. I mean on the numbers as far as where he stands as far as his conservatism, if you rank potential Supreme Court justices. If he was on this court, he's closer to Clarence Thomas than he is Anthony Kennedy, isn't he?

NAPOLITANO: Absolutely. He's pro-life, pro-gun, pro-police. Now, the pro-police is a problem for libertarians because he seems to find ways that we think cut holes in the Fourth Amendment. But that is not a problem for mainstream conservatives.

Look, this issue of Roe v. Wade I think he's going to answer Senator Schumer's questions next month or later this month, just as he did last time. The President has said he doesn't like Roe versus Wade, but it's not for his nominee to the court to say that because at this moment it is the law of the land.

BAIER: All right. And Amy -- very quickly, any Democrats you see now who are going to vote for this nominee?

WALTER: Yes. I mean I think that you still have to look at the three red state Democrats who supported Gorsuch -- Manchin, Heitkamp, Donnelly -- as being potentially open and I think Susan Collins from Maine and Lisa Murkowski from Alaska at the Republican side. They sure seem right now to be at least content with what they see.