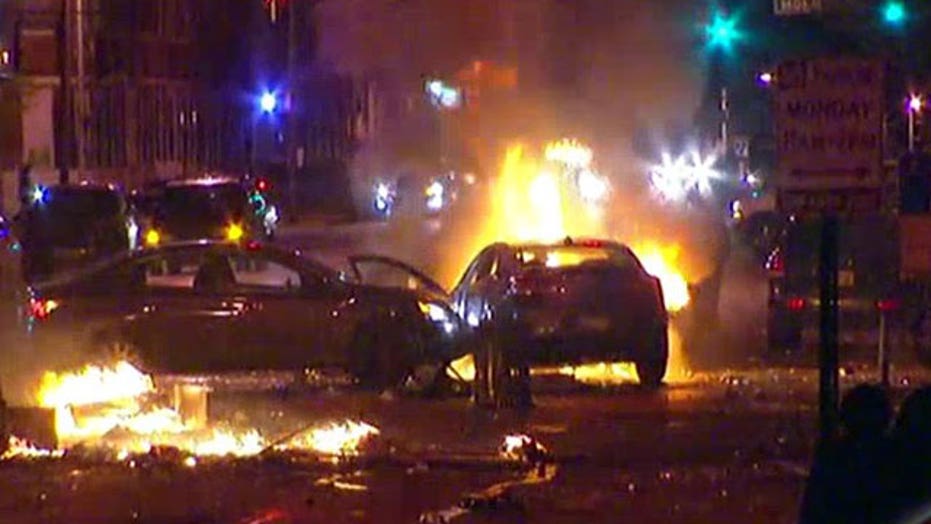 Police attempt to restore order in Baltimore amid riots

This is a rush transcript from "Hannity," April 27, 2015. This copy may not be in its final form and may be updated.

SEAN HANNITY, HOST: Leland Vittert is still standing by for us and he's on the ground in the Baltimore where all this has been happening. Leland, what was happening with the driver of that car that was racing through the fire where you just were?

LELAND VITTERT, FOX NEWS CORRESPONDENT: Well, there were a couple of cars racing through the fire, and those cars aren't going to race anywhere any time soon because they crushed them.

It's hard to understand what anyone would be thinking by doing that. It's not in protest of something. It's not in any way advancing a cause.  It's just totally destructive.

And clearly you saw the video, which is probably playing of that happening. And now you see the car that's in the center of the street.  It's actually interesting. There was a car in the center of the street a couple hours ago, and now we have two more cars. I've got a fellow walking here who has been yelling "16 days, 16 days," meaning now answer since the death of that young man that touched off all this. And it's really hard to say --

HANNITY: Leland, let me ask you. This is, what, eight days ago. The funeral took place today. Why have they not at least given somebody a clue as to what happened to Freddie Gray, because it's a mystery? Nobody knows anything.

VITTERT: That's an excellent question. That's the question everyone asks out here. And when you see the anger that's directed at the police, that's what people say to you, is that they are angry. This guy just came by and said the very same thing about him being angry. What's interesting is that the police haven't been willing in any way to come out and confront the rioters. At the same time they haven't been willing to give the rioters any answers, which is an interesting dichotomy that they're holding back and watching these stores being looted but at the same type are in no way talking to anyone.

I want to bring in a gentleman here who has been with us all night.  You've been watching this. He's got a shirt on that says "United Theological Seminary." We're going to keep our shot here on what's going on. The police have their helicopter up above. But I just want to -- you're from Baltimore, right, sir?

UNIDENTIFIED MALE: I'm a United Methodist minister and I'm a pastor in D.C., but a lot of our --

VITTERT: So you're a pastor who came up here?

UNIDENTIFIED MALE: I've come to stand with my colleagues.

VITTERT: When you watch this, what are you thinking?

UNIDENTIFIED MALE: It's very sad, of course. It's a sad commentary on today's national climate and local climate as well.

VITTERT: Do you think the police are doing the right thing by letting this go on?

UNIDENTIFIED MALE: I'm not sure about that. I guess everybody is trying to make the best choices they can.

VITTERT: That can't be a good choice, what we're watching.

UNIDENTIFIED MALE: Well, that's true, that's true. I mean, you're putting lives in danger. You're -- it's just a bunch of mayhem. So it's a very dangerous situation for everybody.

VITTERT: As you've talked to the folks on the street here, do you get the sense this is about Freddie Gray or this is just an excuse to loot and riot?

VITTERT: And clearly, Sean, we are in a part of the area that has got a lot of poverty for sure. One of the interesting things is you do hear folks who are out here. Every one that I've talked who is out here, peaceful and otherwise -- obviously most of the folks we've seen are not peaceful -- have talked about how angry they are at the police and how angry they are about Freddie Gray. What's interesting is the same police aren't really doing anything to protect all of these folks who are here.  So this police department is so violent and so out of control you would wonder why they aren't responding in that way, whether there's been order given or not. I don't know. The situation on the ground, the battle lines remain largely the same in terms of the fires and the looting down here and the police line just up there probably just 50 to 75 yards. And there's hundreds of riot officers, a SWAT vehicle, all that kind of stuff, and they're not moving down to stop what we just saw, including those fellows with those cars crashing into each other. And I think we actually have another car down there on fire as well.

Coming up here on about 11:00 in Baltimore and the city is certainly on the verge of burning tonight.