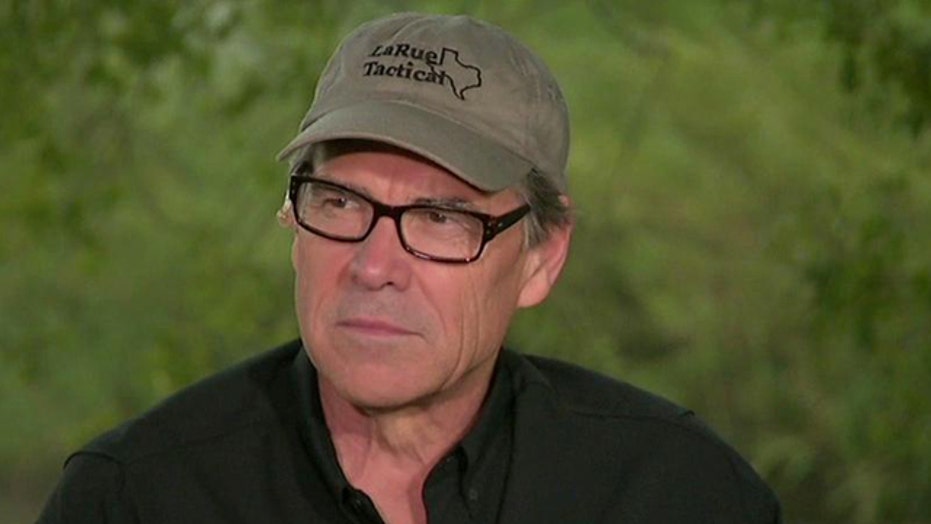 This is a rush transcript from "Hannity," July 11, 2014. This copy may not be in its final form and may be updated.

SEAN HANNITY, HOST: Back with us tonight is Texas Governor Rick Perry is with us. You know, it's been a pretty interesting week, Governor. I want to go back to the beginning. The president wanted a photo-op. What'd he say, come meet me at the airport, come meet me on the tarmac? How did that happen?

GOV. RICK PERRY, R-TEXAS:No, actually, the request was he was coming into Austin for a fundraiser.

PERRY: And I don't know exactly the top (ph) line (ph). The request come through, but -- come to the airport, shake hands and -- which is fine.  I've done that before. And it was an appropriate thing for me to do.

PERRY: But we've got some serious issues we need to talk about. And I've tried to reach out to him. I've written him letters and I haven't gotten an appropriate response back. So I said, you know, I really don't -- with all due respect, I don't want to come to the airport, be used for a photo-op and shake hands and then leave. I said, I will change my schedule -- which I did. I was supposed to be Chicago, supposed to be in Ohio over the course of the last two days -- if we can have substantive conversation about how to secure the border. And he agreed to do that, which I appreciated.

HANNITY: You know, one of the things -- I've been very critical of Republicans in Washington. I think sometimes they've been timid. They've been unwilling to use some of their constitutional authority on withholding spending. They have the power of the purse, et cetera. Governors seem to be able to get things done. I think presidents should be able to get things done.

One example, on the VA, I would have set up a 1-800 number as soon as I found out that there was institutionalized fraud and these guys weren't getting the care we promised them. Months have now passed. Nothing's happening.

You meet with the president. You told him how bad the problem is. So the next question is, when do you expect a response? Don't we need a sense of urgency?

PERRY: I think there is a sense of urgency. I think Americans understand now. As a matter of fact, with some of the information that you're going to be sharing with the American public about the number of criminal events that have occurred over the course of the last six years, and that this issue with these unaccompanied alien children can be very quickly addressed from the standpoint of staunching (sic) the flow by putting those troops on the border, along with the border patrol and the other law enforcement individuals -- that type of action by the president, number one, will help him out substantially from the standpoint of both the optics and the reality of what's going on.

HANNITY: The president said that the conversation was constructive, that you made sense, said that he had an open mind about the National Guard. Was there any timetable that was put up, where maybe he's saying, we'll get this done, I'll get back to you? How did it end?

HANNITY: The agenda in all this. I want to go back to the briefing we had yesterday. And more specifically, I want to know -- we're going to put this presentation on TV to the extent that we're able to...

HANNITY: ... and with people coming from Yemen and Syria, that's number one. That's a problem -- and Pakistan -- and people didn't know.  And number two, the number of crimes committed against Texans. That's another problem. It can't be done without manpower. So I would think that this is now hit the point of urgency. Certainly, you're hitting the urgent button in Texas. I don't see a federal government that has that sense.

PERRY: Well, but the president can deal with this. I keep going back to that. And I'm sorry if I sound like a broken record, but the fact is the president of the United States can pick up the phone to the DOD and direct them to send those 1,000 National Guard troops because that will send the quickest message that this border is secure. And if we start securing the border, all of these issues that are facing us begin to dwindle. They begin to diminish.

HANNITY: Here's -- the president talked a lot about politics in all of this, and kept asking over and over, the supplemental, the supplemental bill. Is there one thing -- if he's looking for compromise, is there one area of compromise, and that is to secure the border? Because I've interviewed a lot of Republicans. They always say secure the border first.  I know the president wants his bill, which is a comprehensive bill that includes amnesty. Should he just go along with the security? It's sort of like a boat taking on water. You plug up the hole and then you start dealing with the aftermath later?

PERRY: I have heard for too many years that the American people do not trust the current administration, nor do they trust Congress, to deal with this issue until the border is secure. So if he's serious about having a legitimate conversation about border -- or, excuse me, about immigration reform, the best way to have that move forward is to secure that border. Then we can have that conversation.

HANNITY: How come every time we come here, we're out under...

PERRY: We love rain in Texas!

HANNITY: Every time we come here, it starts pouring.

If this is one thing -- what is -- you told me privately, you didn't say on camera yet, was about maybe getting congressional leaders down here, Republicans and Democrats.

HANNITY: Congressman Cuellar, for example, a Democrat, has been outspoken, said this could be Obama's Katrina.

HANNITY: Do you think you can get a group of 100, 150 congressmen and women, senators down here and look at -- and take them on the tour?

PERRY: Well, I don't know how many we can get down here, but I think it's -- it's one of our conversations that we're having with some of the leadership to bring the congressional delegation. Michael McCaul, the chairman of Homeland Security, was here this last week. Michael had testimony, an incredibly bright, capable man who understands this issue very well. He's been here. He had part of his committee and some of the other Texas delegation, Sheila Jackson Lee on the other side of the aisle, but you know, I appreciate her being here.

But the point is, these members of Congress need to see what's going on, too. This is a major national security issue. I invite them to come.  Hopefully, we can do it and do it soon and find a resolution to this because Americans deserve it and Americans expect it.

HANNITY: Things are different. I was at -- an AEI study that came out in the last week that showed that Texas in the last -- since 2007, over a million jobs have been created in this state. Simultaneously at the same time, in California, less than 25,000.

PERRY: We lost all of those jobs during the recession, and the country's only back 113,000. During that same time, Texas created seven -- or excuse me, one million jobs.

HANNITY: Over a million.

HANNITY: And California less than 25,000. Is the country, in that sense, even on the issue of immigration and everything in between economically -- there's no income state in your tax. Your state creates a million jobs. In California, the state income tax, Governor, is 13.5 percent.

PERRY: There are two states that lost more wealth per capita than any other state.

PERRY: New York was number one. And you're fixing to add to that.

PERRY: And California was number two. These policies really matter, but states compete against each other. And at some point in time, New York and California, their people will require them to make the changes and deal with this, and they will get back to reality on taxes and on regulation, on the legal system. But that's -- that ebb and flow is how it works.

Remember when California was the golden bear...

PERRY: People all moved there and the place exploded.

PERRY: It can happen again.

HANNITY: When you look at -- you go spend a lot of time in states like California, New York. You've been to New York, and you're there, you're lobbying for people to move to Texas, and you've been pretty successful. These companies, you sit with them, you tell them the advantages of moving to a low-tax state, less bureaucracy, tort reform that played a big part, especially in the medical field.

PERRY: Over the last decade, over a thousand people a day have moved to the state of Texas. I let that speak for itself.

HANNITY: Governor, you've been very generous with your time.

PERRY: Good to see you.

HANNITY: I really enjoyed the time. Thank you, sir.