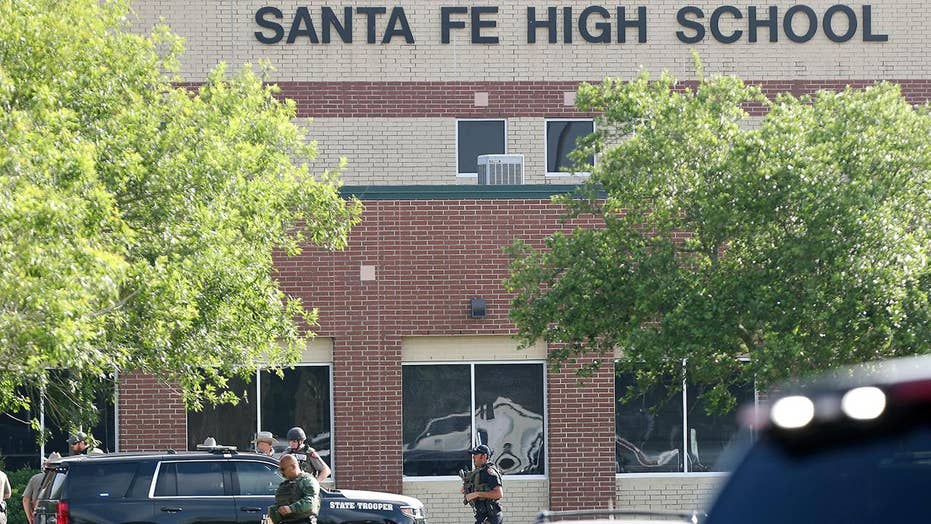 Partisans dig in after another school shooting

Can lawmakers find solutions to securing nation's schools? Reaction and analysis from the 'Special Report' All-Stars.

This is a rush transcript from "Special Report with Bret Baier," May 18, 2018. This copy may not be in its final form and may be updated.

PRESIDENT DONALD TRUMP: My administration is determined to do everything in our power to protect our students, secure our schools, and to keep weapons out of the hands of those who pose a threat to themselves and to others. We are with you in this tragic hour, and we will be with you forever.

Our administration is working closely with local authorities to investigate the shooting and learn everything we can. We are committed to working with state and local leaders to help secure our schools and tackle the difficult issue of mental health.

BRET BAIER, ANCHOR: President Trump today and President Trump in the last school shooting, where he was referring to what they were going to do moving forward. Again, this school shooting in Santa Fe, Texas, comes as you take a look at the mass shootings this year so far. The list includes three or more victims killed, not conventionally motivated crimes or killings in private homes. But you now have Santa Fe, Texas, ten killed here.

We heard from the White House today that the Education Secretary Betsy DeVos, has her school safety commission has been stood up today, and that it will meet for the first time next week. What about this? We'll start there on the day's events. Let's bring in our panel" Matt Schlapp, contributor with The Hill; David Catanese, senior politics writer for U.S. News and World Report, and Noah Rothman, associate editor of Commentary magazine. Noah, let me start with you, where we're going and where the conversation goes. We come to this point every time there's a shooting, especially a school shooting.

NOAH ROTHMAN, COMMENTARY: Yes, they have become so common at this point, so tragically common, that our response is almost ritualized. Conservatives respond by talking about conservative issues, Democrats respond by addressing guns. This doesn't look like a weapons issue. We saw Senator Chris Murphy say that we needed to talk about weapons, but the perpetrator apparently from what we know had a sawed-off shotgun, which is illegal, and a revolver, which no one is talking about regulating. We don't know how they were stored.

But at this point, I think it's pretty safe to say that we have a copycat issue here. And that is a media issue. There is enough scholarly literature to suggest that young students are seeking to emulate the horrible legacies of people like the Columbine shooters, which is evident in this shooter who was wearing a trench coat. And we need to really talk about press coverage on that point, and that is something that I don't think anybody really knows how to address.

DAVID CATANESE, U.S. NEWS AND WORLD REPORT: You play the clips, Bret. Three months ago President Trump basically said identical same thing as he said today. And it's probably sad to say but in three to four months now, we will probably be in the same situation.

You have the lieutenant governor of Texas suggest today, I heard, that the problem was the amount of doors in the school, that it had nothing to do with guns but it had to do with entry points, and if there were fewer entry points into the school, the shooter could be stopped. So there is no agreement on this issue between Republicans and Democrats and I don't think we will see an agreement until you have a change, an upheaval of power in Washington.

MATT SCHLAPP, THE HILL: To me it's time to get practical and to think about the basic steps we could take. I drop off four of my kids at school every morning and an off-duty police officer brings the cars in for the drop off but then leaves when school starts. I think there are too many schools that are vulnerable to attack. And we have these big constitutional questions, questions about violence in society. I don't know if these are going to get resolved politically, but I know one thing we could do is we can harden these schools, we can protect our kids, and we can get real with the fact that there is violence in our society and it's a terrible, terrible thing when we do nothing to stop it.

BAIER: Let's move to another topic, and that is the investigation. The Russian probe led by special counsel Mueller, Rudy Giuliani, the president's attorney now has been out talking to a number of different networks, here at Fox, and others. Here he is talking about the president, how he would testify.

RUDY GIULIANI, PRESIDENT TRUMP'S ATTORNEY: The president is not going to lie, let's get that straight.

CHRIS CUOMO, CNN: What gives you that confidence?

BAIER: The question is, Noah, are they setting up potentially to have the president potentially talk to Robert Mueller?

ROTHMAN: It sounds like that. Apparently there is some effort ongoing. Mr. Giuliani spoke with FOX News and said that there is some preparation, almost debate prep. They are going to be returning to the area in Bedminster, New Jersey, where they did some debate prep in 2016 and they are going to walk the president through these talks. And there's negotiations about what they're going to speak to. So yes, apparently the president is going to be deposed by the council, which is a fraught prospect, but I don't think the president could have ever avoided it.

BAIER: Meantime, David, we are waiting for this inspector general report, and there's all kinds of reports including "The New York Times" about the FBI using informants inside the Trump campaign at the early stages of that Russia investigation.

CATANESE: There are reports about that but we don't know exactly who the informant is, the accuracy of this report, what the informant's goal was if there was an actual informant. So lot of questions remain around that. On the Mueller investigation, though, referring to Rudy Giuliani's comments, I think the most significant thing that came out of his mouth this week is that Mueller seems to say that he will not indict the president. He doesn't believe he can indict President Trump. So I think the next key thing to watch in this Mueller investigation is, who is in his sites? Is it a member of the president's family? Could they be charged? Could it be Jared Kushner? Could it be Donald Trump Jr.? Or are all the fish already fried? Are all the charges that we know, is that basically going to be it? I think that is the main next question to watch in this Mueller investigation.

SCHLAPP: Yes, absolutely. I think the problem for Robert Mueller is if you look at his poll numbers, they have been coming down and coming down. And it looks like the lawyers he hired really have a political axe to grind against Donald Trump. So I actually think politically for the first time I don't think there's a downside to the president avoiding this conversation with the special counsel's team.

I think the second thing is -- you've seen James Clapper on CNN talking about how it was a good thing to have a spy in the Trump campaign. It's the most audacious thing I think I've heard of. And I think we need a Tower Commission much like Ronald Reagan did. Pick three people of eminent reputation who understand the national security threats to using the national security and intelligence community apparatus to spy on our political opponents. I think these are very big question and we owe the American people some real answers and we've got to have some safeguards.