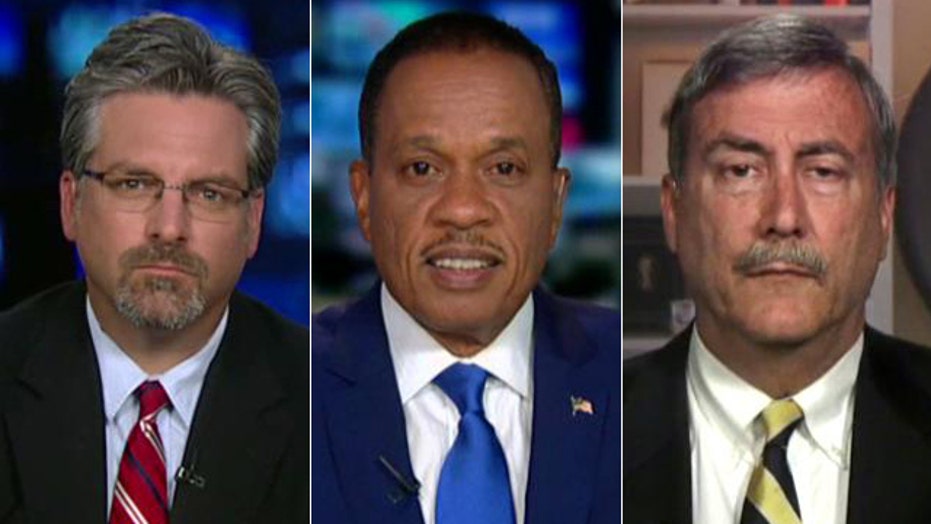 Reaction to the races across America

This is a rush transcript from "Hannity," May 20, 2014. This copy may not be in its final form and may be updated.

SEAN HANNITY, HOST: But first, for more reaction, we bring in our panel tonight, from The Weekly Standard, Steve Hayes is with us, Fox News political analyst Juan Williams, and from the University of Virginia Center for Politics, Larry Sabato is with us.

You know, as I look and listen to what they're reporting here tonight, Steve, I'm thinking, you know, Jack Kingston is a conservative, Perdue is a conservative. They're trying to make every race Tea Party versus establishment. I don't think it fits in every case, do you?

STEPHEN HAYES, FOX CONTRIBUTOR: No. I think that's right. I think the Tea Party versus establishment meme that has been pushed by the mainstream media, while there's some truth to it, has been really overdone.

If you go back and look at the debates, the Georgia Senate debates on the Republican side -- you know, I remember the third debate, which was back in February, you had Perdue basically open up with an opening statement in which he called for bold entitlement reform. Yes, he later stumbled on the question of revenues versus tax increases, but this is not somebody who is sort of an Arlen Specter or Castle type from Delaware. He's pretty conservative.

HANNITY: Yes. Well, what do you think, Larry, as we look at the races here tonight? We had some mixed results. We had mixed results last week. The Tea Party candidate in Nebraska won. I would think everybody would agree they didn't want to have a situation like Todd Akin last time, and that was part of where some people were getting more involved in the primary process, right?

They had hoped that Matt Bevin would either beat Senator Mitch McConnell or give him a real scare, thereby launching him weakly into the general election. Well, McConnell won handily, so he's in good shape in this deeply red state, where President Obama has about a 35 percent approval record.

Now, in Georgia, yes, partly, it depends on how these two-runoff finalists conduct their campaigns. They could end up destroying one another, but I kind of doubt it.

I think, again, the Democrats were hoping that Congressman Broun or Congressman Gingrey would get the nomination because they were expecting one or both of them to be another Todd Akin or a Richard Mourdock. Well, they didn't get it. Instead, they're going to get a more mainstream conservative in this red state, where President Obama is well below 50 percent popularity. There you go.

WILLIAMS: Republicans -- Republicans are strongly positioned here to do very well in the mid-terms in large part because of who turns out. And right now, if you look at those polls that you're citing -- I look at them a little differently, Sean, but what's clear is that, in fact, it's Tea Party energy that has people who are the people who are most likely to turn out and vote in this election. And unless Democrats can counter that, you can expect a big night for the Republicans.

I will say this, that as we look at these races individually, I think you get a different picture, and the picture is contrary to what I'm hearing from my colleagues on this panel, that the Tea Party really did get squashed. I mean, the only Tea Party victory you can talk about...

HANNITY: You know, I'm having a hard time...

WILLIAMS: You said "balanced." It was that Sasse race in Nebraska. Other than that...

WILLIAMS: Other than that...

WILLIAMS: ... the Tea Party has been crushed...

HANNITY: Jack Kingston, who's in the runoff, has a 97 percent approval rating from the American Conservative Union!

WILLIAMS: That hasn't mattered to Tea Party people in the past. They've seen him as a...

WILLIAMS: ... as an establishment conservative.

HANNITY: You cannot honestly cast this battle tonight in Georgia as Tea Party versus establishment. I'll let Larry and Steve weigh in. What do you guys think? Steve?

SABATO: No, go ahead.

HAYES: Your point on -- your point on Jack Kingston is a good one. I mean, he's been a pretty solid conservative. He may have done some more spending over the long course of his career than some Tea Party conservatives would like.

But this is not somebody who, again, fits the profile of somebody like an Arlen Specter or the kinds of candidates that gave rise to the Tea Party in the first place in 2010. There you had Republicans -- you had Tea Party candidates challenging, you know, establishment Republicans, but really very moderate Republicans, who often voted with Democrats, whether you're talking about Arlen Specter or you're talking about Castle in Delaware or others.

HANNITY: Yes. Larry, we'll give you the last word tonight.

SABATO: Well, there's a learning curve here for Republicans, whether they're Tea Party or mainstream. They realized that both the establishment and the Tea Party threw away some Senate candidacies in 2010 and 2012. They're looking for winners, people who can put together a majority coalition in November. So far, they have been finding those people.

HANNITY: All right, guys. Good to see you all. We appreciate it.