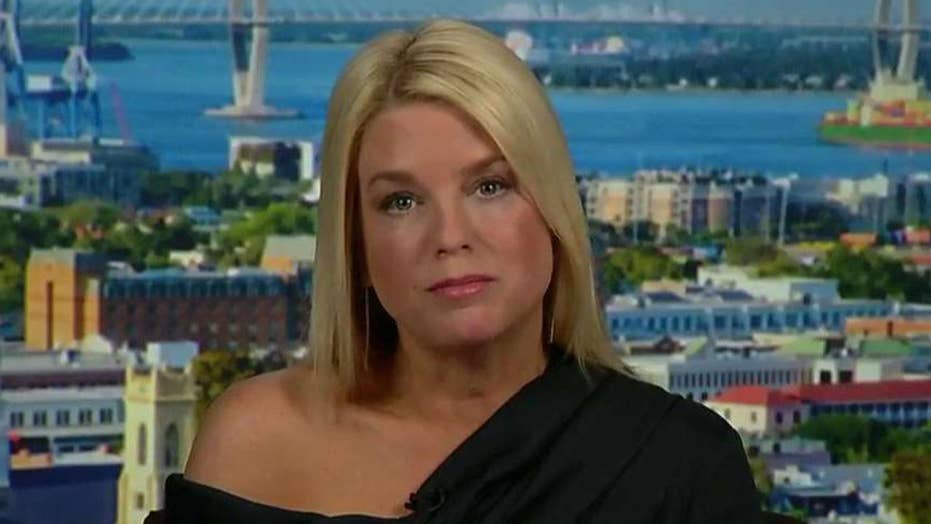 Pam Bondi speaks out about the death of two Florida deputies

This is a rush transcript from "Your World," April 20, 2018. This copy may not be in its final form and may be updated.

Two sheriff's deputies shot and killed in Florida yesterday while eating at a restaurant. The attacker was found dead shortly thereafter.

But what prompted any of this?

Sorry to have you here under these circumstances, but what we know about this shooting? Anything new?

Neil, it has -- it's been really unreal.

To set the stage for you, Gilchrist County, it's a small county. It's like a hometown county. They have very few deputies. Sheriff Bobby Schultz obviously is distraught, as well as his entire force.

And we had two deputies, Deputy Taylor Lindsey, and Sergeant Noel Ramirez -- he'd just gotten promoted to sergeant -- sitting in a restaurant, glass front, having lunch about 3:00.

And someone came in and just didn't even come in the restaurant, through the window assassinated both deputies, and then took his own life.

CAVUTO: So he didn't go into the restaurant, but he saw them. He was clearly marking them and shot them from outside.

BONDI: What everyone is saying now is they were ambushed.

And, Neil, this is what's so important for all your great viewers out there to know. Sergeant Ramirez had two small children, a 5-year-old son and a 3-year-old daughter.

BONDI: And we have been working with GoFundMe, who they are amazing corporate partners, to set up -- it's not up yet, but to hopefully set up a trust for these two kids.

So if your viewers are watching, that will hopefully be up soon. And it was under shooting Noel Ramirez, Sergeant Noel Ramirez. But that's not up yet.

But we're working on that. Neil, when this happened -- this is what Florida does so well together. About 12 neighboring sheriffs came in to Gilchrist to help with this and to be there. All these other sheriffs to help emotionally support Sheriff Schultz, as well as my advocates, my victim advocates have been with the families all day today.

CAVUTO: Do we know anything more about this? If we're going on the assumption that he killed himself, anything about him or what his beef was with law enforcement or anything else?

And this is just me speaking. I don't know this from law enforcement. It's a very small community. And I think everybody knew each other. But I'm going to wait and let law enforcement, of course, release that.

CAVUTO: Understood. No, I understand.

BONDI: When the investigation is completed.

But that, of course, wasn't the only -- this was horrific but, of course, another event happened in Florida today.

CAVUTO: Yes, that is what I was just going to ask you about, this school shooting or what could have been an awful school event. Update me on that.

So, Sheriff Billy Woods, who is a great sheriff, he was in Gilchrist County, because, of course, he is friends with Sheriff Bobby Schultz. And he was there adding emotional support when he got a call that there was an active school shooting in Ocala.

And he asked me to tell you that Deputy Jimmy Long (ph), not only is he 25- year deputy. He's a school resource officer at this school. And that school is so blessed that he was there.

And Governor Scott also had deputy Jimmy Long on his commission. That's how good this deputy was.

CAVUTO: I'm sorry, but what happened at this school?

So, in all of our books, Deputy Jimmy Long is a true hero, as well as that principal at the school. And the young student -- he's 17 -- who was shot is going to be fine.

CAVUTO: I was just going to ask. I'm glad to hear that.

Now, obviously, your state is the first in the nation, thanks to Governor Rick Scott, to put in new policies to treat with -- deal with guns and who holds them and who can get them at a certain age, and pushing it up to 21 to get a lot of the assault weapons common in a lot of attacks, including in your state earlier in the year.

Did that help the situation today? Did that come into play at all?

BONDI: At the school shooting, Neil, I think we just happened to have a deputy there, a school resource officer, who had been trained very well.

And that is thanks to Sheriff Woods' training. And he had been trained through law enforcement. My office had participated in that. A 25-five- year veteran who was not scared. That is what law enforcement officers do. They run to harm, not away from it.

Pam Bondi, thank you very much.