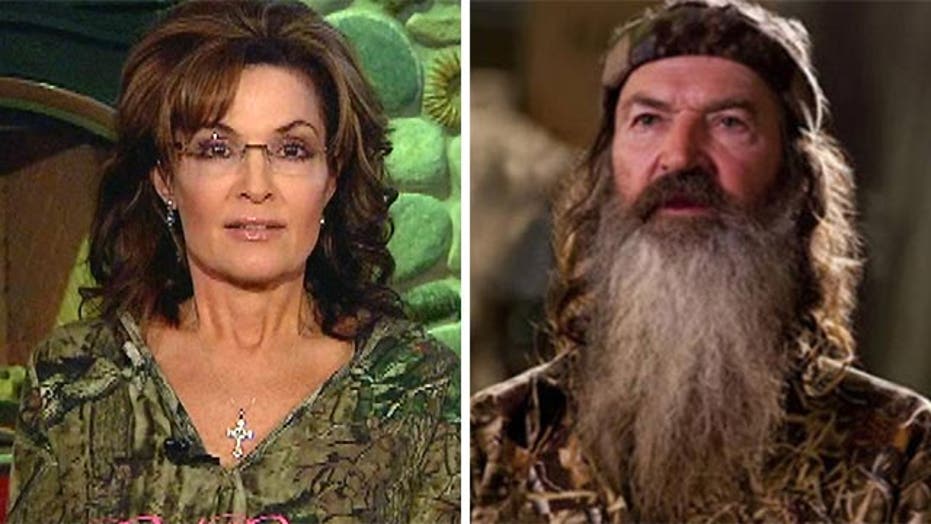 This is a rush transcript from "Hannity," December 19, 2013. This copy may not be in its final form and may be updated.

SEAN HANNITY, HOST: Millions of people tune in each and every week to watch "Duck Dynasty," but fans will soon no longer be able to see the Robertson family patriarch, Phil, on the show. Now, here's why. In an interview with GQ magazine, Phil made his opinion about his faith and his views on homosexuality clear. He said, quote, "It seems like to me a vagina as a man would be more desirable than a man's anus." He then went on to say, "That's just me. I'm just thinking there's more there. Now, she's got more to offer. I mean, come on, dudes. You know what I'm saying. But hey, sin, it's not logical. My man, it's just not logical."

Now, within hours, A&E networks made a knee-jerk reaction by kicking Phil to the curb and releasing this statement that reads, quote, "We are extremely disappointed to have read Phil Robertson's comments in GQ, which are based on his own personal beliefs and are not reflected in the series 'Duck Dynasty.' His personal view is in no way reflects (sic) those of the A&E networks, who have always been strong supporters and champions of the LGBT community. The network has placed Phil under hiatus from filming indefinitely."

Now, the "Duck Dynasty" patriarch responded to the news. In a statement to FOX, he said, quote, "I myself am a product of the '60s. I centered my life around sex, drugs and rock-and-roll until I hit rock bottom and I accepted Jesus as my savior. My mission today is to go forth and tell people about why I follow Christ and also what the Bible teaches. And part of that teaching is that men and women are meant to be together. However, I would never treat anyone with disrespect just because they are different from me. We were all created by the Almighty, and like him, I love all of humanity. We would all be better off if we loved God and we loved each other."

By the way, tonight we want you to join the conversation. Go to our Facebook page, tell us if you think A&E was out of line by suspending the patriarch, Phil. Plus, it's time to "Trend at 10." You can sound off on Twitter, my account, @seanhannity, use the hashtag #Hannity over the course of the next hour.

Joining me now with reaction, the author of "Good Tidings, Great Joy," former Alaska governor, FoxNews contributor Sarah Palin. Governor, good to see you. Welcome back to the program. Wow. Look at that fireplace!

SARAH PALIN, FOX CONTRIBUTOR: Thanks so much, Sean.

PALIN: It's cold up here.

HANNITY: That looks like a "Duck Dynasty" camo shirt. Is that it?

PALIN: We wear camo up here every day. And it's funny that, ironically, I was wearing camo this morning when your producer called to ask if I'd be on the show. And I'm, like, sure, and I'll keep my same clothes on, if you don't mind.

HANNITY: OK. Leave it there. All right, tell us first of all what - - you have spoken out. Ted Cruz has spoken out. Bobby Jindal's spoken out. And obviously, the country is speaking out about this. I want your thoughts on this. Go ahead.

PALIN: Well, this is all about freedom, free speech. You know, so many American families have spilled blood and treasure to guarantee Phil Robertson and everybody else's right to voice their personal opinions. And once that freedom is lost, Sean, everything is lost in our country.

To get rid of the most popular patriarch on television today -- I tell you, there are other networks that would just nab these guys up in a heartbeat. A&E really screwed up on this one.

Doesn't this have a lot to do with religion?

PALIN: Well, you know, they're not in your face, though...

PALIN: ... which I think is so refreshing. You know, they -- they talk about tradition. They live out a traditional Judeo-Christian ethics that our nation is founded upon. And I think that that not only is refreshing, but it's inspiring and empowering for the rest of America to be emboldened and to say, "Hey, if they can do it and be so popular and not mocked and criticized perhaps until now as others have been, well then, the rest of us can do it, too."

PALIN: No, because I am a freedom of speech kind of gal. But I'll tell you, I got a lot of e-mails this morning on this one, with A&E, where a friend -- in fact, a friend of mine who happens to be gay, she e-mailed me to say she is outraged at A&E for the hypocrisy here, for the things that they air on their program that she finds offensive, yet A&E doesn't fire a star or somebody involved in their programming based on what they've said, but they would when it comes to Phil on "Duck Dynasty."

And this friend, she said that she would boycott A&E and that network. And she's not the only one. I've received many, many e-mails from people saying, you know, why give them our money, our eyes, our ears, our resources? There are other channels out there to be watching.

HANNITY: You know, this specifically tells me, though, that the religious aspect of this is GQ was asking him specifically what he thought was a sin. And he mentioned a number of things. It wasn't just this one particular issue here. In that sense, it was a pretty traditional view of homosexuality in terms of -- from those coming from a Christian faith.

Do you see the collision with religion here? What is your thought on that part of it?

HANNITY: Well, what Phil was saying in -- he was reciting a part of the Gospel. The liberal left must feel that the Gospel, then, is insulting and offensive because Phil was just repeating what is in the Bible. And what Phil went on to say was that all sins are equal and we all sin. So we all need a savior.

And I say that at this time, this Christmas season, now is the time where, like the three wise men, we can seek that savior, we can find that savior, and then our problems will be solved. That's what Phil was saying.

HANNITY: Do you think, as I think, that there's going to be an awful lot of Americans that are going to speak out about this -- remember when they rallied to Dan Cathy (ph) over at Chik-fil-A, when -- when he was -- you know, spoke out against gay marriage? Would you expect the same type of reaction here?

PALIN: Absolutely! You're going to see people wearing their camo. You're going to see people wearing their red, white and blue bandanas and be out there with their duck calls and everything else, as this manifestation of support for a family that is traditional and strong and they circle the wagons when times are tough and -- and -- that is so Americana. And it's patriotic. It's beautiful. It's part of the heart of America. And we all need to be out there promoting and protecting the heart of America. We can do that by showing support for "Duck Dynasty."

HANNITY: Now, let me ask you about A&E. A&E -- isn't that the show of "Growing Up Gotti," a show that was built around the family of a known mobster and murderer? They have the "Bates Motel," which according to MRC (ph), had in it, you know, for example, graphic rape and violent stabbings and hints of incest in a particular thing and a strip club. There are shows that are dedicated -- the "L-Word" is on Showtime. I don't see conservatives demanding that these shows go away. What is your reaction to A&E in particular in this instance?

PALIN: Yes, my reaction to A&E, again, is their new slogan, "Be original," does translate into "Be stupid" because if they have such a hypocritical view of what is acceptable and not acceptable, well, that is going to offend the majority of Americans.

Bottom line, Sean, is A&E has chosen to marginalize and tried to stifle the freedom of someone who is filled with faith in the Gospel, that being Phil from "Duck Dynasty." And Americans -- we're smart enough to understand what's going on here. We're also smart enough to understand that we do not have to promote and give business to a network like that, if we, you know, don't believe in the action that they just took. And A&E is going to feel it.

HANNITY: You know, it was an interesting on TMZ tonight that, in fact, that A&E knew his longly (ph) held opinion on this for a long time. And in an interview back in 2013 in April, Phil told Sports Spectrum (ph) TV that the network attempted to take out the words "in Jesus's name." And let me play this for you, get your reaction.

PHIL ROBERTSON, "DUCK DYNASTY": When we pray, we said, "in Jesus's name, amen." Now, I don't have a verse that says you must always use -- pray in the name of Jesus, but it's a very good idea, I think. So when they -- they would just have me saying, "Thank you, Lord, for the food. Thank you for loving us, amen." So I said, Why would you cut out "in Jesus's name"? They said, well, those editors are probably doing that and they just think, you know, they don't want me to offend some of the Muslims or something.

HANNITY: How does A&E -- do you see a way for them to get out of this, considering the pressure they're getting from GLAAD and now, obviously, Christian conservatives have engaged in this battle?

PALIN: Well, A&E can do one of two things. They can either succumb to the thought police and chicken out, and you know, not allow freedom of speech, especially a guy's personal opinion that he's voicing. Or they can try something that's just a little bit brave, and that is to acknowledge for all the world to hear that, hey, even Christians have a voice that deserves to be heard. And there can be debate on television. A&E has a choice here.

HANNITY: You know, Governor, there's one great thing about America and television in particular and radio in particular. If you don't like it, you can actually change the dial. There's only one exception, this show. That's the only one you're not allowed to tune out.

PALIN: That's right. And hey, you know, our new show that's coming out on Sportsman's Channel, I think was thinking about that this morning, too. Maybe "Duck Dynasty" needs to scoot on over to...

HANNITY: There you go.

PALIN: ... that new network to chart (ph) some things up there. And I'm sure they'd be welcomed with open arms.

HANNITY: Governor, you want to create a huge controversy, talk about religion, I guess. But great to see you. Merry Christmas, Governor. And all the best to you and your family.

PALIN: Merry Christmas. Thank you so much.