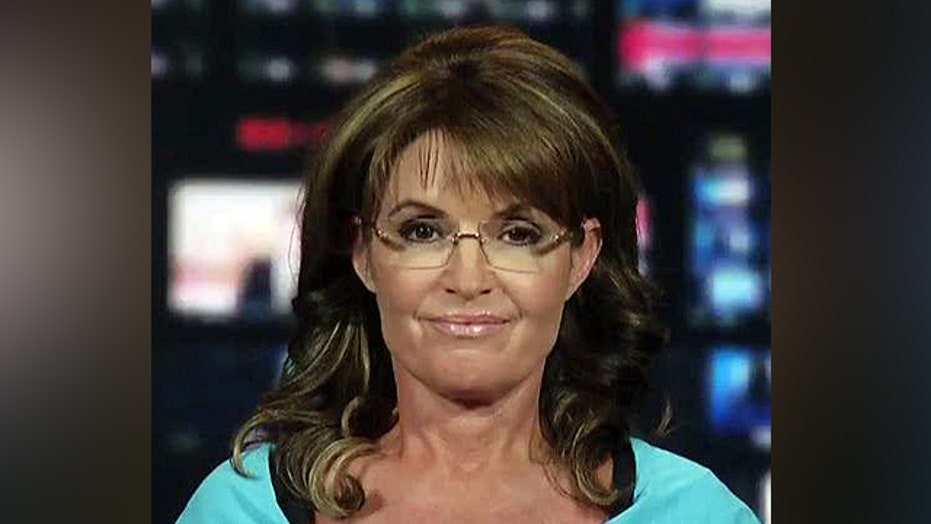 President lashes out at political opponents over the budget battle

This is a rush transcript from "The Kelly File," October 17, 2013. This copy may not be in its final form and may be updated.

MEGYN KELLY, HOST: So, the president you heard there suggesting that nothing has done more damage to our credibility in the world and our standing with other countries than this latest D.C. fight. Really?

Joining me now, former Alaska Governor Sarah Palin, she's a Republican and with the 2008 vice presidential candidate and she's a Fox News contributor. Governor, good to see you again. Your thoughts on that remark by the president?

SARAH PALIN, FOX NEWS CONTRIBUTOR: I think that remark is one of his more out of touch remarks that we've heard in recent days. No, what emboldened our enemies and what empowered competitors was his promise to fundamentally transform America from being a solvent, free, exceptional country into something that we're not going to recognize.

Also, what has emboldened enemies is he doubling of our debt since he's been elected, putting us on a path towards bankruptcy and then locking up pipe lines and resources that will result in us being more reliant on foreign imports for energy.

And then, of course, most recently, Megyn, he is using our military, those who would fight against our enemies, our military, our vets, shutting down their memorials and holding them hostage in terms of budget deals, threatening to withhold paychecks for our brave men and women.

KELLY: I want to ask a question.

PALIN: -- second highest in the industrialized world. That empowers our competitors.

KELLY: I want to ask you a question, Governor. Let me get this in because you heard Ed Henry talking about the hit that the Republicans took on the generic ballot. And there are a lot of people who watch and say, OK, I stood with Ted Cruz, I stood with Governor Palin, I stood with those who took a principled stand on issues like debt and ObamaCare, but I don't want to lose the House of Representatives because it's the only body that the Republicans hold, and these people who see the way you do, they don't want to lose that body. So your thoughts on how the generic ballot has been affected negatively for the Republicans, according to what Ed just reported?

PALIN: People who see the way that I and Ted Cruz and Mike Lee and a whole lot of other Americans see that we are taxed enough already. Of course, that's the acronym for the Tea Party movement, we are taxed enough already and we believe that the constitution, that's the blueprint that leads us towards a more perfect union and will fight very strong for that. So if the GOP standing strong on the planks and the platform that represent everything that I just mentioned, if we stand united, well, then we won't lose the House, and we could even win back the Senate.

I tell you, fiscal conservatives are more energized than ever after last night's deal where Americans came out as the losers because we're just going to incur more and more debt, this unsustainable spending spree that Barack Obama is on. No, we're saying enough is enough and we are energized.

KELLY: What's going to happen now? Because you had sent out and posted on your Facebook something suggesting that you might get behind some potential challengers to existing Republicans who are up for re-election from Mitch McConnell in Kentucky to Senator Lindsay Graham, down in South Carolina, you can see the others that you mentioned here on the full screen. Are you prepared to back challengers to these Republican senators in their contest?

PALIN: I've been saying for years that robust competitive primaries make for a better political system. It makes people work harder and express more articulately what their record is and what their intentions for our country is. So as for the individual races, I'm going to see who the opposition to the sitting kind of status quo politicians are, and we'll go from there. But Megyn, here's the deal. What we're talking about right now, the enemy of America's economic freedom is this fundamental transformation of America.

The enemy of the enemy is my friend, is any common sense conservative's friend. So we do have to consider a politician's record, truly what it is they intend to do to stop this fundamental transformation and stripping away of our economic freedom, and those who can't stand strong to defend our republic, to defend our constitution, heck, yes, they've got to be primaried, otherwise we're going down.

KELLY: Governor Palin, thank you so much for your thoughts. And we appreciate you being here.