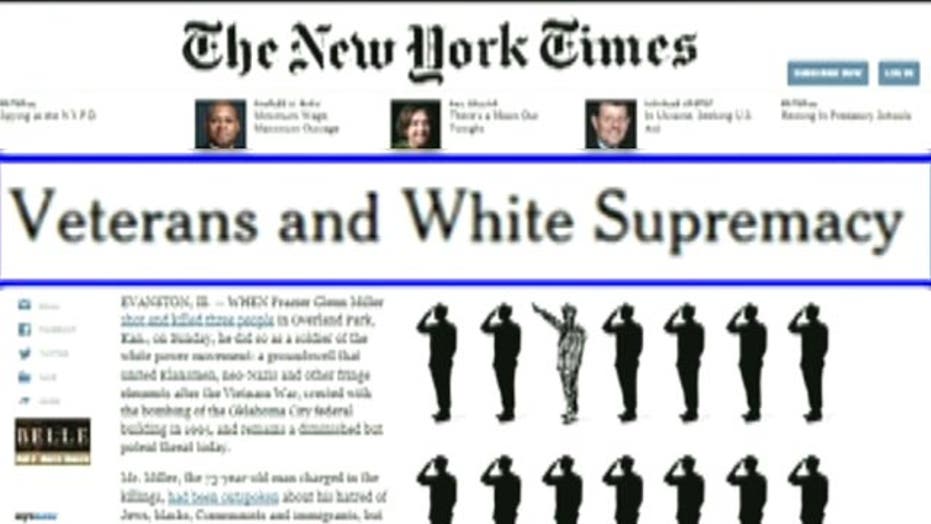 This is a rush transcript from "The Kelly File," April 17, 2014. This copy may not be in its final form and may be updated.

MEGYN KELLY, HOST: Developing tonight, growing anger from veterans across America tonight after a New York Times opinion piece is posted titled "Veterans and White Supremacy." It links America's veterans to hate groups and suggests that somehow, they, the vets represent an increased risk to our safety and our citizenry. And look at the graphic we're about to show you.

Paul Rieckhoff is the founder and CEO of Iraq and Afghanistan Veterans of America and he served as a first lieutenant and infantry rifle platoon leader in the Iraq war from '03 to '04.

Paul, good to see you again.

KELLY: And so, what are you hearing from veterans about this piece?

KELLY: What are we seeing here?

RIECKHOFF: Look at the graphic. I mean, you know, this says it all. I don't even have to really comment except to show the graphic and the title. And to even try to link veterans with white supremacist or any other type of extreme group is offensive. But also it's not factually based. I mean, his argument is garbage. It isn't supported by the facts and is really folding into this stereotypical narrative that veterans are either homicidal maniacs or victims which we have to fight back against every single day.

KELLY: She says look, the facts are there to support her theory that not all veterans are linked with white supremacists but that enough of them are that we need to be calling attention to it. And she points to a 2009 study by the Department of Homeland Security that made this linkage as her evidence.

RIECKHOFF: Right. Which is then refuted by most experts in the field. Not to mention, the military is probably one of the most diverse major organizations on the planet.

KELLY: OK. But let me stop you there but I'll give you the floor. She seems to acknowledge that -- she says and I quote, "A vast majority of veterans are neither violent nor mentally ill but it would be irresponsible to overlook the high rates of combat trauma among the 2.4 Americans who have served in our wars in Iraq and Afghanistan."

RIECKHOFF: Yes, to assume that high rates of trauma equate to homicidal behavior or extremism, it's a huge leap and it's not supported by the facts and the military actually worked very hard in the late '90s to push all extreme elements out of the military. So, they've been very aggressive in tackling this issue. And you know, what really is shocking is the title, and no matter what she says after that title and that graphic, it's really hard to take her seriously. So, that's why veterans across the country are outraged.

We want an apology from the New York Times, we want to focus on more important issues and the positive aspects of what our veterans are doing. They're leaders, they're citizens, they're fathers and mothers. They're doing great things and especially after the Fort Hood coverage, which in large part was terrible, we've got to push back against these stereo types and hold the media accountable.

KELLY: And she's talking in this piece and it seems -- she's working on a book about this issue and has been for years. But she seems to be focusing this on the shooting in Overland Park, Kansas.

KELLY: Where this white supremacist who was also a veteran came out and, you know, he was a pusher of the white power movement.

KELLY: And so she seems to think this is the latest news hook to validate her theories and she comes out and writes and I quote, "Would this man have received greater scrutiny had he been a Muslim, a foreigner, not white, not a veteran? The answer is clear and alarming."

RIECKHOFF: The answer is not clear. What is alarming is this article and her entire train of thought here, which is been widely refuted by most experts in the field and by the veterans community, and I think she -- I would love to have her on your show to defend this. I want to see her defend this against the veterans of this country, the American public, it's just not supported by --

KELLY: She basically points to things like Timothy McVeigh.

KELLY: This guy that I just mentioned and says, you know, we need to --

RIECKHOFF: Right. Well, you can cherry pick any element of their past and try to create a connection between --

KELLY: And said, we need to be keeping a greater eye on them.

RIECKHOFF: Undoubtedly. Veterans are unfortunately one of the few minority groups that it's still OK to stereotype apparently, and we've got to be defensive about that especially after Vietnam. We know how the country turned against their veterans in a shameful way and I think all generations are especially protective of this new generation of veterans who have done so much over the last 10 years and really need some care in certain areas. We've got to focus on suicide and unemployment. But for the most part there, I think they are out there doing great things and representing this country better than almost anybody.

KELLY: And not to any white supremacists groups.

RIECKHOFF: No, the opposite.

KELLY: Thank you for your service.