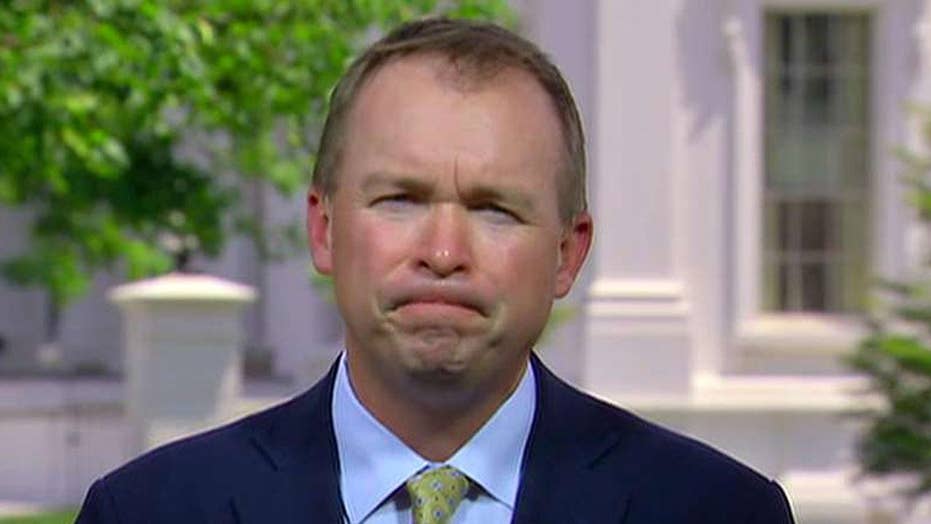 Mick Mulvaney discusses the timelines for the reforms

This is a rush transcript from "Your World," July 24, 2017. This copy may not be in its final form and may be updated.

NEIL CAVUTO, HOST: All right, maybe not so much the Dow, but if you look at the Nasdaq, fully working on the assumption that some goodies are coming from Washington. Are they?

The White House budget director, Mick Mulvaney, joining me earlier on Fox Business to say, well, when it comes to health care, tax reform, they are. Take a look.

Seeing a lot of those same dynamics in the Senate right now. And I think, ultimately, a health care package will pass out of the Senate, will pass the House, will be signed by the president.

CAVUTO: When? When do you think it will be?

MULVANEY: You know, I actually think they have to do something before September.

As a former elected official, I really wouldn't want to go home without having followed through on my biggest promise. What do you tell people?

Even if somebody else is the person who killed it, how do you defend your party, as a Republican, by saying, well, thanks for giving us the House, the Senate and the White House, but we didn't actually follow through on our biggest promise?

CAVUTO: As a former founding member actually of the Freedom Caucus, the conservative -- group of conservative who are not keen on, you know, more spending or even keeping tax hikes in effect, they seem to be open to the Senate measure, the one that didn't seem to be going anywhere, that would include the taxes on the upper income for, you know, the Medicare and related expenses.

Now, how did you feel about that? How would you feel if a final draft or something that comes out of the Senate includes keeping taxes like that in there?

MULVANEY: Sure, a couple difference responses to that.

At one hand, politics is the art of the possible. And if that's what it takes to get ObamaCare to get repealed, that certainly wouldn't bother me, if I put my old Freedom Caucus had on. I think a lot of my friends in the House feel the same way.

But I also add to that the fact that tax reform is coming next. We know that it is. It may be a second bite at the apple to try and fix different parts of the tax code.

And I do encourage the Senate to go ahead. If that's what they think it takes to get rid of ObamaCare on that side of the building, they should go ahead and press on with that, and we will deal with taxes next -- in the next chance we get.

CAVUTO: But you could live with that yourself, as the budget director?

MULVANEY: Again, as the budget director, as a member of Congress, what am I -- former member Congress -- what am I interested in? Getting rid of ObamaCare, because I think, more than anybody else, we get down in the weeds over here, and we see what the existence of ObamaCare is doing to people.

There's so much talk about, oh, how many people will or won't be covered, when what we see every single day is people back home every single day actually losing their coverage right now, in the real world, under ObamaCare. So getting rid of that has to be the highest priority.

CAVUTO: If I can get back to tax cut thing, I find that a lot of Democrats say they want to work with Republicans. A number of Republicans say that, all right, we will throw an olive branch to you.

And the latest do so, sir, was Chris Collins, the moderate Republican of the state of New York. I want you to react to this. This is in a conversation on our air about how to proceed in a bipartisan way on tax cuts.

REP. CHRIS COLLINS, R-N.Y.: There is the potential of getting some Democrats to come on board. It might not be as massive a cut as some of us would like, but if we can get those corporate rates down, that money would be reinvested in jobs and the economy.

COLLINS: We could have and America would actually applaud something called a bipartisan tax reform.

COLLINS: They would actually think, oh, my God, Congress and D.C., they're finally doing their job.

CAVUTO: You know what I read into that? It might not be as massive a tax cut. In other words, to bring Democrats on board, assuming that's what you need, you can't have as big a tax cut. Do you agree with that?

MULVANEY: I think what you're hearing from the administration, we're all on the same page. I talked to Director Cohn this morning. I have talked to Secretary Mnuchin about this. We have had regular conversations with the president.

We want the biggest tax cut, we want the most sweeping tax reform that can actually pass. I happen to personally think, as I stand here, I disagree with my colleague, my former colleague, say I think we get a better tax package out of a Republican plan.

But if there's an argument to be made for a bigger, bolder, better tax reform plan, tax cut plan coming out of a bipartisan deal, that's certainly something that we would consider.

CAVUTO: It doesn't sound like it would be bigger and bolder, though. Anything bipartisan would water it down. Right?

And I think -- and that's my gut reaction. I'm trying to be gracious to my former colleague. But I think as soon as you invite 10, 12, 15 Democrats to the table, you're going to see it simply get watered down.

And we can't have it. We have to get back to a healthy American economy. You have to get to 3 percent growth. That's what MAGAnomics is all about. And just fiddling around on the edges of the tax code isn't going to get us there.

So, I think we press on with a Republican bill, while all the time listening to Democrats if they have ideas of how to go bigger or go better.

CAVUTO: Do you think the rich should get a tax cut?

MULVANEY: I think we should do whatever it takes to get 3 percent growth.

Part of that means I have to have productivity to grow up. The two primary factors in economic growth, GDP growth, would be population growth plus productivity.

So, again, what is MAGAnomics all about? Looking at everything through the prism of how do we get to 3 percent growth. And that's how we will look at any tax reform proposals.

CAVUTO: Well, that area of growth is concentrated among the very wealthy. They would get you the bang for that buck, right?

MULVANEY: I need productivity growth. I need everybody to be more productive.

We need folks to come back to work. That's why welfare is part of MAGAnomics. Welfare reform is, getting rid, as I said before, about ObamaCare and getting rid of that...

MULVANEY: I want as much as we can possibly get out of the House and the Senate.

So, I think the proposal that we have put forward is still on the table about the 15 percent corporate cuts of corporate rates, the...

CAVUTO: Yes, you mentioned the 15 percent, by the way.

Is there a point at which you say, no, no, no, our minimum is this?

MULVANEY: I think it's a negotiation.

MULVANEY: So, it's just part of the negotiation.

But let me ask you a little bit. With your recent budget and the ideas that you have that Nancy Pelosi has come down on you pretty hard and fast, that you know what it does, referring to the Republican budget. It requires more military might. It takes us down the wrong path.

MULVANEY: Yes. I -- you know, how do I react to Mrs. Pelosi? It's sort of a never-ending list of things I could say.

The bottom line is, what do you expect? It's been a long time since the minority leader in the House had anything constructive to say about the process. And while I respect her position, I don't look to her for advice on my budget.

CAVUTO: All right, but whether it's the House budget she's railing against or your budget that she said was a nonstarter, and now the Democratic leaders up talking their own plans to revive the economy, they say it shouldn't be done helping the rich.

It's old talking points. It's not constructive. There's some really good ideas in there that I think the Democrats could focus on as a place for us to get together, for example, the commitment we make on apprenticeship training, some of the commitments we make on expanding school choice.

Why aren't we talking about the things in the budget that the Democrats might be able to support, instead of having them pull out the same speeches they have used since I have been in Washington for seven years now?

CAVUTO: All right, I will put you down as a maybe on Nancy Pelosi.

CAVUTO: Now, finally, sir, I would be remiss if I didn't mention these latest rumors going back and forth that the president is throwing out Rudy Giuliani's name as a possible attorney general.

I only mention that in the scheme of the criticism he dumped on his attorney general for the way he handled the Russia recusal thing.

But I wonder, as a loyal confidant and now as OMB director, and other Cabinet members feel that the president might not have your back?

MULVANEY: I couldn't disagree with that more, more fervently.

I unveiled a fairly aggressive budget, Neil, a couple weeks ago, a couple months ago. You saw it. You saw the heat that I took on the Hill for it, even from some of my members of my own party.

CAVUTO: But people aren't freaking out there?

MULVANEY: We don't freak out at OMB.

MULVANEY: We're the Office of Management and Budget, not the office of freaking out.

We work. We work for our paychecks. We work for a living over here and we don't get caught up in a lot of the things that the media wants us to talk about.