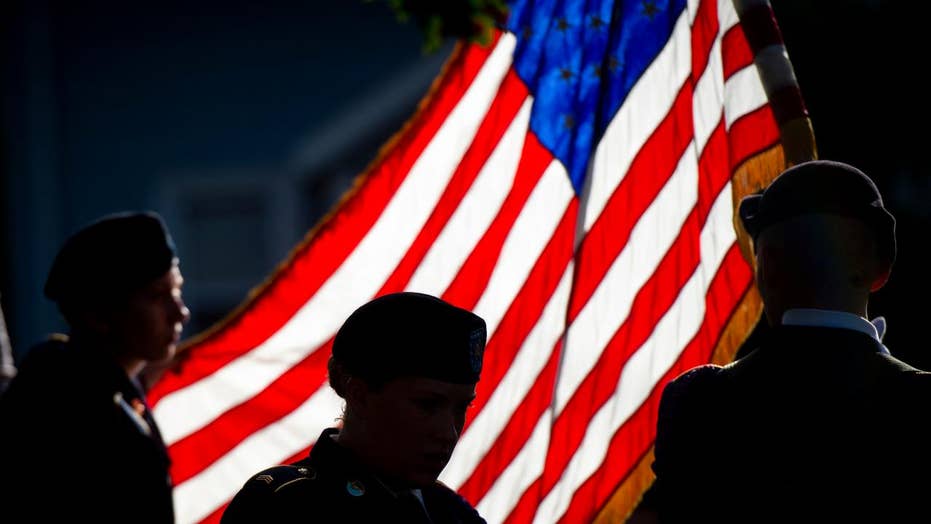 War on Terror: 17 years after the attacks of 9/11, U.S. intelligence officials see continued threat; reaction and analysis from the 'Special Report' All-Stars.

This is a rush transcript from "Special Report with Bret Baier," September 11, 2018. This copy may not be in its final form and may be updated.

PRESIDENT DONALD TRUMP: As commander-in-chief, I will always do everything in my power to prevent terrorists from striking American soil.

FBI DIRECTOR CHRISTOPHER WRAY: Today's terrorism threat still includes sleeper cells, Al Qaeda, all the kind of major terrorist organizations that you would think of. But we are also very focused now on homegrown violent extremists. We had about 120 terrorism-related arrests last year alone. That's just in the arrest context. So there's a lot happening every day, 365 days a year right now in the terrorism front.

BRET BAIER, ANCHOR: The FBI director on CBS saying that they get some 15,000 tips about terrorist-related activity every year. That's about two every day. And if you take a look at the Al Qaeda, Taliban, ISIS makeup, according to the U.N., there is an estimate out there that 30,000 members of ISIS, Islamic State, still exist in Syria and Iraq. Afghanistan officials estimate the Taliban is at about 77,000 fighters. And new estimates show Al Qaeda now has more than 20,000 fighters in Syria and Yemen and other cells in north Africa and along the Afghan-Pakistan border.

So what about the war on terror and where it stands tonight on this 17th anniversary of 9/11? Let's bring in our panel, Charles Hurt, opinion editor for The Washington Times; Charles Lane, opinion writer for The Washington Post, and Guy Benson, who is not named Charles, political editor at Townhall.com. Let's talk to the first non-Charles person. Guy, thoughts 17 years later and what we're seeing around the world on this fight?

GUY BENSON, TOWNHALL.COM: It's incredible it has been 17 years. It was a vivid day for me. It was a formative day in my life I was in high school on 9/11. And each year we get farther away, and it still feels very immediate. I remember specific details. And one of those thoughts that I had as a 16-year-old how is it possible that some terrorist organization, we know who it was, could pull off such a spectacularly horrific attack that was so well-coordinated without our government knowing about it and stopping it.

And I think to the credit of the Bush administration and subsequent administrations, that type of attack, the likelihood of it has been significantly diminished. But now as we have heard there from Director Wray, it's a new type of asymmetric attack that's virtually impossible to stop whether you have lone wolves and homegrown radicals because people who want to buy a gun and plow a car into people, that's very different than what we saw 17 years ago.

BAIER: And has the philosophy changed about you fight it over there, you don't fight it here? Has the foreign policy look on how we deal with that changed under this administration to the last?

CHARLES LANE, WASHINGTON POST: Definitely the current administration made some modifications in the war on ISIS in Iraq and Syria that some people credit with sort of relaxing or releasing, if you like, the rules of engagement so there could be more of an aggressive move against ISIS over there. So there has been that difference. But in Afghanistan, I think you see basically continuity. In slightly modified form they are following President Obama's strategy.

The big difference I see, looking back 17 years, is in the overall attitude of the U.S. public in terms of the national unity that we exhibited really pulled together on a bipartisan basis in the year after that attack. That is completely gone. And I might add that in Europe which has seen a number of spectacular and very bloody terrorist attacks, there's greater polarization and greater political division.

When you look at the big picture of the western world which was under attack from terrorism, I think you have to be worried about the divisions both within and in each society and in terms of trans-Atlantic relationship which is considerably worse, and this administration is very critical of NATO, and that could be a problem with respect to the war on terror as well.

BAIER: This administration is not, however, afraid to say "radical Islamic terrorism."

And I think one of the things that sort of gets missed about the 2016 election, something that's very popular about what Donald Trump was campaigning on was he criticized the wars. And that was -- that was a departure for either party. But, also, his talking about the wall was not just about immigration. It was about, look, there is some mad, mad people in the world who want to kill us, and these wars are very expensive. And we will bomb them when we can, but let's focus on keeping them away from us. Keep them over there so we don't have to deal with them.

And, of course, the travel ban and the laptop ban, we saw those things, which were -- this has not gotten as much press as I think it should. That was the U.S. setting a global standard about how airports screen people and screen baggage. And they have had real success and have allowed countries to get off of those lists.

BAIER: And just a couple of numbers, only six U.S. troops killed in combat in Afghanistan. Any death, obviously, is tragic for the military and those families. And 15,000 troops in Afghanistan, way down from the 100,000 under the Obama administration.

I want to turn to this next topic which is the hurricane that is coming. This is hurricane Florence. It is barreling towards North Carolina at this point and expected to cause a lot of damage right now as a hurricane category four. Here's the president today on Puerto Rico and hurricane Maria.

I actually think it was one of the best jobs that's ever been done with respect to what this is all about.

BAIER: Now, President Trump, those remarks getting a lot of attention. He is right about the electric grid in Puerto Rico. There are more than 2,900 dead according to a new study, and that number could be higher than that. Thoughts on the comments?

BENSON: There were some unique challenges in Puerto Rico, and the administration did work with partners there and also in Florida and Texas and had some successes in very difficult circumstances. When you are looking at thousands of people dying because of a natural event, no matter how well you think that you handled it, you probably shouldn't talk about how great it was.

BAIER: Hurricane response is only really as good federally as the governor who is running the show. I mean, if you look at Harvey with Texas Governor Abbott, Florida, Rick Scott, that's a different animal than President Bush dealt with Kathleen Blanco in Louisiana, and it really does come down to the state and federal hookup.

LANE: Yes. I think if the president is perceived to mishandle this hurricane, it could be real political trouble. It won't -- the buck won't stop with the governors. It will stop with him.

BAIER: As it did with Bush.

LANE: Yes. And Puerto Rico was a tragedy, and I tend to agree with Guy, it's a mistake to even appear to boast about it. But the president is lucky they don't have any congressional seats or electoral votes in Puerto Rico. North Carolina, South Carolina, and Virginia do.

BAIER: That's true. We should be concerned about the people there, but you are right, the political fallout potentially, North Carolina just redrawn, by the way, those congressional districts.

HURT: Yes. And the president is always going to defend his record on something. And I think that's what you see there. Obviously Katrina was a very unique beast in terms of how George W. Bush got blamed for that. But it is -- all these things are a tragic reminder that the federal government isn't the answer to every problem that comes along. And you have got to be prepared and you've got to get out of way of these things when it's clear that something monstrous is coming ashore.

BAIER: If you live in North Carolina beaches, listen to Charlie Hurt.