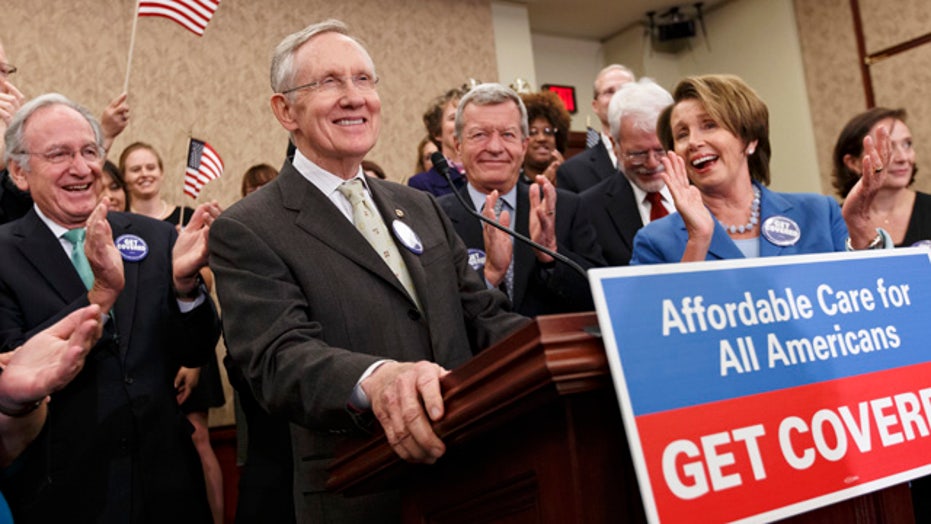 Affordable Care Act back in focus after budget stalemate ends

In Focus: Is ObamaCare the 'loser' of DC's debt drama?

JOHN TAMNY: It's a big loser because it will be implemented. Make no mistake this is the Obama's administration Vietnam for being the adolescent approach for health care. Obama at the end of the administration will wish Ted Cruz and the republicans had succeeded to defund it because they would have said Obama and the foolish legislation from themselves.

RICK UNGAR: It's the first week. What can I tell you? I expect we'll see a headline graphic coming up showing that in Oregon 10 percent, the amount of people who are uninsured in Oregon was reduced by 10 percent last week. A big number. California, 600,000 people now getting health coverage that didn't have it before. There are some victories in the states. The launch of the federal website, a disaster. You know what? It will get fixed.

STEVE FORBES: This thing is so complex. It's not glitches, David. This is beyond repair. ObamaCare short-term won politically but that is like saying the titanic won politically. It will still sink at the end of the day. That's why we are seeing rises in Walgreens, private exchange that work. State exchanges do better than the federal that gets to the point. Why is the federal government in the business anyway?

MORGAN BRENNAN: Not just yet. It doesn't matt every because it's not private business. This is the government. At the end of the day I think ObamaCare is the winner. Love it, hate it, all problems with the exchanges, it doesn't matter. We saw a standoff over ObamaCare. We see the G.O.P's Poll ratings in the toilet. We saw billions spent on a government shutdown, biting in to the economic growth. At the end of the day, what did we get for that? We got slightly tightened income verification, where consumer applying on the exchange. ObamaCare is here to stay.

MIKE OZANIAN: I think with all due respect, I think y'all are missing the main point of why President Obama is behind this health care. This has nothing to do with improving the quality of health care. It has nothing to do with insuring the uninsured. If we wanted to do that, we could have done it for a fraction of the $1.1 Trillion it will cost over the next decade. The purpose of this is income redistribution, wealth redistribution. That is what ObamaCare is doing.

China mocks U.S. during DC's showdown. But does China need us more than we need them?

RICH KARLGAARD: China does need us more than we need them. They are an export driven economy. They have been growing at nearly 10 percent a year for the last 20 years. Now they are slowing to about 7 percent. They are terrified of the internal revolution. 75 percent of the Chinese population has not really benefited from the 30-year miracle in China. And so, things are very intense internally. That was said for internal consumption in China.

RICK UNGAR: First, I have to give a shout out for the producers for finding that commercial. That thing was awesome. I don't know where you found that. Look, the reality is if you think that it's only China that is making fun of us after the past few weeks, you're dreaming. Every country out there is mocking us for what the Republicans put us through. Do we need China? Of course we need china and of course China needs us. To try and measure this like who needs each other worse, how silly is that?

JOHN TAMNY: We are and it's easy to say because China is the poorer country they get more from us than we do from them. That is the beauty of free trade. Both sides benefit. The Chinese have the huge export market to sell to. But for Americans, every day the Chinese get up and go to work, Americans get a raise and a lifestyle enhancement. So yes, it's great for China, but China is embrace of free markets is one of the greatest things that happened to the American economy in modern times.

STEVE FORBES: China has 44 million small business, most operate in the twilight zone. Only now are they allowing licenses to deal with the 44 million new businesses, small businesses. They've also got to bring in a commercial system and allow more property rights. So yes, china is on the right path but they have to do more if they want to be a great economic innovative power.

MIKE OZANIAN: I get what you are saying, David. But by the same token if they were hoping for to us do bad or if we did do bad economically, then their bond investors would be hurt. I don't think it's in their interest-- The president has given them an opportunity to. You have to remember, President Obama has set this country back many years by his weak leadership. Remember, I thought really the point was when he was looking for support to bomb Syria. He got no support. The British turned him down; Arab league turned him down, U.N. gave him a slap across the face. He had to go on his hands and knees begging Putin to bail him out. That showed in terms of a global power how far we have all within the president.

MORGAN BRENNAN: I think at the end of the day China still at this point in time needs the U.S. needs the U.S. More than U.S. needs China. I can be summed up by George Soros, Wall Street's favorite billionaire liberal when he said the dollar is the weakest currency except for all others. That is the point. More than 60 percent estimated 60 percent of Chinese reserves are sunk in dollars denominated debt. At the end of day, despite the fiscal foibles it's the safest most liquid asset is the U.S. treasuries. We're even seeing it with the individual Chinese consumers coming in and plowing their money in to the luxury real estate.

STEVE FORBES: 85 percent of the study over the minimum wage found it's a job-killer, not a job-creator. Most people making minimum wage are not living in poverty. They have the average family income of $53,000 a year. Most people who start with the minimum wage within a year get bumped up because they are getting more skills. The real razor of minimum wage is a prosperous economy. We know how we get that. It's not what this administration is doing.

MORGAN BRENNAN: No. Steve makes a great point in terms of a strong economy. But when you look at where the minimum wage came from, it came as a reaction to the Great Depression. We do not have a strong economy, we have stagnant wages across the board and we have consumers' undying devotion to dollar menus, which pinch profits. Until you look at ObamaCare, high taxes, the situations that fast food franchises deal with on a daily basis you won't see the workers' wages rise.

JOHN TAMNY: If you want higher wages you have to have low wages first. The problem with a minimum wage it's a barrier for those without work experience getting in the workforce. Get rid of it. People can get the experience on the way to higher wages.

RICK UNGAR: No, you don't want them to stay there. But be realistic here. When I was in high school I worked in a fast food restaurant. I didn't have to support a family. It wasn't that important what I make. I used to be in those days it was people like me getting those jobs. Today, it's a very different picture. You have people who are much older, who have families, working in these fast food places. You cannot have them working full-time and then have them living under the poverty line.

RICH KARLGAARD: It doesn't help at all. Here is the thing that Rick and Morgan forget that is you can't force an employer to hire somebody. So if the wage goes up, there will be fewer dollars left to hire people. People might be paid higher but unemployment will go through the roof.