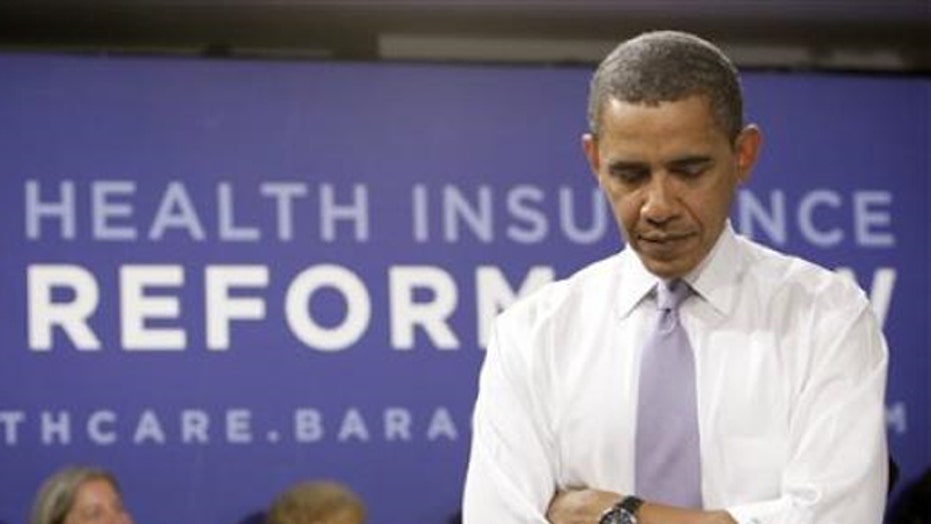 Can taxpayers thank their lucky stars?

KIMBERLY GUILFOYLE: This was a means to an end because ultimately they wanted to push everybody out of their policies that they promised you could keep. You like your insurance, you can keep it, lie. They want to force you into a situation where everybody is going to have this government-run health care.

JUAN WILLIAMS: I must say that if you are at the moment in the House of Representatives and one of these Tea Party people who are so down on ObamaCare, I think that's where you're driving the whole conversation because they don't have any reasonable alternative so they are pushing America towards a single payer system.

JONATHAN HOEING: It's not in the back of their mind. We talked about it on this show in 2008. The president's open goal was single payer health care or at the very least, government control of health care. The president has done it on the basis of a fallacy, arguing that we had this free market in health care before the ACA but those evil greedy capitalists ruined it all so we need government control. The result will have to be single payer or, at the very least, fascism which is privately owned health care to one that is completely controlled by government which is exactly what we have right now.

MICHELLE FIELDS: Up to 80 percent of the 14 million people who have individual plans are going to get cancelation notices. Obama knew this as early as 2010. A lot of people are saying that ObamaCare is sort of the DMV of Cyberspace. I think ObamaCare is far worse. Democrats know that. And that's why we're going to start seeing them say, oh, the reason why it doesn't work is because we need to simplify it and have the government take over everything. That is the path of where they're going right now.

WAYNE ROGERS: You have a law here that's over 2200 pages long. The congress didn't read it. They didn't understand it. The people don't understand it. There's no way for them to explain it. This is a giant plot. This is a way to substitute down government intrusion for freedom of choice. In other words, they want equality as opposed to freedom. Equality and freedom are incompatible in certain ways and you just can't have equality across the board and have freedom. The people have a right to choose what they want have for their health care program and have no choice in the matter because the government is going to enforce it. The congress and government officials are going to exempt themselves.

MAINSTREAM MEDIA GETS TOUGH ON OBAMACARE: WHAT IT MEANS FOR YOU

JONATHAN HOEING: The mainstream media just like the culture unfortunately is pragmatic and that's actually a bad thing. They're unable to think in principles. They can't distinguish between right and wrong. They're not fighting really on the basis here which is that socialized medicine and ObamaCare is fundamentally wrong. It's morally wrong. No one's need is a claim on your life. And until they wake up to that, I fear we're going to keep going in exactly the wrong direction.

WAYNE ROGERS: They think that the government is better equipped to make a choice for you than you are for yourself. The same thing is true of the 18th amendment, by the way, and the congress passed that and everything else. And then we had to turn around and reverse it with a 21st amendment. So this is not poured in concrete and these people are absolutely wrong and cannot recognize it.

MICHELLE FIELDS: They don't see Obama as a president; they see him as a potential future employer. There have been at least 24 journalists who have left the profession to join the administration. What they should have been doing is fact checking a lot of Obama's absurd claims about ObamaCare.

JUAN WILLIAMS: I don't think they are dropping the ball. I think right now they are paying attention to the failure of the computer rollout. What's striking to me is that people forgot that mainstream media has been paying attention to the status quo which is bankrupting families, bankrupting corporations and they want the mainstream media to serve their agenda and somehow how defeat ObamaCare. We should want to take care of all the inadequately uninsured people in this country.

KIMBERLY GUILFOYLE: I don't know anybody lamer than the mainstream media. It's not unreasonable to ask them to do their job in a democracy to report the news. They have no choice but the actually report the facts. They're doing an abysmal job. They should be doing a better job.

GLEN GREENWALD: I think he was informed but chose to tell the public things that he knew to be false. This has really been the nub of the story from the beginning. The top NSA officials lied to the congress about what the NSA does with regards to American communication and president Obama repeatedly misled the public. The NSA is frequently monitoring the communication of American citizens. That is a major part of the scandal and article after article has proven that.

WYANE ROGERS: (ACHC) A HEALTHY CHOICE EVEN WITH OUR HEALTHCARE SYSTEM IN CHAOS.

JONATHAN HOEING: LOOK UP NORTH FOR INSURANCE: HEAD TO CANADA AND BUY (MFC)