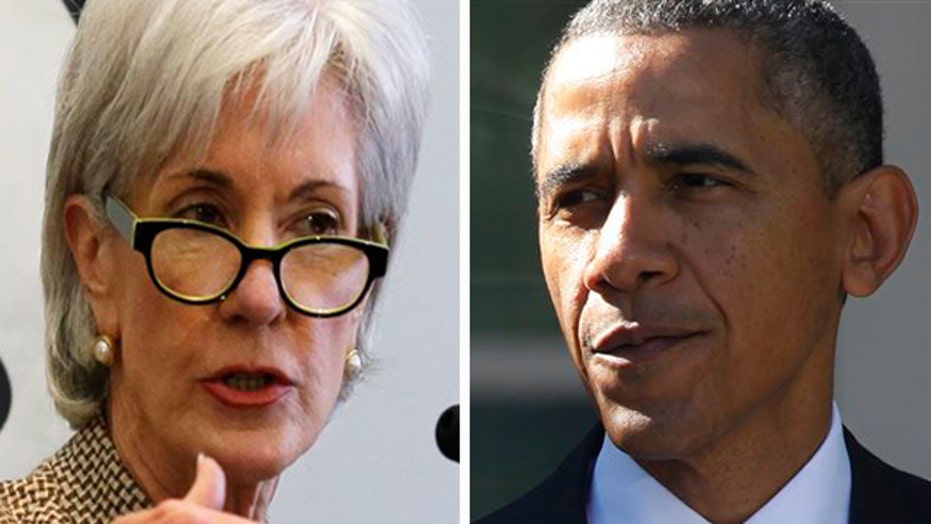 Is the HHS Secretary trying to cover for the president?

This is a rush transcript from "Hannity," October 23, 2013. This copy may not be in its final form and may be updated.

SEAN HANNITY, HOST: There's a new report that one Florida company now is canceling -- get this -- over 300,000 policies. Now, according to Kaiser Health News, quote, "Health plans are sending hundreds of thousands of cancellation letters to people who buy their own coverage, frustrating some consumers who want to keep what they have and forcing others to buy more costly policies."

Austan, the president said you could keep your own plan. I want you to look into the eyes of all of our Florida viewers tonight and tell them why they can't keep their own plan.

HANNITY: Well, wait a second, what? How about answering the question?

GOOLSBEE: You didn't put the dates. Your -- that was a request, not a question. The -- you're taking quotes from day -- before the Republicans changed the plan. So you need to be a little fair. In many of these...

GOOLSBEE: ... cases where you're talking about the cancellation...

HANNITY: Republicans didn't vote for it! They didn't change anything in the plan! What are you -- you're going to blame this on Bush now?

Now, in many of the cases in which people are saying they dropped the plan, they're being offered plans that give better coverage...

HANNITY: The president said, if you like your plan, you can keep it. And by the way, he also said the average family...

GOOLSBEE: If they give you a better plan for less money, why are you complaining about it?

HANNITY: Well, you're saying less money, but I'm putting up on the screen -- they did an analysis at Heritage and at Forbes and all these other -- 45 out of 50 states are seeing premium increases.

GOOLSBEE: At the slowest rate...

HANNITY: No! The average male is 99 percent increase in premium, average female 62 percent. He broke that promise, too!

HANNITY: It is correct! Look at the screen right below there. You can see the increases.

ARI FLEISCHER, FMR. BUSH WHITE HOUSE SPOKESMAN: Let me give you an example. My mother. My mother is an IBM retiree. She has Medicare, of course, but then she also had private insurance through IBM. They just dropped it. They've given her a lump sum, and now she has to go buy her insurance -- she's in her 80s -- and sort out through all these insurance markets and buy her insurance.

GOOLSBEE: That is not correct.

FLEISCHER: It just happened to my mother, that she was told to drop her plan because IBM did. And we're seeing it throughout the private sector, that they're changing plans and putting people either onto the exchange or giving them a lump sum and telling them to buy in the private market. Maybe that'll turn out to be the savior of all this, people buying plans in the private market. But it is not what the president promised!

HANNITY: You know something? I'm giving you facts and figures. I'm giving you Heritage numbers here. There's been -- if you haven't been reading the papers, Austan, what's happening to Ari's mother is happening all over the country. People are paying more...

HANNITY: Did the president say...

GOOLSBEE: That has nothing...

GOOLSBEE: ... to do with ObamaCare. Please.

FLEISCHER: Oh, Austan, do you think if it wasn't for ObamaCare that IBM would have dropped her? IBM did this because of ObamaCare. That's exactly why. The private sector is responding to the government now saying the government will do it for you.

GOOLSBEE: People that are already in Medicare, that is not from ObamaCare. That is not related. That is not -- it is a different program.

FLEISCHER: It's a private insurance policy on top of Medicare.

GOOLSBEE: Sean, you had people on the show who said they were dropping coverage because ObamaCare was going to increase their costs...

HANNITY: And the president had 13 people...

GOOLSBEE: ... and then they got fact-checked...

HANNITY: Wait a minute! And the president had 13 people...

GOOLSBEE: ... and it wasn't accurate!

HANNITY: ... behind him that -- touting ObamaCare, and three were signed up!

FLEISCHER: And if it wasn't for ObamaCare, IBM would still be offering these plans to their retirees. It was one of the great private sector innovations...

GOOLSBEE: The fact is that health care costs...

FLEISCHER: ... in America that they got insurance on top of Medicare because Medicare doesn't pay for everything.

HANNITY: All right, I want to go through this slowly. So the president said, Ari, that people can keep their plan, 300,000 Floridians, your mother, they're not the keeping their plan. President said this would be $900 billion. Latest estimates are three times that amount. President said to save the average person -- family would save $2,500. According to Forbes, there is an increase of $7,500, a $10,000 swing.

FLEISCHER: It would bring the health curve down, he said.

FLEISCHER: We haven't seen evidence of that. But the fundamental, biggest issue that remains is whether we're going to have what's called adverse selection, which is that the only people who really do take the trouble to sign up now are those who need it the most, the sickest among us, and that young and healthy people who we need to have contributed to an insurance pool will not. That's why this so-called quirk is such -- the kink now is such a bad problem.

FLEISCHER: The only people remaining who get it are those who need it the most -- which is a good thing. We want people to get it. But if the price is that insurance premiums skyrocket for the rest of us, it's a death spiral and health care is broken.

HANNITY: You know -- you know, Austan, we're friends. I -- you're a good guy. I like meeting with you, like talking to you. And I like our little bets that we have. But I got to tell you something...

GOOLSBEE: You still owe me dinner.

HANNITY: I gave you a dinner card to Ruth's Chris Steakhouse.

GOOLSBEE: You're trying to spend your way out of it, and that won't work!

But here's the point. All of this evidence is out there, and you're just in a state of denial. You're looking...

GOOLSBEE: I'm not in a state of denial.

HANNITY: You're in a state of utter...

GOOLSBEE: I tried to ahead of time say, look, what facts would come out that would make you decide that what you were saying was not true? But you refused to acknowledge those. So if I showed you that health care costs have risen slower in the last two years than at any two-year period...

HANNITY: You're living in an alternate universe!

GOOLSBEE: ... in the last 50 years, would that be a piece of evidence?

GOOLSBEE: But you don't accept that piece.

FLEISCHER: Austan, I have a question for you.

FLEISCHER: You were on the inside, so you know the dynamics of how the Obama operation works. Why wouldn't the president have been told ahead of time about all the problems before it launched? Why would the secretary of HHS say that?

GOOLSBEE: I don't totally know. I couldn't tell from that interview what she was describing. I would think that they would go through -- the president wouldn't be doing beta testing, obviously, of the program, but would be apprised...

GOOLSBEE: ... this stuff that was going on.

HANNITY: I have a follow-up to that.

GOOLSBEE: So I don't know. That was the only 10-second reference to that, so I'm not sure.

HANNITY: You're an economics guy. Can you name any private company that having three years to prepare for this launch of a website and $634 million -- would the person responsible for that launch be fired in the private sector?

GOOLSBEE: Look, I know that if a band was so popular that demand for its tickets shut down Ticketmaster's website, that would not be a sign that the band is no good.

HANNITY: Would the -- would the person be fired for this rollout, in this case? It's not a band.

GOOLSBEE: Look, they brought in somebody to focus to try to get the website working. The program itself -- that is not...

HANNITY: So you don't think Kathleen Sebelius should be fired?

GOOLSBEE: Obviously, that's not my decision to make.

HANNITY: I didn't as you if it was your decision. I asked if you thought she was incompetent and should be fired.

GOOLSBEE: I would need to look at what all the facts are. Obviously, that's the way managers should do it.

FLEISCHER: Secretary Sebelius is about the only person left in America with job security.

All right. And by the way, they fired a guy at the White House who tweeted that Valerie Jarrett was an airhead. That's a fireable offense, but not wasting $634 million taxpayer dollars.

All right, Austan, God bless you. Enjoy the steak.