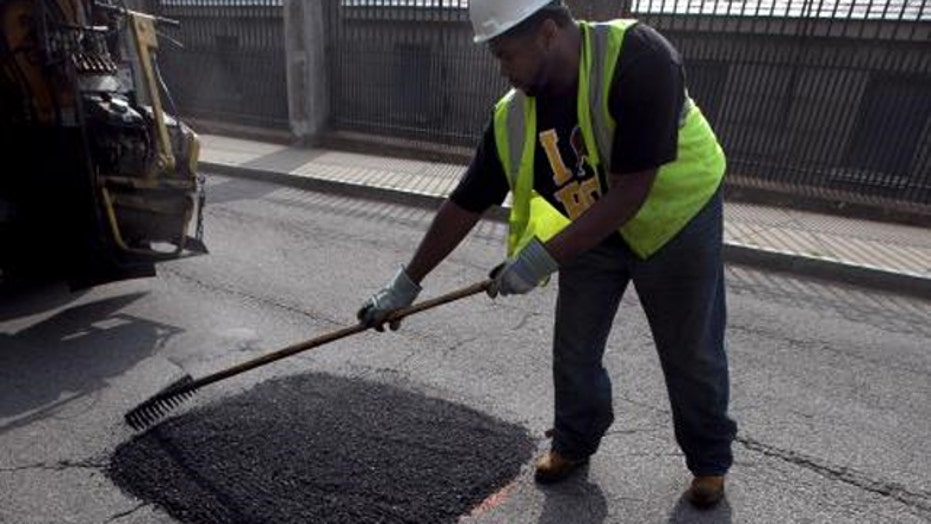 Obama pushes for $300 billion in spending on roads, railways

Does America need new round of stimulus?

PRESIDENT OBAMA: STIMULUS ACTUALLY WORKED DESPITE WHAT EVERYBODY CLAIMS

CHARLES PAYNE: But the reality is, is that it's really nuts. I wonder sometimes if the president is just delirious. He's throwing these numbers out there, these game plans out there.

We had an infrastructure project, it was a grab for money. It did nothing for local communities. It did nothing for the great of the country. Spain had a program like this that was outrageous. They built the second longest high-speed rail in the world, brand new highways, 42 airports. They're the brokest western European country in the world now. It doesn't work. It might buy votes, but it hurts the country in the long run.

DAGEN MCDOWELL: I think that if you're going to pay for this, and it feels like every speech that the president has given since he was inaugurated in 2009, he has mentioned infrastructure spending. But if you are going to pay for it, do it with some honesty. Because half of this $300 billion he is proposing is coming from reforming the corporate tax code. If you want to fill the highway trust fund, you have to raise taxes on gasoline period. And he won't talk about it. Democrats won't talk about it. Nobody will. That is the only truly honest way to pay for fixing the road.

CHARLIE GASPARINO: Not only that, he should just explain it. $300 billion, we are talking billion. I thought I saw million for a second. But, even that's not enough. Do you realize that? You can spend $800 billion, and that's not going to jump start the economy in a meaningful way when the government starts to direct the projects. The best way is give businesses assurance they won't be taxed to death, that they can hire people and they won't get crushed on regulation. That's the only thing you can do. $800 Billion stimulus package was needed. What wasn't needed was the government directing the winners and the losers.

ADAM LASHINSKY: Well, I think you put your finger on it, Neil. I thought that opening video was meant to show crumbling infrastructure, not a runaway train. That is the problem. You assume, you feel like the administration is not, the government doesn't say how the government money is being spent.

CHARLES PAYNE: Can you imagine that? The nutritional facts. OK, facts: We got social spending out of this world, give it a 90 percent daily value. What about cholesterol? ObamaCare, it's clogging up the economic arteries of this country. Put 120 percent for values. Yeah, it would be great if Washington could label itself. This is OK for the first lady to go out and say we should eat better. It will cost the food industry $2 billion. The labels work the same.

DAGEN MCDOWELL: The biggest change is portion size because the labels we use

now are based on the way we ate in the '70s and ''80s. And we eat a lot more now. They are changes the portion sizes on labels. By the way, the government is not telling you what to eat. You are not picking up a pint of ice cream.

ADAM LASHINSKY: Look, I think it's a, you know, you are going to think -- this is overly simplistic. You are either for progress or against progress, to me this is progress. Where you see the nanny state, I see giving consumers or I should say, requiring food manufacturers to give consumers better information so they can make intelligent decisions.

CHARLIE GASPARINO: At some point it's common sense. I don't care how much good fat or bad fat is in potato chips. They're fried, you know they're bad. That's one of the things about Michelle Obama. She does talk about people using their common sense and eating less processed food. If you go by these labels...

CHARLES PAYNE: Well, there is a gigantic double standard, but it was like manna from heaven when that Toyota thing came out. Remember Ray Lahood? He was there saying, 'Don't mess with the Toyotas. Whatever you do, don't buy a Toyota, you know. Government motors making a good car.' It is screaming hypocrisy. It makes people more bitter about the bailout and things like that.

DAGEN MCDOWELL: The National Highway Traffic Administration is investigating the timing of the recall announcement. Because there are deaths involved, I will put money on it that there will be hearings in front of Congress. Now, there hasn't been the outrage and the kind of reaction you saw after Toyota, yes, I think it is a double standard. I think there is more to this.

CHARLIE GASPARINO: I used to own a Saturn Ion. That was on the list. You know, it reminds me of the case at Standards & Poors is making on the downgrade. It basically said it's being fingered and attacked because it is a -- you know, downgraded the U.S. Seems like these guys play really rough. It is more evidence that that is the way this administration -- listen, go after Standard & Poors, you don't go after Salinger. You go after Toyota, you don't go after GM because there are government motives.