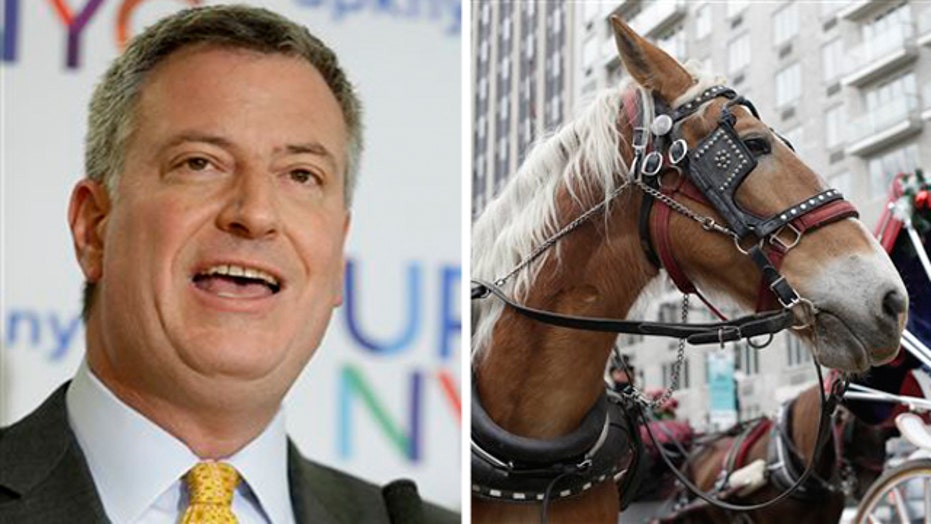 This is a rush transcript from "Hannity," January 10, 2014. This copy may not be in its final form and may be updated.

AINSLEY EARHARDT, "FOX &FRIENDS FIRST" CO-HOST: These horse-drawn carriage rides have been a tradition here in New York City since the 1850s. Hundreds of employees have jobs because of these horses, and thousands of people who visit this city every year enjoy the rides through Central Park. But if it's up to the mayor, real estate developers and animal activists, this operation will be shut down.

(voice-over): Why, after more than 150 years, would this tourist tradition be going away? Well, New York City has a new mayor, and his mind seems pretty made up.

MAYOR BILL DE BLASIO, D-NEW YORK CITY: Let's get it right. We are going to get rid of the horse carriages, period. They're not humane. They're not appropriate to the year 2014. It's over.

EARHARDT: The mayor sides with NYClass, a group that says it's animal cruelty and has been lobbying for a ban since 2008.

ALLIE FELDMAN, NYCLASS LEAD ORGANIZER: We feel it's inherently cruel to be forcing an animal to work in mid-town traffic. It would be one thing if you had the horses working out in the countryside.

CRISTINA HANSEN, SAVENYCHORSECARRIAGES.COM: These horses are some of the most regulated, well cared-for horses on the planet. We are constantly in the public. We're constantly -- there's more licenses and inspections involved here than day cares, which most other horses out in the country or in other cities don't get. They have mandatory vacation. They go to the farm at least five weeks out of the year.

EARHARDT: The carriage drivers say that NYClass was co-founded by real estate developers who really have their eyes on the stables and the potential highrises that could replace them.

UNIDENTIFIED MALE: The truth is, you know, we have some of the best cared- for horses in the country here. So it's not really about the horses. It's about the real estate and the fact that we have four stables on the West Side, which are in prime locations that probably developers would love to get their hands on.

EARHARDT: It's an uphill battle.

HANSEN: They've spent a lot of money on high-powered PR firms and high-powered lobbyists to get their message out to the city council, even if it's wrong. And we're -- we -- you know, we're just working-class people. I mean, this is it. This is the PR department here.

UNIDENTIFIED MALE: There's no secret to us out here. We all know how he got into office and the people that provided the money for his campaign.

HANSEN: This would just be disastrous for all of us, including the horses. A lot of people that I work with, for many of them, this is the only job they've ever had. A lot of people don't know what they would do.

EARHARDT: The carriage opponents say that the drivers can switch from horse-drawn carriages to these, electric replicas of vintage cars.

FELDMAN: It's clean, it's economical, it's safe. And most of all, it's humane. It doesn't poop. It doesn't foam at the mouth. It doesn't urinate on city streets.

EARHARDT: So far, the tourists don't seem to be buying it.

UNIDENTIFIED MALE: I don't think these car things will ever take off. I reckon the horses are here to stay, to be quite honest.

EARHARDT: And the drivers are not giving up.

UNIDENTIFIED MALE: If you're going to put us out of business, you have to come up with a pretty good reason. If you say that the industry is inhumane and that these horses are being abused, prove it.

HANNITY: All right, Ainsley, I have a friend of mine. He is a policeman. He rides a horse for the city. His horse, just like these horses, very highly regulated. They have dental care. They have great facilities where they live. They're fed the best food. They are offered the best veterinary care. Isn't that the same with -- in this case?

EARHARDT: Yes. Cristina with Savenychorsecarriages.com -- she was telling us -- she's the lady you saw in the piece wearing a hat. She was a wealth of information. And she said it's interesting that they're targeting our horses but not the horses that the police officers are riding on. What's the difference? And she said, our horses are treated the exact same way, and we're all regulated under seven different agencies. That's the ASPCA. That's...

HANNITY: They're all over them!

LIZ PLANK, POLICYMC SOCIAL EDITOR: Yes, I mean, we can all agree it is an iconic practice and it's really a shame that tourists won't be able to write these words. I agree with you, but I don't think this is good for the horses. Horses were not built to ride on asphalt.

HANNITY: Actually, horses were built to be ridden on.

PLANK: You can't find that in nature. They're meant to ride with vegetation, not have ambulances and be in the middle of traffic in New York City.

HANNITY: Do you want to make it illegal to eat a cow?

HANNITY: No, eat a cow. Listen, I would rather be a horse ridden than a cow eaten.

PLANK: Right, but I think that there is a purpose in eating the cow --

HANNITY: Well, there is a purpose in riding the horse, too, for transportation.

PLANK: I think it is clear we should move to electric, because that makes much more sense.

HANNITY: How about you move --

TONY SAYEGH, FOX NEWS CONTRIBUTOR: If you are going to make the argument this is inhumane to the horses, let's focus on that question, what happens to these horses? Are they put out to pasture or are we going to create horse country clubs? No, they will be slaughtered and killed. Much less humane?

SAYEGH: The other aspect, this is the clearest case of crony capitalism, it is nice to know our radical progressive mayor believes in capitalism for his friends. The person who is lobbying for this the hardest is a mega De Blasio donor.

SAYEGH: Formerly the head of Edison Properties, who is trying to procure this stable once it comes onto the market. So the only way to get it into the market is ending the practice.

EARHARDT: There are three stables on the West Side, prime property, they overlook the Hudson, overlook the water. They could build this huge high rise.

EARHARDT: That is what the horse supporters are saying.

HANNITY: Does this sound like a good thing to you?

PLANK: That doesn't right, because if we look at actually who is running on this issue. It is a bipartisan issue, so the Republican candidate who ran for mayor also ran on this ticket.

HANNITY: Do you eat meat?

HANNITY: Do you eat fish?

HANNITY: Do you wear leather?

HANNITY: So when you will get leather shoes, remember this is a dead animal. These horses like to do this.

PLANK: I'm not sure they do and I'm really glad we all brought up the issue the economy because this is actually putting more money into the economy.

PLANK: Now that they're electronically driven. These carriages will be --

HANNITY: Nobody will go in an electronic car.

PLANK: I would do it. Now they can ride all year long, because before because of the weather --

SAYEGH: You would pay $130 an hour to ride in an electric golf cart basically around Central Park.

EARHARDT: If you really think that the horses are treated so poorly, prove it. I went to the stables, they were beautiful. The horses, they rotate them and send them on vacation.

HANNITY: They get more vacation than I do.

HANNITY: They get dental care, more than I get.

All right, we got to go. And thank you all for being with us.