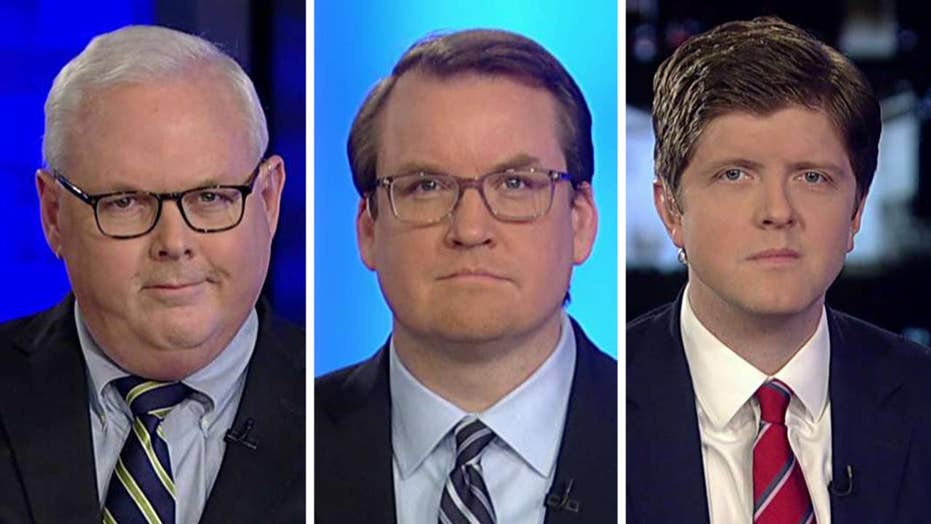 This is a rush transcript from "Special Report with Bret Baier," January 31, 2018. This copy may not be in its final form and may be updated.

JOHN KELLY, WHITE HOUSE CHIEF OF STAFF: Our national security lawyers in the White House they work for me, work for the president, they are slicing and dicing it, looking at it so that we know what it means, what it --

BRIAN KILMEADE, FOX NEWS: Did you see it?

KELLY: He wants everything out so the American people can make up their own minds. And if there's people being held accountable, then so be it. It will be released here pretty quick I think and the whole world can see it.

SEN. RICHARD BLUMENTHAL, D-CONN.: Nothing is so repugnant and frightening as the Republicans all-out assault on law enforcement and particularly our FBI.

BRET BAIER, ANCHOR: There really hasn't been this much coverage of the memo no one has seen publicly, I don't think ever. This memo is likely coming out but the FBI pushing back, releasing a statement saying "The FBI takes seriously its obligations to the FISA court, its compliance with procedures overseen by career professionals in the Department of Justice and the FBI. We are committed to working with the appropriate oversight entities to ensure the continuing integrity of the FISA process. With the guard to the House Intelligence Committee's memorandum, the FBI was provided a limited opportunity to review this memo on the day before the committee voted to release it. As expressed during our initial review, we have grave concerns about material omissions of fact that fundamentally impact the memo's accuracy."

To which the House Intel Chair, Devin Nunes, responded with this statement, "The memo contains all the relevant facts on FISA abuse. After fighting our demands for these documents for months, the FBI and DOJ now seem to be going through a series of increasingly ridiculous, increasingly desperate excuses to avoid transparency."

So where are we on all this and what does that mean? Let's bring in our panel: Former CIA analyst and nationally syndicated radio host Buck Sexton; Philip Bump, politics reporter for The Washington Post, and Bill McGurn, mainstream columnist for the Wall Street Journal. OK, Buck, the arguments. The FBI clearly laying down a marker here, saying this is what they feel, Chris Wray and others.

BUCK SEXTON, SYNDICATED RADIO HOST: Large federal bureaucracies are always going to spend at least some of their energy and time defending themselves, especially in circumstances where there could be something embarrassing that comes out. Now, as you pointed out, we haven't seen the memo yet so we are doing a lot of debating of something that we don't have the full facts on.

But I would just note that at this point what is really the other option? Are we just going to pretend that this hasn't happened, this national discussion isn't ongoing and we are not going to see what's in the memo? If someone wants to talk about undermining faith in institutions it would seem to me that withdrawing Congress' ability and obligation to do oversight here and then hoping that this just goes away is the worst of all options. The better option is for her to come out. Democrats can respond, the FBI can add the contacts they think is necessary, and the American people can finally know there is a presidency at stake here.

BAIER: Speaker Ryan seem to indicate that the Democratic version of the memo is going to go through the same process and likely will come out as well, having the members see it first. Dianne Feinstein, Senator Feinstein says "It's clear the goal is to undermine the special counsel's investigation. If transparency where the objective, Republicans would support releasing the Democratic memo simultaneously but instead they are blocking it. There's no excuse for playing politics with the highly classified information. The president shouldn't place personal or partisan interests above our national security." I think I explained the series of events as the speaker describes them going through this process.

PHILIP BUMP, WASHINGTON POST: I think that the question that overhangs all of this is the question of urgency. What is the urgency at play here? Why is it that the memo, to the point that Buck just made, yes, if you release the memo, then the information is out there. This is the argument that the chief of staff John Kelly made this morning.

But the FBI has expressed concerns about the contents of the memo repeatedly on more than one occasion. Even today the Department of Justice, Rod Rosenstein, the deputy attorney general, indicated that he shared those concerns that the FBI had.

And the question I think, the broader question here is and the question I think is reinforced by what Senator Feinstein said is why isn't the case that there is no unified document that comes out potentially from the Republicans and the Democrats articulating what concerns there may be with the FISA process and have that be the thing that is presented to the public instead of what is admittedly I think on all sides the work product of the Republicans on the House Intelligence Committee.

WILLIAM MCGURN, WALL STREET JOURNAL: I think the FBI's argument is ridiculous. For one thing they have shifted the argument. They used to say it was sources and methods. Now they are saying basically it would be material embarrassing to us. This is the Colonel Jessup argument from "A Few Good Men." The American people can't handle the truth. I think people need to see.

We have two big questions over all this -- did Donald Trump collude with the Russians to steal the election in 2016, and did the FBI and DOJ put their fingers on the scale? Now, remember this is also, Christopher Wray in his testimony for confirmation spoke about how he couldn't give Congress information because it was classified. This gets this backwards. The FBI is accountable to we the people through the Congress, not the other way around.

BAIER: Buck, it seems like it's coming to a head. We are hearing it could be tomorrow that this all moves forward. The president indicated as he was walking out of the state of union address, 100 percent it's coming out. What do you think the fallout will be if the FBI objections -- if it really does make the FBI and the DOJ look as bad as some Republican lawmakers suggest it does?

SEXTON: I think that gets us into a critical distinction that the White House and others have been trying to make for a while now, which is that there is no war on the FBI. There is no effort to undermine wholesale the Department of Justice and all that it does. This is about the actions of a few individuals that were in very senior levels at both those institutions and bringing them to light so that there can be accountability. There has to be.

The point that was just made, Congress has oversight here. These are not a separate and independent branch of government. And so that's why I think the transparency issue here doesn't seem to me to be a worthwhile counterargument. I'm not seeing it, especially given that they are saying we need our own memo to come out. Is it that it was classified or is it that you want your own say?

BAIER: Trying to separate it, though, from the special counsel's investigation seems a little tough. The speaker tried to walk that line yesterday. It's all interconnected here, isn't it?

BUMP: Exactly. But that said, it is clear that one of the concerns that has been raised about this memo is the extent to which the White House in particular is enthusiastic about its release because it will cast doubt upon the entire process that President Trump is facing. That is clearly an aspect to it. And so I think that Speaker Ryan was trying to be deliberate in saying this is something separate from that to try and erase that sense that may be out there.

All of that said, I think -- we are being asked essentially by politicians to trust that they are the objective actors here whereas the trained FBI officials who are trained to act objectively are the ones that are acting on a partisan basis. I think that's a tough sell for a lot of the American public.

BAIER: The only problem is it changed with these text messages. And when the text messages came out it painted a different picture.

MCGURN: I would rather hear people concerned not about urgency but about truth. And there are serious questions raised about the FBI. If the FBI misrepresented information in a FISA court, the premier law enforcement agency in the world, that is a big deal because if they change their 302 forms, which are the interview forms, that is a big deal that gets to the heart of government. To me it's worse than if a politician is corrupt. If a politician is corrupt, it's one thing. If these objective institutions - - I just find it so strange that never have so many thoughts hard to prevent so much information from coming out. It seems to me that all the arguments, whether it's lack of context or that it was put together -- I want to know whether it was true. And if it requires more information, yes, the answer to me, I want to see the Democratic memo, I want to see the I.G. report. I want to see it out.

And remember, this is an FBI that has fought giving this information, and the only reason that they acceded to it is because they were threatened -- the director was threatened with a contempt vote in Congress.

BAIER: This won't be the end of this discussion.