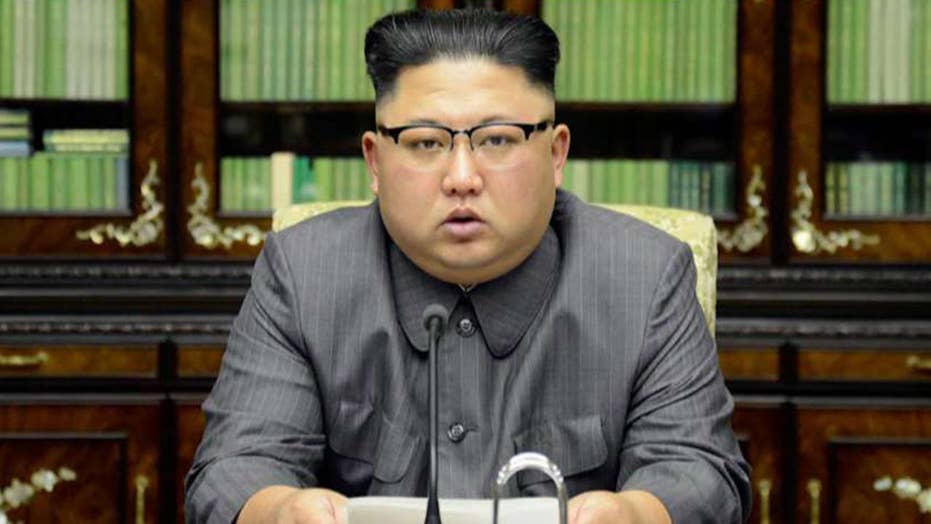 North Korea expresses willingness to resolve issues with US

North Korea says President Trump's decision to cancel the summit with Kim Jong Un is not in line with the world's wishes; reaction and analysis from the 'Special Report' All-Stars.

This is a rush transcript from "Special Report with Bret Baier," May 24, 2018. This copy may not be in its final form and may be updated.

PRESIDENT DONALD TRUMP: I have decided to terminate the planned summit in Singapore on June 12th. I believe that this is a tremendous setback for North Korea and indeed a setback for the world. Hopefully positive things will be taking place with respect to the future of North Korea. But if they don't, we are more ready then we have ever been before.

SEN. ROBERT MENENDEZ, D-N.J.: The art of diplomacy is a lot harder than the art of the deal.

HOUSE MINORITY LEADER NANCY PELOSI, D-CALIF.: I think it's good thing for Kim Jong-un. When he got this letter from this president saying, OK, never mind, he must be having a giggle fit. In this very chummy, palsy-walsy letter to Kim Jong-un, he, Kim Jong-un, is the big winner.

BRET BAIER, ANCHOR: Minority leader in the House Nancy Pelosi referencing this letter that actually was tweeted out by the president himself in which the first announcement is made that the Singapore summit is not going forward. Among the outreach, though, is a future line in here, "If you change your mind having to do with this most important summit please do not hesitate to call me or write. The world and North Korea in particular has lost a great opportunity for lasting peace and great prosperity and wealth. This missed opportunity is a truly sad moment in history."

With that, let's bring in our panel from Washington: Tom Rogan, commentary writer for the Washington Examiner; Amy Walter, national editor for the Cook Political Report, and Mollie Hemingway, senior editor at The Federalist.

Tom, your thoughts on how it all came down today.

TOM ROGAN, WASHINGTON EXAMINER: I think the basic point here is that President Trump is leaving clearly an opening towards continuing this summit on June 12th as had previously been arranged. And I think actually in my impression that is what will happen. What I think you see coming behind the scenes here is a pressure calculation on the part of the Chinese to see how far they can push President Trump. I think the cancellation was directed at Beijing as much as it was at Pyongyang. But also on the secondary part, Kim Jong-un recognizes the symbolism of his attending of the summit is as complicated as some of the concessions that he might be expected to make. But I still think ultimately this summit will go ahead on June 12th.

BAIER: To that point a Fox News alert here: According to Reuters, just within the past few seconds North Korea says Trump's decision to scrap U.S.-North Korea summit is not in line with the world's wishes, and North Korea is saying it is willing to resolve issues with the U.S., according to state run media. This develops by the day, by the hour, Mollie.

MOLLIE HEMINGWAY, THE FEDERALIST: I think this is disappointing news but not completely surprising, particularly in the last couple of weeks, where you were seeing that North Korea and the U.S. were really pretty far apart. North Korea was proposing something more along the lines of what we have seen in past decades where they have an aspirational pledge that they will eventually denuclearize. And the U.S. is saying that's not going to work anymore. We want it up front, we want accountability, we want a clear timeline.

So they were far apart, and we'd heard that communications had really broken down. But I agree with Tom. This is not the end of the line. This is part of the negotiation process. And so what will be interesting and what is interesting about this Reuters report is I think people were careful whether North Korea would say we do want to make this happen and we're willing to work toward it or if they would respond with their old pattern of missile tests and other belligerent attitudes. But it's a long ballgame still.

BAIER: Amy, we're now getting officially from the South Koreans Yonhap that North Korea is willing to talk with the United States anytime in response to this decision to pull out of the planned summit, saying that they want to resolve the issues. So you heard Senator McConnell say the next step is North Korea's, and it seems like this is it.

AMY WALTER, COOK POLITICAL REPORT: Taking that step. Yes, this is what I'm fascinated to watch is the way in which Americans are reacting to this. Take away the back and forth here in Washington, but in polling what we have seen the last couple of weeks is that across the board, this is Republicans, Democrats, and independents were given the idea of a sit down between the president and Kim Jong-un high marks. They liked this idea.

And in fact in the last CNN poll the president's handling of Korea was the thing that people saw as the most positive thing he was doing. He got his highest marks on this.

So I think overall what American public is saying is we kind of like this idea. We don't really know where its' going, we've never seen anything like this before, but let's try it. What happens though if this does go wildly off track or if the summit never happens or if there's more saber rattling from North Korea or South Korea does something and there is a continuing sort of chaos, does that then ultimately impact the way that voters not just see the president but ultimately the way that he is able to handle any other foreign policy or any other foreign policy crisis?

ROGAN: Yes. I think the North Korean's know they have an interest in at least sitting down at the summit. Beijing wants that. They want to see it Trump is malleable. The letter suggested he is not. I think it goes ahead. And I think ultimately that message that we've just seen, that is as nice as it gets from the North Koreans. So a course for optimism.