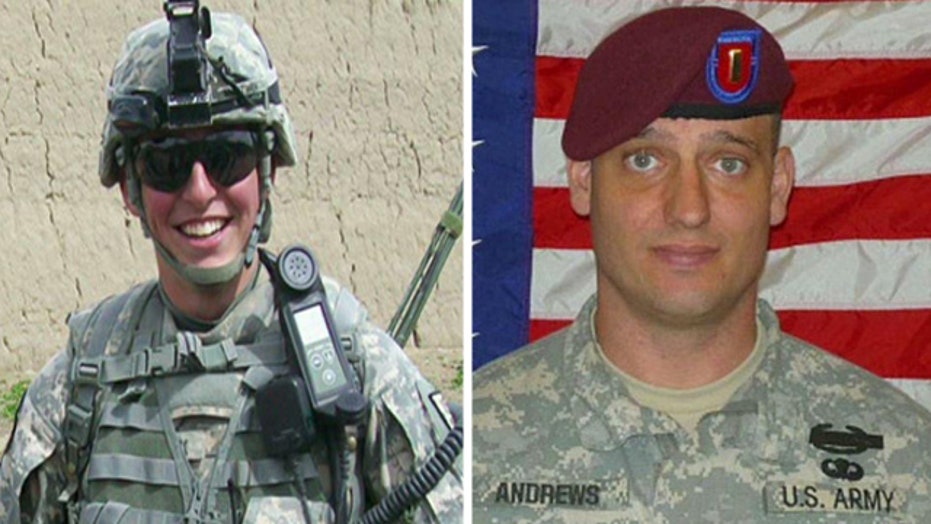 'No apologies' for Taliban trade: Families of fallen respond

This is a rush transcript from "Hannity," June 5, 2014. This copy may not be in its final form and may be updated.

PRESIDENT BARACK OBAMA: We had a prisoner of war whose health had deteriorated and we were deeply concerned about, and we saw an opportunity and we seized it.  And I make no apologies for that.

That was the president earlier today standing by his decision to release five Taliban terrorists in exchange for Sergeant Bergdahl. Now, the commander-in-chief did not address today the six men who died while searching for Bowe back in 2009 after he reportedly walked off his base in Afghanistan, converted to Islam, fraternized openly with his captors, and ultimately declared himself a warrior for Islam.

Joining me now to weigh in on this are the families of those killed.  Andy and Sondra -- now, Andrew's son, Sergeant Darryn Andrews, died while searching for Bowe, as did Matthew Marinek who is with us (ph), and his mother and stepfather, Cheryl Brandes and Ken Lucconi, are with us in studio. Guys, thank you all for being with us.

All right, you -- you lost your son. Every one of his platoon members said he left of his own volition. They heard a radio transmission saying there's a guy looking for the Taliban, and that your son was among those that gave his life. They spent over two months looking for him. I can't think of anything worse than losing a child.

What's your reaction to all this?

CHERYL BRANDES, SON KILLED SEARCHING FOR BERGDAHL: It's very hard.  It's very hard to live this day in and day out every day, I mean, for the past four-and-a-half years. When you first get the news that -- you know, first he was hurt, and you're hoping that he's going to be OK. And then you find out he's got a TBI, and then you say, OK, well, maybe he's going to go to Walter Reed and he's going to be OK. And then you have the final outcome, when you finally get to Germany, where he was at the Landstuhl hospital, and you get the final word of he's dead. He's not coming back home again. That's very hard.

HANNITY: And in light of the circumstances -- makes it worse, right?

KEN LUCCONI, SON KILLED SEARCHING FOR BERGDAHL: Absolutely. Not only the circumstances that...

HANNITY: And by the way, you weren't -- you didn't know the circumstances early, right?

LUCCONI: No. We -- we got word or started to hear rumblings about a year-and-a-half two, years ago of what was going on from -- Matthew was extremely well liked, and a lot of his fellow soldiers have kept in touch.

You know, the circumstance of the fact that we probably wouldn't be sitting here if that young man did not go over the fence or under the wire or how he escaped or left that forward operating base. My heart goes out to the Andrews because he was Matthew's lieutenant, and he -- the same incident took his life.

LUCCONI: Exactly. And they probably wouldn't be sitting here, either, except for that.

LUCCONI: And then to see five of the worst be traded -- so to me, I look at it, and both our other sons served and did multiple tours -- 12 years of U.S. troops, British troops, foreign troops, lives lost, families suffering, never seeing their children again for what? Was it, you know, a do-over or you know, we were joking?

HANNITY: How many people might have died even capturing these five?

Sondra, Andy, when did you hear about all this? Did you -- did you -- were you not told the circumstances, as well?

SONDRA ANDREWS, SON KILLED SEARCHING FOR BERGDAHL: We were not told the circumstances that have been released. We had indication from Darryn that a young man had left the base on his own volition, and they were spending hours and hours on their feet, looking for him. And that was really the only information that we had.

And we've -- we've maintained contact with the other men he was serving with, and the young man that Darryn attempted to save Matthew and the other young man because he pushed them down and fell on top of them, and took a direct hit. We've been in contact with the other soldier and several -- and they've never indicated that until this was released and they started calling and e-mailing me and on Facebook messaging, and saying, Mrs. Andrews, we want you to know what you're getting ready to hear, and this is what happened. And so they clarified the information at that time.

HANNITY: So your son was trying to save her son.

HANNITY: No, her son was trying to save your son.

HANNITY: Have either one of you guys heard from the president of the United States?

HANNITY: Have you heard from the president?

ANDY ANDREWS, SON KILLED SEARCHING FOR BERGDAHL: We got a letter.

HANNITY: He wrote a letter?

SONDRA ANDREWS: Well, no, he didn't really write a letter. He probably has a thousand letters on his desk, and he takes his stamp and signs it and has someone put it in an envelope and send it to you.

LUCCONI: That's exactly what it was, a form letter.

BRANDES: It was form letter.

HANNITY: You got a form letter.

BRANDES: Absolutely, a form letter. No call. No, you know, I'm sorry. No nothing!

HANNITY: You know, I know how President Bush did it. It was very different. And I saw him with Gold Star families, and I saw him come out of a room crying at the time. It wasn't reported. I didn't report it, either, because it was a private meeting.

HANNITY: You did meet with President Bush? So he contacted you?

SONDRA ANDREWS: I did. He did, and we attended a Gold Star Mothers' Sunday at his home in Dallas.

HANNITY: And -- and -- and he was not president when your son died?

SONDRA ANDREWS: No, he was not.

HANNITY: Wow. I know I speak for a lot of people, and no words can ever bring peace to your loss, and that's for both of you. And I'm very, very sorry. And I know how hard it must be for all of you every day to wake up and have to deal with this reality. Thank you all for being with us. Really appreciate it.

SONDRA ANDREWS: Thank you for the invite.