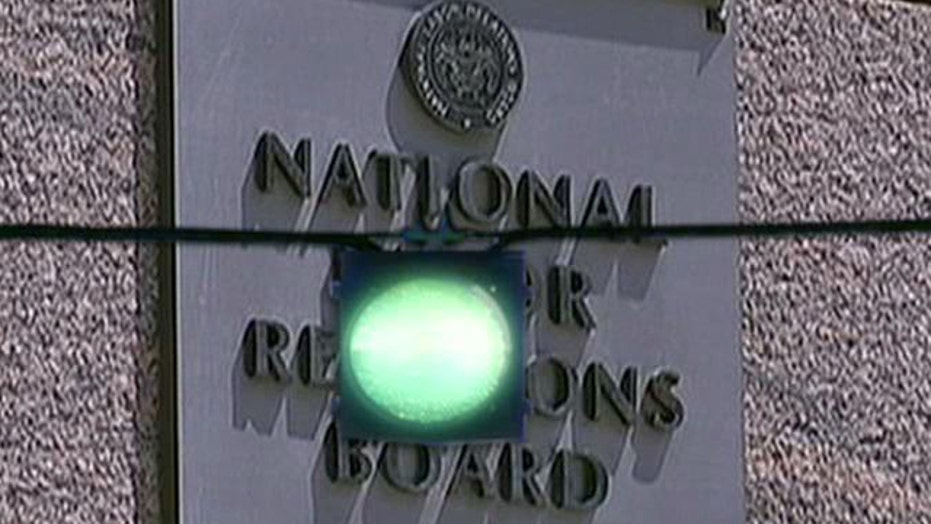 NLRB: Online gripes about work may be 'protected activity'

JONATHAN HOENIG: This is shocking, Cheryl. This is union-led government force that is tremendously destructive to the economy, destructive to businesses. I mean, whose company is it anyway? Is it the owner's or is it the government's? Of course, it is the owner's. Only the owner gets to decide who works there. You have no right to a job let alone one that you bad-mouth on social media. And if an employee is out there disparaging a company, disparaging other employees, it is incumbent on the boss to fire them. Hit the bricks! The NLRB or government has no role in this whatsoever.

JOHN LAYFIELD: This is ridiculous. This is a absolute grab for power. Jonathon is 100 percent right. This is not people sitting around the water cooler at work and bad-mouthing their boss to their co-workers. They have even said-these companies have said this is fine. This is not about going to your boss and complaining. This isn't also about bias, such as a gender bias or racist bias. This is people going on Facebook, calling their boss "scum bag," calling their bosses they "belong in a psycho ward." This is something that hurts business and Jonathon is 100 percent right. These guys are this dumb, they need to be fired.

MARJORIE CLIFTON: What we know is that 73 percent of HR professionals actually check social media before they hire someone. And absolutely, when you are hired by a company you are representing that company. I think you have to look at this in two ways. What the unions are arguing is- we still need the right to be able to organize, and if they do that by social media then they should be able to. I think in some ways social media can be an effective tool when constructively used to offer suggestions of things that can change. But in a lot of the cases they're citing, it is people making racist Statements, or inappropriate statement, that really fall under the category of slander. So I think absolutely it is the right of the business to be able to say "look, we want our employees to represent the company in a way that is a good light," but in another we need to look at making sure, as John mentioned, it is protecting gender, it's protecting race, and in those cases they need the right to be able to voice challenges that are real.

TRACY BYRNES: Cheryl, you and I have read some really rotten things said about ourselves from all the social media crap out there. And there's nothing we can do about it. God bless freedom of speech. You want to believe what you want to believe, that is your problem. A private company has the right to basically penalize you for just about anything you do that has anything to do with their company. Other than that you need to just go away. This is none of their business. If I want to make fun of the restaurant I was at last night, I have that right.

TRACY BYRNES: It is idiotic, that's what it is! My goodness, let's just tax something that in an ideal world is going to help everybody get better. Look, this goes completely against Obamacare. He wanted health care for all; practically give it away for free. "Oh, but by the way I'm going to tax it." You tax that vaccine, companies are going to be less inclined to offer it free to their employees, costs are going to add up that much quicker, and then people aren't going to get it. It will defeat the purpose.

JOHN LAYFIELD: No, absolutely not. We're not talking about a Polio vaccine, or a TB vaccine; we're talking about a flu shot, which 138 million have been produced this year. 112 million Americans have already taken this flu vaccine. There's research that says this flu vaccine doesn't work; that vitamin D is a better preventative measure than this stupid flu vaccine. A lot of people don't want to take it. I don't want to take it. I've never taken it. I don't want to be taxed for somebody else taking something that I don't believe works and a lot of research says doesn't work.

MARJORIE CLIFTON: What this fund is for is basically to protect researchers in the case of a suit or some kind of issue with the drug, and what it does is it allows them the freedom- it's like an insurance policy, like a driver's insurance policy, but for researchers, because as we know, the flu vaccine has to change constantly; it has to be innovative every year to deal with the new strains of the flu. So that's what this fund does. So the 75 cent tax increase would basically just allow that fund to remain stable, which allows researchers to continue to innovate. Now we already pay a tax on the flu vaccine, so it's really just 75 cent jump; which, if that still means that researchers are allowed to continue to change it so that we are protected- look, I'm all for it. And look, what's 75 cents?

JONATHAN HOENIG: Forget the fund. You've got hundreds of millions of people suffering from this terrible flu epidemic to tax it, even if it is an additional 75 cents, to tax even more is cruel and actually heartless. People want to protect themselves, and they're trying to stay healthy, and along comes government and says "no, no, no, no, no-- here's another thing we want to tax." To do what? To fuel their spending addiction. I mean whatever happened to a benevolent government? This is actually cruel and heartless, especially during an epidemic.

COLLEGE KIDS FEEL MORE ENTITLED THAN EVER: PARENTS OR SCHOOLS TO BLAME?

JOHN LAYFIELD: It's already backfired on America. There is nothing that gets my dander up more than everybody gets a trophy nowadays. It's not "hey, little Johnnie-- you didn't work hard, you didn't try. And just because you lost, we're going to give you a trophy anyway." That is a massive disservice to kids, but it's all this kumbaya moment that "Oh, we can't offend any little kid and not give them a trophy." If they don't try, they shouldn't get a trophy; they should learn that early in life.

TRACY BYRNES: The trophy thing drives me insane because on1-it gets the kids to come back out next season; two-- it ends in like fourth grade. You lose in like third, fourth grade; it doesn't go on forever. My kid was in the Super Bowl- he lost. He went home with his head held high, though. He learned a valuable lesson. You do lose. It is not like you get trophies until you're 25. And look, it's the other side of this story, too. All schools want to give out A's because they want their district to look the best on paper, and they want their kids to go to the best colleges, and they want them to score high on tests. It is not just our kid, it's not just our league programs that are screwing our kids- it's the other side, too.

MARJORIE CLIFTON: Look at the reality of the work force right now. I think the rude awakening to a lot of college students is they're going into a really tough job market where they have to earn their way. I think it falls on parent a lot in how you raise your kids. I am the oldest of five, and in our family, you can have your win, but you always had all these siblings to keep you in line afterwards. And I think a culture of graciousness and generosity and thinking of others is really important in terms of even bettering our country and making progress.

JONATHAN HOENIG: We have a culture not of generosity but a culture of egalitarianism. And that's exactly, Cheryl, what this is. That's what this "everyone's a winner" mentality is. It's actually egalitarianism; it's the idea of equal rewards for unequal performance. Everyone's a winner. And Cheryl, to your point- where is it taught? I think it's taught in the schools. Unfortunately, today's parents were raised in today's schools, and that's why this egalitarianism is just the scourge of this modern culture.

TRACY BYRNES: So how's this for another case of hypocrisy in the White House-President's pick for Treasury Secretary, Jack Lew-he worked in a division at Citigroup that created products that kind of caused the financial meltdown. What's he thinking?

JOHN LAYFIELD: Verizon is a cash cow. They have almost a 5 percent yield. I they ever get spun off for Vodafone phone I think it's going to be a great thing for Verizon, but either way this is a great stock to own.

JONATHAN HOENIG: I know that stocks are hot, but senior loans are actually a very strong asset class right now. We've talked about BSL, FLOT-SNLN is another one that I like and own. When short-term rates start going up, this is one of the few income-oriented investments that can actually do well, as well. I think now's the time to kind of be a banker, and SNLN is one of those strong names.