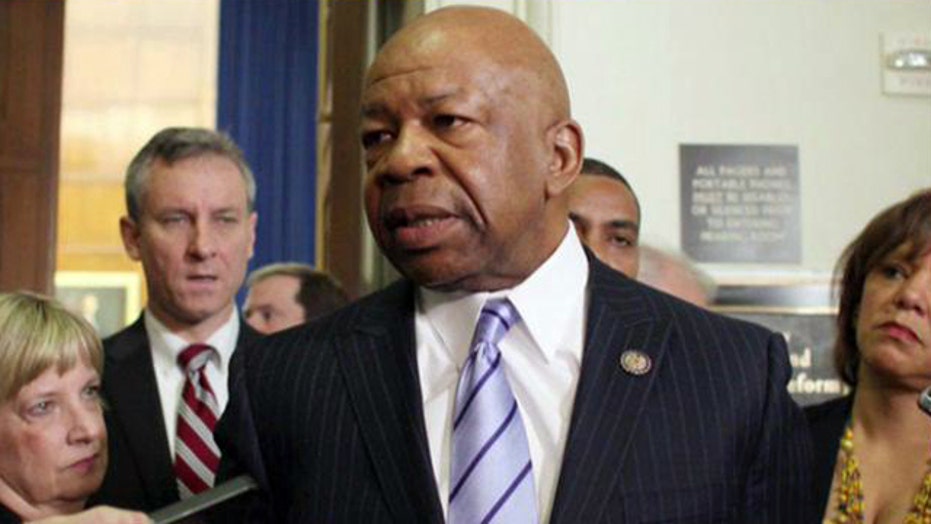 This is a rush transcript from "The Kelly File," April 14, 2014. This copy may not be in its final form and may be updated.

MEGYN KELLY, HOST: The top Democrat in congress investigating the IRS scandal now finds himself at the center of the targeting allegations. In February, Democratic Congressman Elijah Cummings denied any involvement with the actual targeting of the political group True the Vote. But now, they have just released documents, the IRS has, that appear to prove otherwise.

When this story first broke last week, Congressman Cummings declined an invitation to appear on our show and answer to the charges, but he did appear on "Face the Nation" this weekend with Bob Schieffer, and did not get asked one question about this.

CLETA MITCHELL, TRUE THE VOTE ATTORNEY: That's pretty unbelievable. I don't watch "Face the Nation." So, I wasn't aware of that.

KELLY: Not one, it's not like Elijah Cummings has been in the news for a lot of things over the past week. I mean, not one question.

KELLY: I wanna walk the viewers through what your allegation is, and I wanna tell the viewers up front that he denies it, as he denied it when you first accused him of it. Your client, True the Vote, was targeted, that she's -- Catherine Engelbrecht has this organization that was targeted by, what -- six different agencies, personal audit, federal audit, business audit.

KELLY: You name, it, OSHA, FBI, they all started cracking down at her, after she formed this organization, conservative group meant to get people registered to vote down in Texas. Then she gets targeted. She's one of the ones who got targeted when she applied for tax exempt status. You came to believe that the IRS was coordinating with Elijah Cummings and his staff -- the minority staff, meaning either they are not the majority in the House, that's investigating the scandal, but prior to that. When the scandal was going on, you were saying that the IRS and Elijah Cummings' staff were coordinating?

MITCHELL: Well, that's right, because curiously, in the spring of 2012, True the Vote received questionnaires from the IRS containing over 100 questions. Now mind you, this is nearly -- at that point, it was 18 months after they had filed their application for exempt status and waiting all that time and then to be hit with this huge list of questions.

Fast forward about six months, and remember that's when Congressman Issa and Congressman Jim Jordan asked for the inspector general's investigation into whether or not Tea Party groups and conservative groups were being targeted.

KELLY: And they're starting to get a whiff of it. You know, there's something is not right here.

MITCHELL: That's right. And so, then -- beginning in the fall of 2012, about six months later, Elijah Cummings announced that he had undertaken an investigation of True the Vote. Now mind you, he has no authority to do that. That is beyond the jurisdiction of that committee.

MITCHELL: To start investigating a private citizen's group in Houston, Texas. And he announces on national television and submitted three different -- three or four different letters to True the Vote demanding all kinds of information.

MITCHELL: But curiously, almost the same information the IRS had demanded about six months earlier.

KELLY: OK. So, just to advance the story, so you smell a rat. You say something is weird, that it seems like they are coordinating, which they should not be doing, right? That's your allegation.

KELLY: OK. So, you have the opportunity to appear before the subcommittee in February.

KELLY: And you raised the allegation of coordination. Let's watch it.

MITCHELL: We wanna get to the bottom of how these coincidences happened and we're going to try to figure out whether any, whether there was any staff of this committee that might have been involved on putting True the Vote on a radar screen in some of these federal agencies.

CUMMINGS: I want to thank the gentleman for his courtesy, what she just said is absolutely incorrect and not true.

MITCHELL: Well, what we -- what that clip doesn't show is that what we did that day immediately following the hearing was we filed on behalf of True the Vote a complaint against Representative Cummings and his staff, asking the Office of Congressional Ethics of the House to investigate, to find out what they did and that's what he was reacting to because he saw the complaint. We attached it to our testimony. And --

KELLY: So, he was denying it. But now -- so, what happened last week that has, you know, made some headlines -- although apparently Bob Schieffer didn't see them -- is an e-mail came out to Lois Lerner from another person in the tax agency, to Lois Lerner, the woman at the center of the targeting scandal. So, this is two IRS people talking to each other about their communications with Elijah Cummings' staff. And if you can put it -- well, I can't see it on this little board here but, it says the House Oversight Committee would -- they have requested any publicly available information and you can see right here, to Lois Lerner. It's about communication with the House Oversight Committee minority staff. They say the entity they want the information on is True the Vote. They want tax returns, they want any publicly information -- publicly available information and this appears to call into question Mr. Cumming's denial to you.

MITCHELL: Well, it absolutely does because he said that there was no communication essentially as what he said, with any federal agency about True The Vote, which turns out not to be true, and we went ahead and filed our ethics complaint and asked the Office of Congressional Ethics to investigate him. And then last Thursday, after we saw this, we supplemented our complaint and said you're the only ones. The House Ethics Committee is really the only ones that can get Congressman Cummings' e-mails, and documents and all the communications from his staff. See, we don't even really know what the IRS gave to Congressman Cummings and his staff.

KELLY: You're not supposed to be having, you know, a partisan person, whether it's Elijah Cummings or a Republican on the other side coordinating with a mostly independent agency -- the tax agency about people's tax returns and other information, even if they are publicly available. Am I correct? That is not supposed to be happening.

MITCHELL: That's absolutely --Megyn, you have really put your finger on what is the underlying problem of this entire scandal, which is that the Lois Lerner and the top brass at the IRS came to see its role as somehow the enforcement arm of the Democratic Party and Democratic members of Congress and the White House and they began to carry out these activities to pursue conservative groups because these politicians were demanding it.

And yet, all of these people, Lois Lerner, all of them, they have civil service protection and the only difference between what happened in Watergate when Richard Nixon asked the IRS to go after his political enemies was when Richard Nixon asked, they refused. When these Democratic politicians said go do something about these conservative groups because they are challenging us, and we don't want what they are saying about us, the IRS took it upon themselves to do their bidding, and to try to silence these groups. And in this case, Elijah Cummings said to the IRS that he was undertaking an investigation of True the Vote. Now there is nothing proper about that.

KELLY: He denies doing anything inappropriate. He says his communications were all appropriate but he has not elaborated on that, and won't come give us a full statement, which we would be happy to hear him out on. It was curious, I have to say, Cleta, however because he was one of the first to go out there and -- I'll just play the sound bite quickly before we end -- and to clear this thing over long before it really was. Watch.

CUMMINGS: Based upon everything I've seen, the case is solved. And if it were me, I would wrap this case up and move on.

KELLY: I got to go. We'll talk to you again.