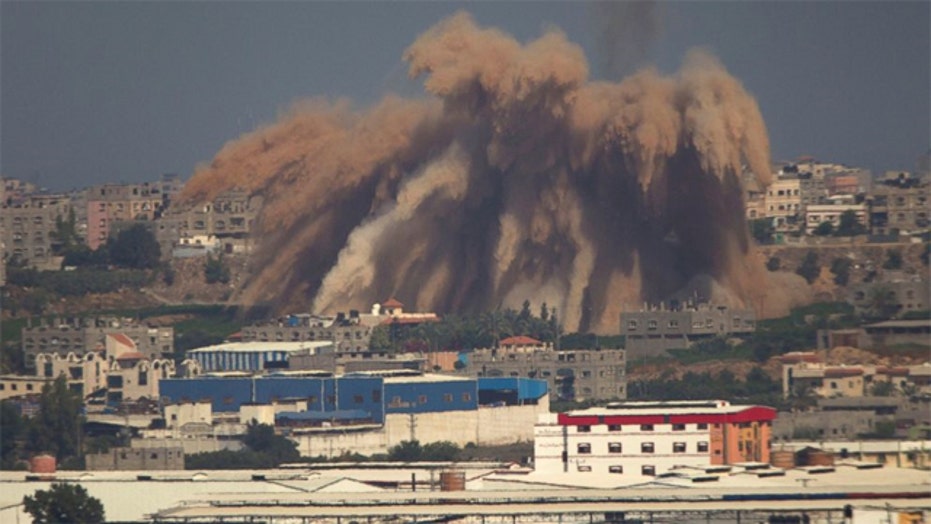 This is a rush transcript from "The Kelly File," July 22, 2014. This copy may not be in its final form and may be updated.

MEGYN KELLY, HOST: Breaking tonight. The death toll continues to climb on both sides of the conflict between Israel and Hamas today. But the Palestinians seem to be winning new sympathy as they bear the brunt of the losses, despite many, many attempts on their part to kill Israelis. Here's a little of what we've seen on TV over the last 48 hours.

UNIDENTIFIED MAN (through a translator): They killed innocent children, women and elders. We're using the building as a shelter, they thought this place was safe.

UNIDENTIFIED BOY (through a translator): They hit us with missiles, they kill us and destroyed Gaza and destroy our houses.

MUSTAFA BARGHOUTI, PALESTINIAN NATIONAL INITIATIVE: I'm sorry for every death, whether it's Israeli or Palestinians. But the numbers and the facts are very clear. And they do undermine the whole Israeli propaganda that is trying to dehumanize Palestinians as if their lives are not as precious as the Israeli lives.

KELLY: Joining me now, John Bolton who is a former U.S. ambassador to the United Nations and a Fox News contributor. And so, this seems to be the Palestinian strategy, is to get out there and talk about the civilian deaths, which no one likes to see, but which Israel's defenders say, A, they try to avoid. And B, Hamas is putting these people in the line of fire, and there's not much Israel can do about it, if they want to stop the rocket fire coming into Israel.

JOHN BOLTON, FORMER U.S. AMBASSADOR TO THE U.N.: Well, it's the inevitable consequences from NASA strategy and very cynical, somewhat successful, but otherwise, you have to say Israel, your civilians are going to be in jeopardy, because of the barbaric way that Hamas uses its civilians to shield its military capabilities. So, I think for Israel they've got to just grit their teeth and keep on going.

KELLY: So, to those Americans who don't pay as close attention to this, I mean, you see the children wailing and you see these devastating scenes with these dead bodies and they appear to be innocent civilians, I mean, what do they need to understand?

BOLTON: Well, they need to understand that the instigator of this has been Hamas, and I think more fundamentally, Iran, which has supplied the longer range, more sophisticated rocket capabilities.

KELLY: Explain that. Why does Iran want to see this war going on between Hamas and Israel?

BOLTON: Because Hamas and Hezbollah and Lebanon, they're two sides of the same coin from Iran's point of view. They're ways to put military pressure on Israeli civilians to keep Israel pre-occupied and pinned down and not focus on Iran's nuclear weapons program which continues to move along. It's a very complicated situation here. But the fact is, what Hamas has done over the years, is conduct war against the state of Israel. And unless you're prepared to say, that you can only engage in war in a limited fashion, when you're constantly being attack, clearly Israel's got both a right and I think an obligation, a moral obligation to protect its own civilians, we would feel the same way.

KELLY: This is -- Andy McCarthy has an interesting piece out today in PJ Media where he talks about the Hamas charter, Article 7 which says the time will not come, "The prophet says, the time will not come until Muslims will fight the Jews and kill them. Until the Jews hide behind rocks and trees which will cry, oh Muslim, there is a Jew hiding behind me, come on and kill him." How on earth is Netanyahu going to negotiate with these people?

BOLTON: Well, he shouldn't. I don't think you can negotiate with terrorists, and I think fundamentally the Palestinian authority has demonstrated it's not interested in negotiations either, by forming a coalition with Hamas. This should result in both of them being shunned in my view, instead the Obama administration has just given over $50 million more, quote-unquote, "humanitarian assistance for the Palestinian authority."

KELLY: And now today the FAA banned all U.S. aircraft from flying to Israel's main international airport. Israel is sort of responded by saying, gee, thanks a lot, that's going to help a lot. Meaning it's not going to help us at all. What are your thoughts?

BOLTON: Well, I would like to know who influenced the FAA's decision. Because I think in the Obama-Kerry, paradigm of the world, this puts economic pressure on Israel to increase the likelihood they'll agree to a cease-fire. In my way of thinking, it proves precisely the opposite. It's why Israel can't live under this constant threat of being rocketed.

KELLY: They don't seem shy about defending themselves.

BOLTON: Why should they be?

BOLTON: Why should they be? You know, international public opinion in my view can go take a flying leap. When your civilians are being attacked by terrorists, threatened by a nuclear weapons state like Iran. You do what you have to do to protect your people, especially in a democratic society.

KELLY: Last question, you've explained why Iran likes this fighting. Between Hamas and Israel -- I mean, do they take their marching orders from Iran or is it all about ginning up a propaganda campaign for them? Oh, look at, you know, what's happening to us, poor us and the evil Israel.

KELLY: It's Hamas charter article 7. Ambassador, good to see you.