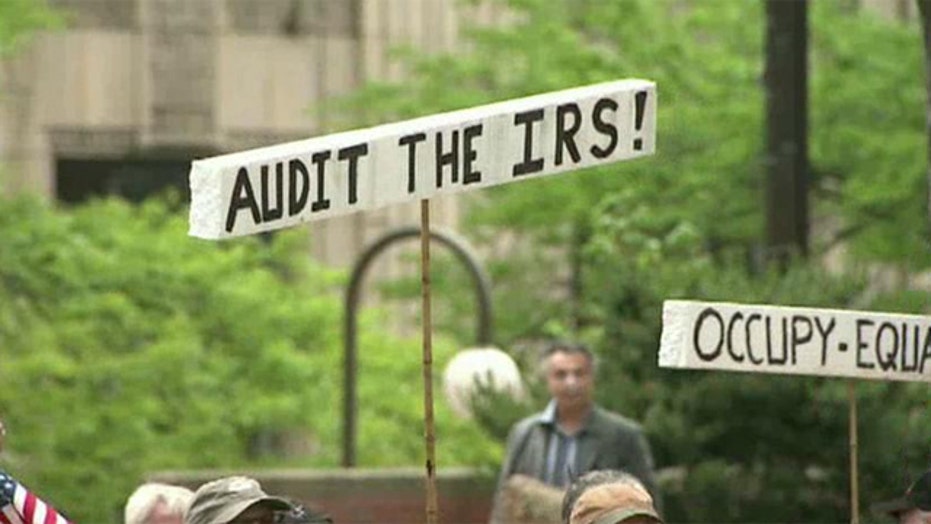 Victims of IRS profiling speak out

IN FOCUS: During a House Ways & Means committee hearing this week, Democrats were unable to provide any "liberal" leaning groups as being targeted by the IRS

STEVE FORBES: Obviously, its politics. They went after those organizations to make sure they didn't participate in the 2012 elections; they went far beyond just doing a routine audit. They did not target liberal groups. This is going to end up in Washington and its going to have a special prosecutor. This is going to end up like Watergate, this is bad stuff. This wasn't just a handful of enemies; this was anyone who put their head up above the parapet.

RICK UNGAR: It may be politics at play but where I have to take some exception is saying that it's going to end up in Washington. I'm a little old fashion about this. I think there needs to be evidence before you convict somebody. So far there has been no evidence that even puts it in the lower levels of Washington, let alone the people you might want to see get tagged with this.

SABRINA SCHAEFFER: I think we are going to see more evidence coming out. This is not about the rule of law; this is about the Obama administration trying to control the flow of information. I am sensing a pattern here, between the IRS scandals, the media tracking scandal, the NSA spying on average Americans, this is an administration that wants to control the flow of information and it's suddenly coming to a head here with the IRS scandal and I couldn't agree with Steve more about this.

MORGAN BRENNAN: This is a political issue for no other issue that you're talking about tax exempt status for organizations that identify themselves politically. Whether this is a one sided witch hunt, just how far back to Washington this goes, I think a lot of that remains to be seen. I think it's unfortunate, the bigger issue here for me is the fact that 501c's have been a super secret area for campaign funding, which is what it's not supposed to be; I think that is getting clouded over.

JOHN TAMNY: Of course not this is political; people are realizing that people act in their self-interest. In the private sector, that means businesses give us what we want in terms of products and services. When it comes to the government, an entity that is unaccountable, that is not liked by certain outside groups, they are going to investigate those groups. I think the IRS's actions are scandalous, but what is scandalous to me is the fact that the IRS exists to begin with.

BILL BALDWIN: I think these complainers would have saved a lot of grief if they just took the word tea party out of their applications and put in an innocuous name such as coalition for health care outreach if they had called themselves Americans for big government, they would have been fine. The bigger scandal has nothing to do with C4, the bigger scandal is with C3, and these are the ones where you can get a tax deduction for giving them money. The scandal is overtly partisan groups set up semi-autonomous C3s called, foundations, called education and gets these tax deductable donations to do what they are going to do.

A new survey shows two-thirds of Americans who don't have health insurance....may not buy insurance offered under the health care law

STEVE FORBES: If they don't get everyone into this then obviously they are going to have more costs. They have designed it in a way that younger people even with subsidies are paying more than they should in a normal free market. Initially, younger people are going to say, if they catch me, I'll just pay the small fine and not have to pay 5-7,000. If you go on these exchanges and make apples to apples comparisons, California and Oregon, Permanente plans, you will find out you pay more on the exchanges then you do on the free market because the government puts in a lot of stuff that most people don't want.

RICK UNGAR: California exchange rates are coming in better than what we expected and people under 25, the mean income was under $25,000 a year which qualifies a large percentage of them for subsidies would be paying less than they do now.

MORGAN BRENNAN: I think it's safe to say that premiums are going to go up for some people. How much and what it's going to look like and for the people that it will go up, a lot remains to be seen. These exchanges don't even open up until October. I think there is a lot for Americans to focus on and they are focusing on before we even start to look at this. We just had the jobs number come out this week, we still have about 20 percent of young adults without jobs, and they are looking to get those jobs before they think about enrolling on exchanges so I think it still premature. We also have the debt ceiling debate that is going to go on before this even takes place.

BILL BALDWIN: I think costs are going to come in less than expected. Anyone with common sense expected costs to triple; instead they are only going to double.

SABRINA SCHAEFFER: The big problem is that the government is mandating that people buy something they don't need. The minimum essential coverage is so high that they are ineffectively telling people they need to buy a 5 bedroom house when they really need a 1 bedroom apartment.

The TSA finally canceling its plan to allow knives, bats and golf clubs on planes

SABRINA SCHAEFFER: I don't think anyone on the panel can say that asking moms to take the little booties off their babies or making me turn over manicure scissors is actually keeping us any safer. It is probably making us less safe because everything is so systematized, so regularized that terrorists or those who want to hurt Americans will know how to navigate the system. We need ways to make the system more efficient and try out new screening techniques.

STEVE FORBES: Especially when there is a delay and tempers are rising up, you don't want anything in people's hands. Privatized airports are more efficient than those that aren't. San Francisco vs. Los Angeles; San Francisco I 50-70 percent more productive, even though they pay the same wages, go through the same training and operate under the same agency. What this goes to is, privatize, the TSA can set standards as the FAA does but let companies figure out how to do it more efficiently and come up with innovations.

JOHN TAMNY: That's why you privatize. If American doesn't protect its passengers, they go out of business. If the TSA doesn't protect it, it gets more taxpayer money to expand its bureaucracy. The profit motive is the path to innovation. Airlines will compete to figure out the best and safest ways to get people through airports. Let the people compete here.

MORGAN BRENNAN: I think you keep the TSA minimally there to set the regulations and I think you bring private sector workers in to operate at the airports and we are seeing more and more airports apply to have this scenario at their locations. Sarasota-Bradenton was the latest one this week. Congressman John Mica, the grand daddy of the TSA, is proposing this as well.