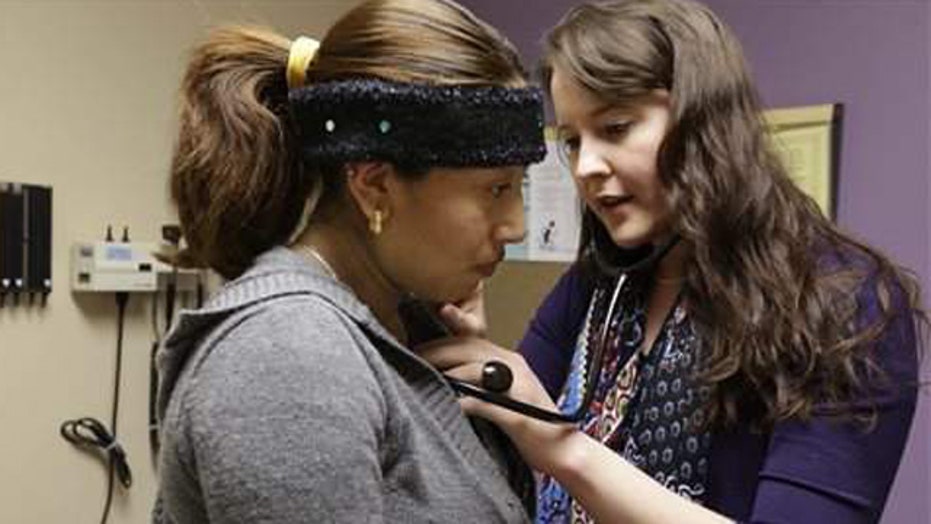 New ObamaCare premiums come as shock to some consumers

Time to rename it the Unaffordable Care Act?

NEW OBAMACARE PREMIUMS COMING AS A SHOCK TO SOME CONSUMERS

JONATHAN HOENIG: For many people, Eric, premiums are going up substantially exactly opposite of what the President promised. It's no surprise, really. We were predicting it on this show for over a year. Where do lower premiums come from? Where do lower prices come from? They come from man's ability to think, not government's willingness to force. And that's exactly what ObamaCare is; it's force brought to healthcare. We've has really no healthcare freedom in this country for decades, less and less. ObamaCare eliminates it completely. So just like education, you'll see costs go up and quality go down the more and more that ObamaCare continues to grow.

WAYNE ROGERS: The best part of it is when they went out on the street recently and asked people "which do you prefer: the Affordable Care Act or ObamaCare". People didn't know the difference; they had no idea what they were talking about. You've got a bill here that's 2,700 pages long with all these regulations. There's no way for anybody to understand what it's all about. There's no way for people to comply. There's no way, as you said, to get-it's not going to get cheaper. It's going to cost us a bundle before we get through.

EBONI WILLIAMS: That's where we as young people have to be a little more holistic in our view and approach to this thing. Yes, these premiums are a little higher for younger, healthier people. I am one of them. I have looked online as well and seen that price was a little bit of a sticker shock. But again, let's look at the big picture here: there is a new day in terms of the standard of healthcare in this country. No longer are people being turned away for pre-existing conditions. And guess what? Yes, that is going to cost longer in the short-term. But long-term we're going to be better off and people need to look at the big picture here.

MICHELLE FIELDS: Let's talk realistically. What young people are going to do, and what they have been doing is logging on to the website, if they're lucky and can do that and have a lot of patience. They log on and they see the number that they're supposed to pay, and they're not paying for it because it's going to be so much money. There is a reason why the Obama administration hasn't released the number of people that have successfully signed up for ObamaCare-and that is because no one is signing on. ObamaCare relies on young people to sign up, but if you look at all 50 states, premiums are going to go up 260 percent on average for young people. You really think young people are going to sign up for that and take a holistic approach? Get real.

MICHELLE FIELDS: What kills me is the government was trying to prevent WWII veterans from getting inside their memorial, but when it comes to their friends over at PBS they remain unaffected by the shutdown. What I think this administration is trying to do is make the shutdown as difficult as possible for the American people. That's what they're trying to do. But when it comes to their friends, they make sure that they remain unaffected. This is what happened with sequestration. The Obama administration didn't cut back any salaries or any of his staff. What he did was he cut the White House tours for all of the American people so they can't go visit. So this is all just politics, and it's just trying to make it painful.

WAYNE ROGERS: It's not really wasteful-it's outrageous that he should pick out what he wants and not what the people want. It makes no sense. I read the other day that people who were in the park in Utah wanted to photograph Old Faithful and the guard said "no, you can't photograph". What is that? I mean are we in a Fascist country? What's happening here?

EBONI WILLIAMS: It is crazy. I will say as the liberal on the panel here: I don't buy into this conspiracy. I don't think that PBS should be funded right now, but to be clear, these are pre-appropriated funds that are allowing them to stay up and running, and it does not feel "appropriate"-pun intended there. I agree with you guys on that. But we're asking our government to make smart priorities, and we already know our government is incapable of doing that because they're prioritizing politics over governing the American people. So this is not surprising to me at all.

JONATHAN HOENIG: Big bird shouldn't be funded in a closed or open government. What is the role of government? Is it to produce children's television? I mean is it to fund green groups? Is it to funs crony capitalists? Of course not, it's role is strictly defined. I actually disagree with Wayne. Government's role is not to do what the people want-it's actually solely supposed to be protecting individual rights. So the role of government is supposed to be specifically limited; that's what the founders intended. It's not democracy, it's not a majority rule, as Alan Grayson and so many others would have you believe.

WAYNE ROGERS: We know what happened in Washington, for example, the protests down there where a Walmart was going to open; outside of Chicago, Jonathan's hometown, where they rose against it. They're not only going to China because of the big push because of the protestors-there's also an attraction. If they think they can do more business in China and do it cheaper, they're going to do it. It's a free-market system.

JONATHAN HOENIG: It would create a tremendous amount of wealth. China should be happy Walmart wants to come set up shop. Residential real estate values actually rise wherever Walmart builds a store; you've got people lining up to shop there, people lining up to work there. To Wayne's point, protestors and union folks love to use government to try to clamp down on Walmart, but they're clamping down on people actually achieving their values: getting great value for their dollar, and getting employment-not to mention great returns for their shareholders, as well. It's pretty sad that Walmart is getting better treatment in China than they are in the U.S.

MICHELLE FIELDS: They provide so many jobs, provide so much economic growth, but there are so many liberals and democrats out here that treat them like a bunch of criminals. You can't blame them for wanting to go to China. Just like Wayne said, look at what happened in DC; the union bosses pushed to make the minimum wage higher for Walmart-and only Walmart-because they wanted to make it too costly for them to do business here. I mean shouldn't we be promoting and trying to encourage businesses like Walmart to open and expand? Why are we trying to move them to China?

WAYNE ROGERS: Stay away from stocks until dust settles from D.C. mess

JONATHAN HOENIG: Middle East is a mess but you can make money with (MES)