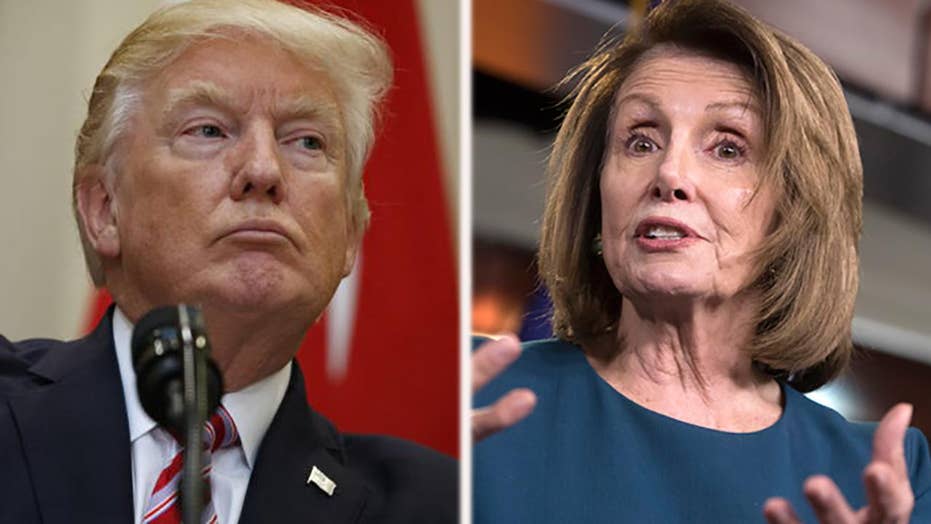 New focus on timeline for tax cuts amid criticism from Dems

John Layfield: Where was this doomsday prediction when Nancy Pelosi with the rest of her congressman Republicans and Democrats watched debt go from 5 trillion in 2000 to over 20 trillion today. I've looked at the four major tax cuts the last hundred years and closest to this is the 1960s because you had a decent economy like now and then the tax cuts of Kennedy carried out by LBJ. GDP went to 6 percent for two straight years and treasury revenue increased, this apocalyptic vision is showing an ignorance of history or choosing to ignore it.

Stacy Washington: We're talking about a major overhaul of our tax system and it's a win for the republicans and it's something that the president ran on so he has been running with this, getting it over the finish line, and they don't want that. Do you know what looks like Armageddon if that's what this is? A lot of people out shopping, the GDP is through the roof, joblessness claims are down, everything is looking rosy so if that's what Armageddon looks like bring it on baby I'm loving it. I encourage everybody to go to taxplancalculator.com you can type in your own real numbers from last year and you can see what your current tax was, what your tax will be under the House plan and tax will be under the senate plan.

Gary B. Smith: I think this tax plan is the way to go. The Tax Foundation has run a scenario and this is not a tax cut for the rich. Actually the biggest percentage cuts go to moderate income families with children. Look, even if Pelosi wanted to fix the debt you could raise taxes to 100 percent and you're not going to pay off the deficit, the only way to do that is to cut back on entitlements. Cutting the deficit is a whole other thing that needs to be tackled separately.

Adrienne Elrod: This bill does raise taxes on over half of the middle class families. Secondly, the process for getting this bill passed lacks so much transparency. Lobbyists on K-street were oftentimes getting copies of the bill as it was changing throughout the course of several days before senate democrats were getting copies of it, so I think a lot of us are still trying to figure out what's actually in this 500 page bill.

Jonas Max Ferris: First of all, Pelosi's point that you don't get out of this tax plan- with these half-baked tax plans, they expire in 10 years so it will get out of itself eventually. That all said the reality is look, if you do a tax cut, it pays for some of itself with stimulus: some of that comes back in economic activity. But both cause deficits to go up overtime. This tax cut is actually very small in relation to our economy, we're fighting over a relatively small issue here.

Stacy Washington: First you have the dossier, and it's paid for by the Clintons and then also the DNC. The dossier goes to the FBI and the FBI repackages the dossier, classifies it and puts it forward for a five application. The five application comes through they start monitoring people in Trump world and then they take down Mike Flynn. It's a dangerous thing to weaponize an agency of the United States Government and it's even more dangerous if it goes unaccounted for so this is a serious issue the Clintons should not be above the law.

Gary B. Smith: Hillary Clinton lost. That's her punishment and obviously she's stewing at another level of hell out there because she can't get over it. We spent almost $7 million on Mueller's investigation, do we need to spend millions more? It's horrible, Washington is a swamp but Hillary lost let's move on.

Jonas Max Ferris: Well let's separate bias from just the general treatment that rich and famous people get. You get attention being a celebrity for doing something wrong but you also get treated better than the public. I've got a hard time thinking the FBI is a fundamentally biased, democrat leaning place where people work. I just don't believe that.

John Layfield: There's been 21 special investigations since the Carter administration only twice has the principal person being investigated been indicted and you talk about the FBI being used as a weapon- J. Edgar Hoover with Dr. King, the Beatles, Albert Einstein- look this is nothing new. This is politics as usual. We have no real policies getting done.

Adrienne Elrod: The fact that republicans continue to try to find ways to discredit Robert Mueller is hilarious because first of all he is a republican. Secondly, many of us on the Clinton campaign, many Americans will argue that James Comey reopening the investigation 12 days before election day is big part of the reason why she lost. You can't sit here and praise Comey one day and discredit him the next in the way he handled the investigation, and same with Mueller. The reason why we know about these text messages is because the inspector general from the department of justice looked into this and Robert Mueller immediately fired him.

Gary B. Smith: One, Donald Trump said it so of course they go the opposite way and two, every one of those past presidents has backtracked on their commitment- make nice to the bully hoping there would be peace- it's not going to happen. I hope trump sticks to his word.

Stacy Washington: I totally support this move, it's a departure from the previous presidents who promised to do it and it puts the Palestinians in the hot seat- they have to really prove they want peace at this point.

Jonas Max Ferris: First of all we didn't have a social media outrage machine when these other presidents mentioned moving the embassy so things are a little different now. Trump also doesn't say one thing to one audience and another thing to another audience like all these other presidents, so that's Trump being Trump in some ways.

Adrienne Elrod: But look this is not the right time to do it. Our allies in the region made it clear this is not good that we are seeing all of the chaos this is causing and certainly not going to help Trump's quest to reinstate some sort of peace process in the Middle East.

John Layfield: The Middle East has been in turmoil ever since the beginning of time. President Trump is just recognizing the reality on the ground that Israel considers that their capitol and I think that's right.

Gary B. Smith: Learning from delays! (UPS) delivers a 20 percent gain in 1 year