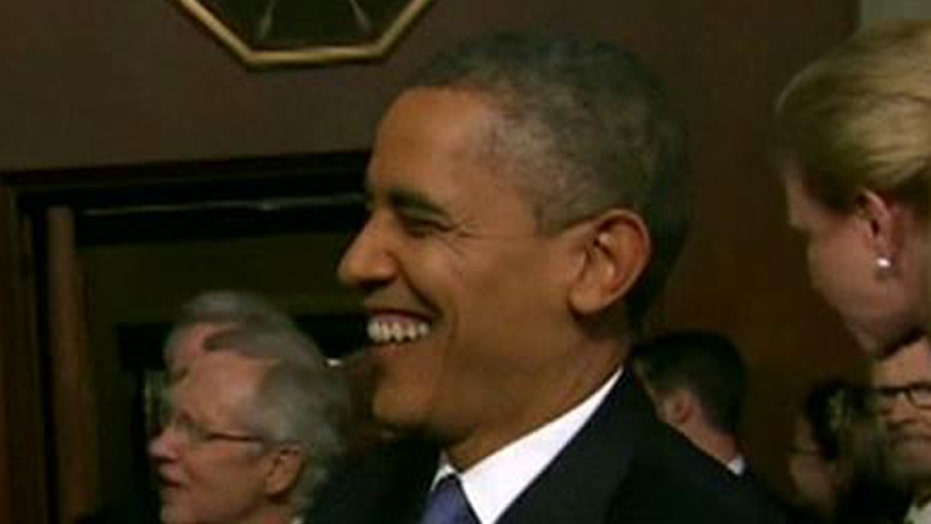 Who's going to pay for all of this?

Charles Payne: Well I tell you with the infomercial...I'll take two of those sausage machines, unlimited food stamps, and a money back guarantee, because...outside of the vaudevillian aspect of this is, it was an extraordinarily dangerous State of the Union speech. And the overall tone was if people have it, they got it nefariously and I will get it for you. Oh no, it's not gonna cost the government anything, but obviously it's gonna cost something... I know where to get that money, I'll get it from the people that somehow got it from main street. You know how they got it from them, I'll go and get it from them... don't worry about it, it's not gonna cost you a dime?

Gerri Willis: You bet, I mean no doubt about it and I have to tell you I think it's immoral. To make all of these promises when you know at the end of the day you can't afford it. We can't afford it. To say pre-school for everybody...are you kidding me? We don't have the money for that. He also promises mortgage assistance - 3,000 for everybody. This is just crazy talk and I think it's immoral to put this across as something that's actually do-able when it's not.

Charlie Gasparino: Yeah, I mean there is a fantasy sort of aspect to the Obama presidency you know, like health care is gonna pay for itself. I mean, yeah right. We can just spend the money on the stimulus, we don't care where it goes -- it'll be good for the economy. Guess what? You fund Solyndra instead of shovel-ready projects as we know that's what happened. I will say this, the president generally politically, just politically is at his worst when he is the most liberal. If you look at when the Republicans actually won the House and picked up seats in the Senate, it's when he was pushing his big government agenda. When he backed off of that, you know the second year, the second year-and-a-half, that's when Barack Obama seems a lot more reasonable. I think he's overshooting and I think he's gonna shoot himself in the foot with this stuff.

Adam Lashinsky: It's funny I knew, I could just sense in my bones that we were coming to Nancy Pelosi first on this subject. I think...I don't think so. Here's what they're saying...they're saying it isn't a spending problem, it's a political problem in fact, we can pay for all sorts of things.

No, you have to have it coming in. It's funny how we listen, we hear what we want to hear. The President also spoke in that fantasy speech Charlie...about cutting spending in other places, about raising revenue in other places. The question is...just let me finish Charlie, then it'll be all yours. The question is what do we want, what do we want to pay for? What as a country are we interested in spending on? That's what the Democrats are saying...as I said before.

Gerri Willis: It's not a good drift and I know look...the two CEOs said nothing's gonna go wrong here, we're gonna keep the prices low, we're gonna move them down. No, that's not true, that's not gonna happen...prices are gonna go up. Listen, we saw prices go up after the Delta merger on individual routes as much as 20 percent and over the past 12 years, prices have gone up 27 percent...not too bad, but that doesn't include baggage fees, that doesn't include the cost you pay for that extra legroom seat...let me tell you...prices are through the roof, and they're only going up.

Charles Payne: I cringed when I heard the news. It's already a poor experience, you know...Jet Blue is cool. I'm almost looking like is Sir Freddy Laker still alive, I mean can he make a second shot at this. I understand it's survival within the industry, it's been a terrible business, a terrible industry, but as a flyer, I cringed when I heard the news.

Charlie Gasparino: They have to do this...OK yeah, what's the solution? We all know prices are going up. This is a lousy industry. Listen, if the barriers to entry are too high, that's what we have to address. We're sitting around talking about pricing all the time, that's nice, we know we're gonna get screwed. But ya know, this is an industry that's doing this stuff for a reason because of pricing, because of costs. Listen, I know banking, I'm not an expert at this, but I know a little bit about it. There's a barrier to entry for smaller banks. Bigger survives because of Dodd Frank because of Basil 3 and all this stuff. But in any event, there are barriers to entry to be an investment banker right now. You can't...it's very hard to have diversification. Are there barriers to entry in the airline industry and if there is, let's address it.

Adam Lashinsky: Well over the past 30 years, airline prices came down dramatically after deregulation. It got really inexpensive to fly, and guess what...the airlines didn't make any money, so of course prices are gonna go up. I also think that small airlines will start up where routes aren't being served well. They'll offer cheap prices, they'll succeed, some will fail. You know, this thing has a cycle to it.

Charles Payne: Man you get something like, with some gravy on it, what are you going to put it in? Paper! I hope you don't plan to travel far to go. I don't think Mayor Bloomberg understands regular people. All these little small style stores in the Bronx and in the city that just the inventory alone could break their backs, but it's just nuts, it's just too imperial to me.

Adam Lashinsky: Well 20 years ago, I covered the story when McDonald's did away with the polystyrene clamshell. They went to a product that was not as good...it didn't keep the burgers as hot, but they and their customers survived, and I suspect you New Yorkers will survive this ban as well.

Gerri Willis: There is a money angle here my friends that we are missing. In the House, they banned Styrofoam...their costs went through the roof...it's gonna cost more. These people can't afford it, these little bodegas out here on 6th Ave. and on 48th and 47th, they can't afford to make this change, it's ridiculous.

Charlie Gasparino: I supported his soft drink move because we have socialized medicine in New York, and if you're gonna have socialized medicine, you do get to control what poison people put in their body. But, it does seem like he gets caught up in these sort of nanny-state issues like for example, it's his way or the highway. We're gonna have the New York City Marathon, we're gonna have runners run through Staten Island, which was devastated like a 3rd world nation, but he didn't care. And this seems to be, it just goes way too far. I actually like the mayor, brilliant guy who's a very good mayor, but he's just too cute by a half.

Charles Payne: Like Aruba Networks, BYOD, you'll learn that pretty soon, bring your own device. Every business is gonna say I don't care if you got an iPhone, a Blackberry, whatever...bring it we'll have a system so you can use it even within our firewalls. This company makes that possible. Green Mountain Coffee, everyone knows a company that's sure to hate it. I don't know why, they're still taking market-share, Starbucks rival, which didn't do so well. I like this major breakout through the 15th. And finally, First Solar, how I learned to love the bomb, no I hate the way the government is doing this, but I accept that for the next four years, they're gonna pile so much money into this area, this stock probably takes off big time.

Adam Lashinsky: Well I don't like going against Charles when it comes to stock picking any of the time, but the one that I love the most, Charles, it First Solar, because I know you hate Solar and I think Solar is a great idea, but this company loses money and gets beaten up by the Chinese...I would stay away from that.