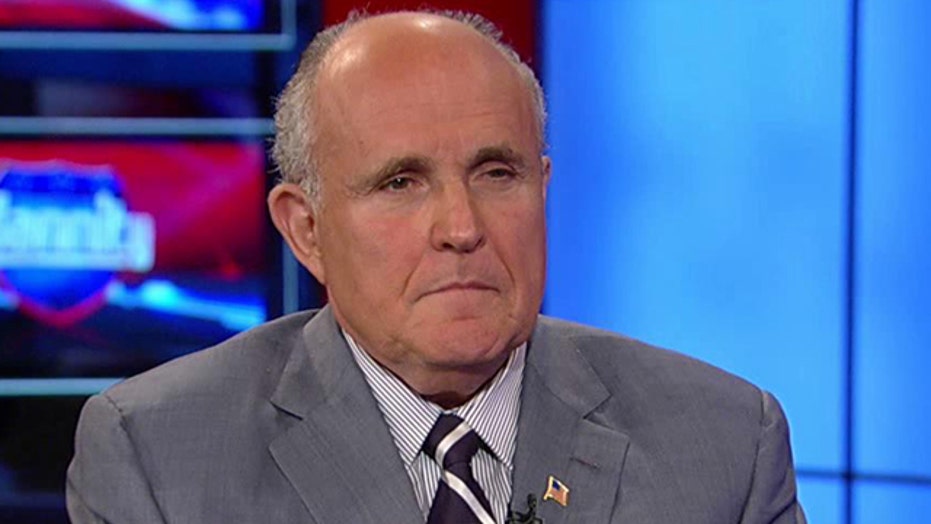 This is a rush transcript from "Hannity," September 16, 2013. This copy may not be in its final form and may be updated.

I don't know what to make of this. I worry when I hear how tough the security is at a place like this, but yet he was able to get an AR-15 and other weapons on location.

HANNITY: Military personnel themselves are not allowed to carry.

GIULIANI: That's why it's absurd because in that sense, internally it is not a well defendant defended facility. You get past the checkpoint, these people are all defenseless.

HANNITY: What do you think of what KT was saying that we have 4 million people now -- it's become such big bureaucracy -- that have security clearance.

GIULIANI: Well, I think she's absolutely right. I mean, that number is impossible to vet accurately for the purpose of keeping the information secure. It becomes even more impossible to vet if you are going to let them have access based on the security clearance and let them not have their items checked when they come in.

HANNITY: Not anymore? Not lately?

GIULIANI: A while back. I go with police officers and security people. They have to check their weapons. They all get checked out.

HANNITY: They are not allowed in any of those buildings --

GIULIANI: So first of all, we have too many people with security clearances. At 4 million it's impossible to vet accurately. Snowden certainly demonstrates that. But if we are carrying over the security clearance to allow people to bring in weapons then we are really making a terrible mistake.

HANNITY: There is something deeper here. We'll find out as more information comes out. The first thing they said, Homeland Security, it's almost like they raced out there said, it's not terror. It's not terror. Fair enough. They said they have no reason to believe it's terror, but they haven't ruled it out. They said it in the 4:00 briefing. Why in my mind do I think that ought to be the first thing they think of? Not be so quick to rule it out. I think the opposite way.

GIULIANI: I think the honest answer right now is they don't know. If you look at the facts that we have available, which are very few really, it doesn't look like terrorism. But I don't know that I would make the conclusion now. What I would say if I were in charge of this investigation is it's too early to come to a conclusion. You might get a big surprise, who knows. You look like there is a fool if there is a big surprise.

HANNITY: In this case for the one thing, it could be a disgruntled employee. He served in the Navy.

HANNITY: It could be hatred of the military for whatever reason.

HANNITY: That may bring it close to the line of terror, but we don't know.

GIULIANI: And a person who clearly displayed anger, rage in the past, using his weapon inappropriately. I'm surprised he wasn't dealt with more seriously for the shooting that occurred in Fort Worth.

HANNITY: Yes. Apparently, he was dispensed. I mean, you shoot a gun and it goes through your neighbor's ceiling?

GIULIANI: I used to get criticized and accused of zero tolerance when I was the mayor for treating some of these smaller things very seriously. We once prevented a serial killing by enforcing the rule that you got arrested if you didn't pay your tolls when you went on the subway. We caught a serial killer that way.

HANNITY: Did you really?

GIULIANI: Yes. I mean, when people commit these violations, I'm not saying you have to put them in jail for a long periods of time. But you have to register it as a serious thing so that maybe it becomes a cause to take away the security clearance.

HANNITY: Look, I have had a license to carry all of my adult life. I've had one in Rhode Island, New York, California, Alabama and Georgia, a carry permit, pistol carry permit. You don't have an accidental discharge of a weapon. You don't.

GIULIANI: I looked this up right away even before the press had this. I got his record. He shot into a woman's home.

HANNITY: Because he was angry at the noise she was making. That's the way I interpreted it. He still got off with that.

GIULIANI: Here's what happens I think. You get arrested and go to jail for that.

HANNITY: You would think.

GIULIANI: Second, your security clearance is taken from you.

GIULIANI: I don't think they ever found out about it.

HANNITY: Listen, we lost 12 people's lives today, people, you know, literally fighting for their lives in a hospital.

GIULIANI: Now, who knows? Maybe he could have done it anyway. We might have given ourselves a chance to avoid this if this had been dealt with seriously and also if that information had been conveyed and the security clearance have been taken away.

HANNITY: All right, Mr. Mayor, always appreciate your insight. Good to see you.

HANNITY: You've lost your voice in the Giants game?

GIULIANI: I think so.

HANNITY: The Manning Bowl? Peyton was pretty good. I'm an Eli fan, too, but...

HANNITY: Boy, it's a tough start.

HANNITY: Very optimistic, you predicting the Yankees in the World Series too this year?

GIULIANI: Until they are eliminated.