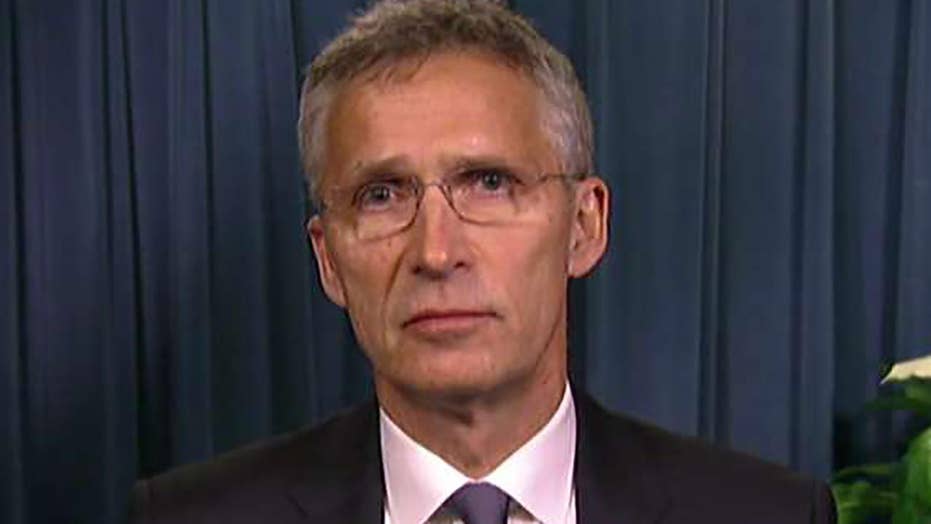 NATO Secretary General Jens Stoltenberg has insight on his White House meeting with President Trump and credits the president for increase in defense spending among NATO allies.

This is a rush transcript from "Your World," May 17, 2018. This copy may not be in its final form and may be updated.

JENS STOLTENBERG, NATO SECRETARY GENERAL: All allies are increasing their defense budgets. And...

DONALD TRUMP, PRESIDENT OF THE UNITED STATES: Do you give me credit for that?

STOLTENBERG: You have helped do that, because your leadership has been important and it has had a great impact.

NEIL CAVUTO, HOST: All right, NATO Secretary-General Jens Stoltenberg thanking President Trump, as allies do increase their spending and defense commitment, not leaving the onus exclusively with the United States.

The president indicating that Germany needs to do more.

Anyway, in his first interview since meeting the president, I'm happy to introduce the NATO secretary-general himself, Jens Stoltenberg, joining me now.

Sir, thank you for taking the time.

STOLTENBERG: Thank you for having me.

CAVUTO: How did it go today with the president?

STOLTENBERG: It was a good meeting.

And we addressed a wide range of issues. But the main focus was on defense spending and the importance of that all allies meet their pledges or do what they promised to do.

CAVUTO: Now, I noticed that Germany was singled out by the president as not sharing -- or doing its share.

He didn't mention France, but it wasn't, I don't believe, sir, at that 2 percent level. What do you do in that case?

STOLTENBERG: Well, what we do is that we are working with all allies to make sure that we implement to do what we promised.

And we are moving in the right direction. Germany has also started to increase defense spending. Only last year, they increased the defense budgets by around 6 percent in real terms.

So, all allies are doing more, but we expect them to further -- to step further up, do more.

CAVUTO: Given the increased defense spending on every country's part -- I believe every country has at least done more than it was doing a year or certainly two years ago at this time -- it does raise concerns whether NATO is preparing for something. Is it?

STOLTENBERG: We are responding to a more unpredictable and uncertain security environment.

We see more certainly Russia in the east. We see all the turmoil, the violence in Iraq, Syria, to the south of the alliance. And that's why NATO is implementing the biggest reinforcement to our collective defense since the end of the Cold War, both spending more, but also doing more in the fight against terrorism.

And I commended President Trump today for his leadership. And it's clearly having an impact, because all allies are now moving in the right direction.

We don't want a new Cold War. We don't want a new arms race. Therefore, we continue to pursue what we call the dual-track approach to Russia, meaning deterrence, defense. We have to be firm and strong, but at the same time, we have to work for a political dialogue with Russia to try to improve our relationship with Russia.

CAVUTO: If I could touch on the North Korean talks that are coming up next month, General, the president seemed to intimate here that maybe a reason for the North Korean leader's apparent about-face or tougher posture is because he met with the Chinese leader, second time in as many months, and it was sort of reined in a little bit.

Do you buy that?

STOLTENBERG: Well, so my main message today was that all NATO allies, NATO supports the efforts of President Trump to find a peaceful negotiated solution to the crisis in North Korea. And, therefore, we also hope that there will be a successful summit.

And we welcome the progress we have seen over the last months. Having said that, I think it's important to keep up the pressure on North Korea, the diplomatic pressure, the economic -- the political pressure, but not least the economic pressure, because we have to make sure that we reach a solution which leads to the complete denuclearization of the Korean Peninsula, and also that North Korea stop developing nuclear weapons and stop developing their ballistic missiles.

CAVUTO: I guess there are different definitions of denuclearization, General.

And, obviously, the North Koreans harbor a different sort of a view on that than do we. If it looks like the two sides are far apart on that issue, the president has indicated that he would just walk away from the talks.

What would you think of that, if he did?

STOLTENBERG: I think the important thing now is to be focused and support the efforts to find a negotiated solution.

And, therefore, we all hope that it's possible to have a summit and have a meaningful summit with some real outcome. To achieve that, we need to maintain the pressure on North Korea.

So, therefore, NATO supports both the initiative to have a summit, to have a dialogue with North Korea, but at the same time to maintain the pressure on North Korea.

And I think it would be wrong to speculate what will happen if we don't succeed. I think the main focus should be on a successful summit with real some progress and some real outcome.

CAVUTO: The reason why I mentioned it, sir, is that this was a 180 on the part of the North Koreans, going into what looked like a promising start to the talks with the release of hostages, the commitment to decrease nuclear activity, and now this.

And I'm just wondering, as someone who has -- obviously has a vested interest in the outcome of this, do you trust the North Koreans?

STOLTENBERG: I think it's important to be aware of that we have seen before that they have not delivered what they have promised.

Therefore, I'm absolutely certain that any deal, we need to have mechanisms for verification and control. But I think it's a bit early now to go into the details of a potential deal.

The important thing for me, as secretary-general of NATO, is to support efforts to have a summit, to make progress, and then to negotiate a deal. And a deal needs systems, mechanisms for verification, for control, to make sure that North Korea is delivering what they promise.

CAVUTO: Sir, you have been very patient.

Just one question on Vladimir Putin and how quiet he's been, hasn't said or done much since he was inaugurated for the fourth time. Does he worry you? Does the silence worry you?

STOLTENBERG: What we have seen over the last year is a more assertive Russia, a Russia which has invested heavily in new and more modern military capabilities, which has increased its military presence into the Middle East, Syria, but also a Russia which has been willing to use military force against neighbors, Ukraine, illegally annexing Crimea.

And that is the reason why NATO now is implementing the biggest reinforcement to our collective defense since the end of the Cold War, why NATO is increasing our military presence in the eastern part of the alliance to send a clear message to any potential adversary, that if one ally is attacked, that will trigger a response from the whole alliance.

And this is what we call deterrence. And that's the best way to prevent the war.

STOLTENBERG: As long as we're strong and united, there's no adversary that will try to attack a NATO ally.