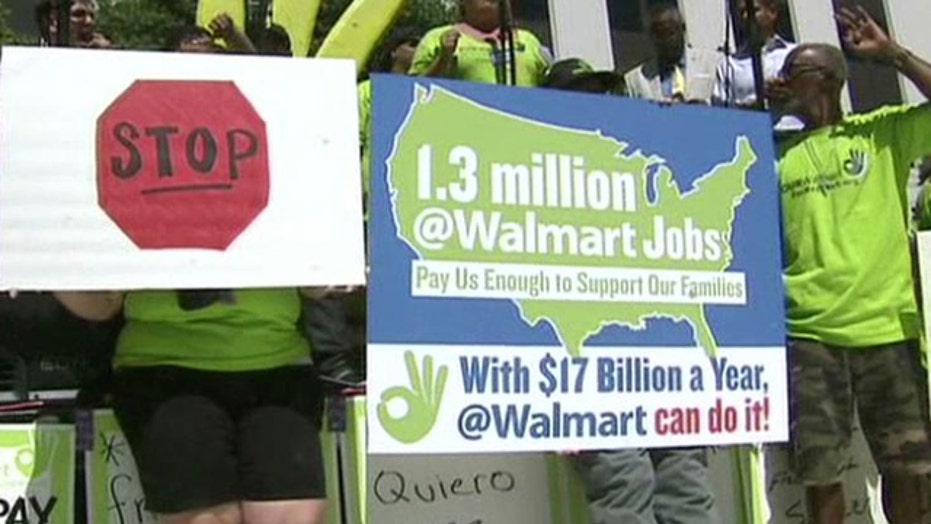 CHARLES PAYNE: Most of those protesters weren't Walmart workers. When a Walmart opens up, there are typically about 20-40 people in line for each job, it's the same thing with McDonald's. A few years ago, there were about 100 people lining up for each McDonald's job. They're getting more and more desperate, and at the same time more and more transparent.

BEN STEIN: I'm probably the only one here that shops at Walmart. They have a very hard job; I don't think they're paid enough. However, that is a matter for the free market; it is not a matter for demonstrations.

DAGEN MCDOWELL: I shop at Walmart as well. Walmart is the whale for the unions. They have a private sector union membership that is under 7 percent of the workforce and membership is declining. They will constantly go after Walmart, but that will cost a few things: the loss of jobs and prices will go higher for the very people that unions say they are trying to help. It is not good news for this country.

CHARLIE GASPARINO: These protests seem pretty mild. My dad used to let me play hokey and let me go to really good strikes here in New York. I think they're playing with fire in this economy. This isn't a great economy. People on the low end are lucky to have jobs. We aren't producing that many jobs right now; it is a very slow growing economy. They could be protesting their way out of a job.

CHARLES PAYNE: When I listened to Obama Friday morning, it seemed to me that he already made up his mind. He said he was going to explain to America why he is going to take the action that he's going to take. To me it means that he is going to go with or without everyone else. It's his military, his conviction, and his constituents. I think he boxed himself into a corner.

DAGEN MCDOWELL: If you think the President looked weak saying chemical weapons were a red line and then backtracking, think again. He went in front of the American people on Tuesday, he then lets Congress vote on it, if they vote against it and he still goes in, we will have a situation. If that is the way it plays out, it will not be good.

ADAM LASHINSKY: I think the President is damned if he does, and damned if he doesn't. I'm not too interested in wordplay. I think he is doing his best with consulting Congress, but ultimately being Commander-in-Chief.

CHARLIE GASPARINO: When you telegraph something, the effectiveness is obliterated. It looks like he doesn't know what he is doing.

CHARLIE GASPARINO: Their behavior was despicable. In the government's defense, there were some problematic emails on S&P's part. If you have to make a case, you need evidence of intent. You can't make a case solely based on emails.

CHARLES PAYNE: Congratulations S&P, you finally said what everyone else knew. You were targeted because you embarrassed this administration. It is a stain on Obama's resume forever. The White House will never forgive them.

DAGEN MCDOWELL: I was never a conspiracy theorist, but given what we've seen over the last year with this administration, doesn't it make you want to question everything this administration does? Whether you talk about the Justice Department going after James Rosen, the IRS scandal, the NSA, everything. You have to hold your nose with this one now.

BEN STEIN: To the administration and to Eric Holder, whom I think of as the Minister of Fear, the lawsuit is the brass knuckles of what the Chicago Mafia would have done. Anytime anyone does anything they don't like, wham! They hit them with a lawsuit. The government has a lot of lawyers; they have a lot of time on their hands. I believe all the rating agencies are screwed up, but I also believe that it is extremely interesting that this is the one they chose to go after. You can't lift a finger against Obama without worrying about getting sued.

ADAM LASHINSKY: I think this is an outrageously silly thesis to suggest that the President of the United States or the Secretary of the Treasury would say to the Attorney General, "Hey! Let's go sue these guys." And Ben, why them? It's S&P!