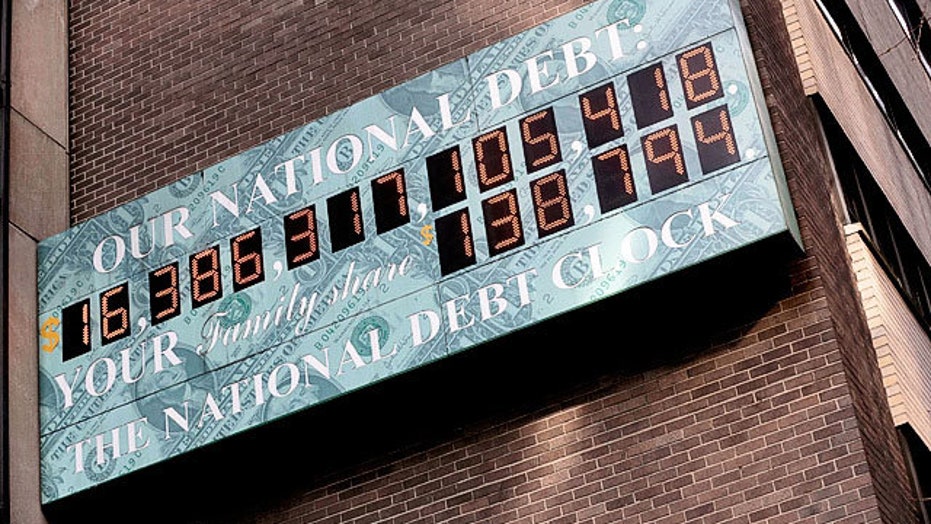 CHARLES PAYNE: I think he's legitimately got a point. Overspending can wreck people, businesses and countries. Ask Rome what happened over there. When your money is going to pay off the interest on a gazillion dollars in debt, it takes away from every aspect that made you great in the first place.

CHARLIE GASPARINO: A couple caveats here. I don't know where Mr. Mullen got his PhD in economics, that's one. Number two, is he talking about how much we spend on the military? That eats up a lot of our budget. That's a lot of spending; we borrow a lot of money for that because we have a huge military presence around the world. Abraham Lincoln said it: if we will fall apart, we're going to fall apart from within. No one is going to take us over.

DAGEN MCDOWELL: With so much debt, you lose both political flexibility and military flexible. China has enormous leverage over us because they're the number one foreign holder of our debt. We won't act potentially as we should, whether it's militarily or even economically with China because we need them to buy our debt.

ADAM LASHINSKY: Well, they have our debt, we have their money. It's a pretty even balance there. They do thought want to jeopardize their investment in the United States. It's a separate subject.

BEN STEIN: I don't think Admiral Mullen has any training in economics whatsoever. That's one. Two, there has never been an example in the entire history of mankind of a large civilization that went under because of its debt. Three, if the debt is excessive, one solution is to tax more, not to spend less. Our military force, while not as strong as they were a few years ago, our entire military is equal to the entire military forces of the rest of the world, and we spend as much in the U.S. with 5% of the population as the entire rest of the world.

CHARLES PAYNE: They're blaming global prosperity, too. Now these countries are getting to a position where they can afford this stuff, shame on America for selling it to them! Oh, you want a Harley-Davidson in Brazil? You want a whirlpool washer and dryer in Argentina? America, shame on you for selling it to them! This is all a part of the whole redistribution of money thing. That's all it is, another guilt trip.

DAGEN MCDOWELL: China is the biggest emitter in the world of greenhouse gases. These nations need to get near missions in check. China working with the U.S. trying to implement some vehicle emissions standards, but instead this report blames us for buying the products that are made in China. They're blaming us for buying smart phones and clothing and the like.

CHARLIE GASPARINO: Most prosperous countries have a better handle on their environment than third world countries where they pollute everything and people live in squalor.

BEN STEIN: This is consistent with their lifetime pattern ever since the U.S. lost control in the 1960s. We produce more pollution per person because we produce more of everything per person, but China is the world's number one culprit. Nobody is yelling at them. It's just another case of blame the rich guy and blame America just because we are free and rich. They hate us because we are free and rich. They are jealous.

ADAM LASHINSKY: It's one planet. We are all responsible for that one planet. You can deny all this stuff all you want. That's what you are doing instead of having an intelligent conversation about it.

CHARLES PAYNE: This is a hallmark of the administration. It's been all about intimidation, and actually following through on that intimidation. So it's interesting that this is coming out now.

CHARLIE GASPARINO: I have zero sympathy for S&P. They deserved to be charged. I looked at the evidence. The e-mails at S&P showed more intent than Moody's and Fitch. Everybody I know in government that gets downgraded complains to the rating agencies. Tim Geithner may be an idiot, but he is not a thug.

DAGEN MCDOWELL: Based on this affidavit, he did threaten S&P. Subtly, smartly, so he wouldn't get in trouble for it, but he made a threat.

BEN STEIN: Government officials are human. When they are threatened, they threaten back. This is standard practice.

ADAM LASHINSKY: It's not just government borrowers that complain. Every borrower complains, corporations, too if they don't like the rating.