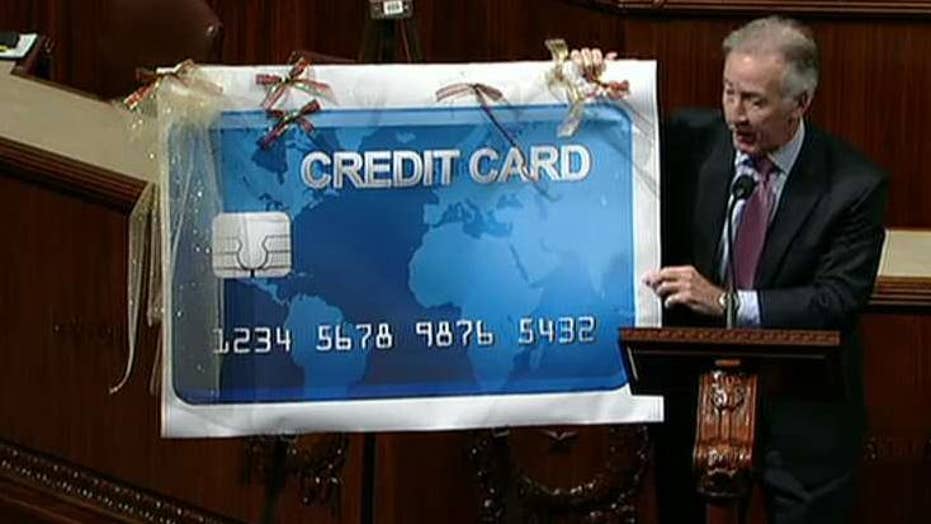 Gary B. Smith: The debt is forecasted to be over the next few years $88 trillion. It's inescapable: $0.92 of every dollar the government takes in they spend on entitlement programs: Social Security, Medicare and Medicaid plus interest. Those are forecasted to increase over the next few years: social security 62 percent, Medicare 73 percent Medicaid, 45 percent. The problem is not tax cuts. It's not tax revenues. The problem that we have this big entitlement program monolith increasing over the next 10 years, if you include state and local spending, the government total-federal, state and local- will spend half of everything we produce. That's the problem.

Hadley Heath Manning: I'm glad to see Democrats who are concerned about deficits and concerned about the national debt. This shouldn't be a partisan issue and I hope that Republicans will take the mantel of fiscal conservatism on in 2018 and that they will address many of our entitlement problems, our spending problems because we have a national debt and we have deficits year-over-year not because Americans are taxed too little but because Washington spends too much, so cutting spending has to be a priority.

John Layfield: Democrats have been nowhere since 2000 when the debt doubled under President Bush and doubling under President Obama and the only thing that is bipartisan in DC is incompetence. We're talking about having $32 trillion in a federal deficit in 10 years and all they're arguing about is this $1.5 trillion you're ignoring 96 percent of the debt that is going to be out there. This is simply covering up years and years of mismanagement of this country's finances and understand this: $32 trillion if you have a normal interest rate we're going to pay $1.6 trillion in only 10 years on debt interest alone. We'll have no money for anything but entitlements and deficit spending nothing else.

Chuck Rocha: What's interesting in Washington D.C., if you've got a lobbyist or a team of lobbyists this tax bill is pretty good for you because your lobbyists have been working hard for you. I've spent this whole week in south Florida and the rates on our national parks have gone up because the national parks don't have any money but we have enough money to give all these tax cuts to these corporations. Now if it stimulates the economy I'll be the first one to jump on the stool and talk about it as a small businessman but I think we can walk and chew gum at the same time and we should be doing things that helps everybody instead of just a few.

Hadley Heath Manning: Yeah, saying something over and over again doesn't make it true but it does make it seem more important to members of the public who are listening and in media we learned there are various ways to bias a story. You can choose different words or have a different tone but you also show your media bias or bias as a lawmaker by choosing which stories to highlight and I'm afraid really what's behind this ultimately is the fact that many in the media don't want to talk about the fact that many corporations raise wages this week, offered Christmas bonuses because the tax reform is going to be very successful in helping the American middle income workers and I don't think they want to talk about President Trump's successful first year in office and his deregulation agenda so why not continue to talk about Mueller and speculate there.

Chuck Rocha: I work in this business and we know that's good for ratings. It's good for their audience. It's one of the ugly things about Washington DC, we're so hyper-partisan on the far right or far left with the media. If something has gone on here let's have a full investigation and you should be covering the news and that is news and that's what makes us different. We have a free and open media and we should be talking about what matters and this may matter, it may not but let's do it in a truthful way.

Gary B. Smith: Chuck said we have a free and open media. We don't. We have a media that is actively rooting against Trump. Do you know why they keep bringing up he's going to fire Mueller? They want him to fail. They still cannot get over that he won. Do you know why? So the Washington Post can run a headline that says President Trump fires only man that could bring him to justice. They're rooting for the demise of him and rooting in effect for the demise of America. I think it's despicable. They're anything but partisan that changed years ago.

Jonas Max Ferris: Because there's enough real news and real reporting to be done on the story that you don't get to just do what you want to happen or what sounds like is going to happen. The whole thing vaguely reminds me of the article about Obama not being born in America. It's like it's doing the same thing to criticize the other side of doing as far as Trump having a massacre like Nixon and fire everybody- the same media that thinks they can do that says he watches TV all Saturday night so he won't do both so it's not going to happen so it's not real articles or real research just reproducing stories. It's kind of lousy journalism that got him elected in the first place.

Hadley Heath Manning: It sets a terrible example. We need to reclaim the art all of us as Americans of agreeing to disagree when someone is saying something that you disagree with. I don't think Ivanka Trump's speech there was particularly political, but let's say it was. Someone is saying something that you disagree with the answer is not to plug up your ears and refuse to listen but to have an exchange of ideas and learn from one another. This is the opposite of what we should be teaching school age children. We can't expect them to grow up and be college students and have an open mind.

Gary B. Smith: I grew up in the time when I was in elementary school that John F. Kennedy was president. If John F. Kennedy came or Robert Kennedy or any of the Kennedy kids came to our school it would have been thrilling because it was the president of the United States, or the president's family. As far as the college kids I'm afraid that ship has already sailed. My daughter is fairly liberal. I'm sure that if Trump or his family came she might have walked out, that's sad. Maybe that's bad parenting and I think maybe that's the case here in this Norwalk school, bad parenting.

Jonas Max Ferris: Michelle Obama had the same problem and she was talking about school lunch. Ivanka Trump is not Steve Bannon and even if Steve Bannon was speaking at your school you're supposed to expose your kids to different viewpoints doesn't-mean they're being brain washed in one hour from one person. Just let it happen, that's what school is all about it's not a big deal. Ivanka Trump is not the enemy and neither was Michelle Obama.

Chuck Rocha: These people have the right to do whatever they want to do with their kids. That's the greatest thing you can control, the only control you have over their kids is when they are little so you can explain to them whatever you want to explain to them that you own them for just a little bit- enjoy that.

John Layfield: The outrage is wrong here. You're mad because your guy didn't get elected president so you pull your kid out of school? Forget the fact that America right now according to the latest Pew research is 38 out of 71 developed countries in math and science our education system is overall is failing our kids and you're mad about the president's daughter visiting your school? Give me a break.

John Layfield: Facebook is the perfect gift! (FB) rises 20 percent by next Christmas

Jonas Max Ferris: Keeping you healthy and wealthy (PG) up 15 percent by next winter