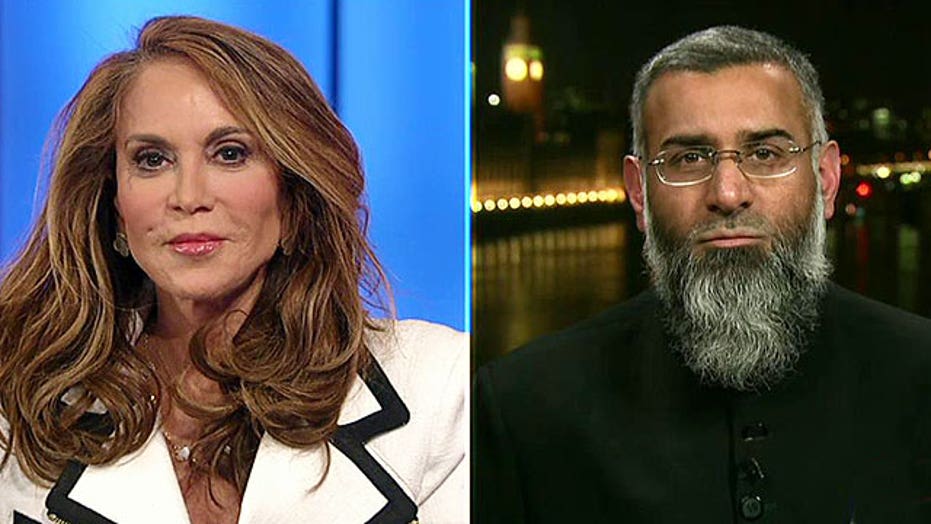 This is a rush transcript from "Hannity," May 6, 2015. This copy may not be in its final form and may be updated.

SEAN HANNITY, HOST: Radical jihadists tonight are calling for the head of Texas free speech event organizer Pamela Geller. A chilling on-line post reportedly written by an American jihadist warns that Geller cannot hide and that she will be killed for daring to hold a cartoon contest.

Now, the post also claims that ISIS has trained over 70 fighters in 15 states right here in America who are ready to react. And anyway, joining us now to respond to these new threats against her life, Pam Geller. Also with us, radical London imam -- and that's Anjem Choudary is back with us.

Pam, before I get to your side of the story, I want to remind people about Anjem. He's been on the program before.

You want worldwide sharia, is that correct?

ANJEM CHOUDARY, LONDON IMAM: Of course. Yes. We believe that the whole world should be governed by divine law.

HANNITY: And you support the idea that women can't drive, correct?

CHOUDARY: That's a Saudi rule. Although women can drive, it's up to the head of the Islamic State (ph) to decide...

CHOUDARY: ... how the rules of segregation should be applied.

HANNITY: ... Muslims that leave their religion, apostates, should be killed.

CHOUDARY: Well, of course. The Prophet said whoever changes (ph), then kill him. So this is the (INAUDIBLE)

HANNITY: All right, and gays and lesbians should be killed. I'm just reminding my audience of your -- and gays a lesbians, the penalty for that is death, correct?

CHOUDARY: You know, if they do that publicly and there are witnesses, it does carry capital punishment, yes, sir.

HANNITY: OK. Now, let me go to you, Pam. This is a serious threat.  Basically, a fatwa, a death threat, has now been issued. Your reaction to that? Have you had any contact with the FBI?

PAMELA GELLER, PAMELAGELLER.COM: They have not contacted me, but of course, we've now increased my team. I have a team now, private security.  And NYPD counterterror has been in touch with me.

HANNITY: In touch with you.

HANNITY: Did you reach out to the FBI?

GELLER: No. And this is interesting because this is a terrorist threat. And the FBI, President Obama should provide security. There's just no question about it because he created an environment that raised the stakes on this.

If you recall, I had a free speech contest on September 11 of 2012. I had Lars Vilks, a cartoonist there. It was for freedom of speech. And the fact is, nobody tried to -- nobody -- nobody tried to attack it. Nobody reported on it. But that same day, the Cairo embassy was attacked.  Benghazi was attacked. They flew the flag of jihad on top of the Cairo embassy and our U.S. embassy apologized!

GELLER: They apologized for...

CHOUDARY: Let's be absolutely clear. We're not talking about Mickey Mouse or Donald Duck. You're talking about people who deliberately had a competition to insult the messenger...

HANNITY: You support the death penalty for Pam Geller...

HANNITY: ... who doesn't -- who's not -- is not Muslim. You support the death penalty because she had a cartoon contest. Is that how -- is that how frail you are in your faith that you feel so insecure that you cannot...

CHOUDARY: You know, it's not about it.

CHOUDARY: It's not about it, it's about the divine law.

CHOUDARY: Whoever insults the messenger...

HANNITY: ... a cartoon being drawn about him?

HANNITY: You support the death threat. You want to kill her!

HANNITY: You want her to die!

CHOUDARY: You know what? She should be put before a Sharia court and tried and...

HANNITY: She's not a Muslim!

CHOUDARY: ... of course, she will face capital punishment.

CHOUDARY: She should have thought of that before...

HANNITY: You want to oppress her over a cartoon!

CHOUDARY: ... and Salman Rushdie and Hirsi Ali. You cannot continue to go down this road and expect the Muslims to stand back. You know, I would retaliate if somebody insulted my own mother, let alone the Prophet, who I adhere, and you know, I love a hundred times more than my own family.

HANNITY: So if anybody says anything...

CHOUDARY: ... if someone attacked his mother. What about the Prophet?

HANNITY: If somebody says something about your prophet that you don't like, you want them dead!

CHOUDARY: (INAUDIBLE) that about Jesus or Moses or Abraham or...

HANNITY: I didn't anybody...

HANNITY: ... a crucifix submerged in urine, and I didn't hear you or any other Muslim say that this person ought to get the death penalty, Andres Serrano. There was an elephant dung thrown on a picture of the Virgin Mary.

HANNITY: I didn't hear you or any other Muslim...

CHOUDARY: Let me tell you something...

HANNITY: ... condemn that or threaten death there!

CHOUDARY: In this country, they depicted (INAUDIBLE) Jesus as a homosexual. That was Corpus Christie...

HANNITY: And you support the death of them, too.

CHOUDARY: ... and we had a demonstration. And Christians were coming to us and saying, you know, We should have been out there.

CHOUDARY: So we always raise our voice, no matter which prophet of Allah, you know, has been attacked. And what I would say to you...

CHOUDARY: ... instead of insulting the prophets, why don't you follow them? Why don't you abide by what they say?

HANNITY: Because they don't agree with you!

HANNITY: We don't live under your oppressive sharia law!

CHOUDARY: You will do one day, Sean...

GELLER: Here's the key and critical difference. Canon law pertains to Catholics. Jewish law pertains only to Jews. But the sharia, which is a -- dictates every basic aspect of human life, asserts its authority...

That fact is, in that fatwa that was issued against me -- my name is preceded by "conzeir (ph)." Now, conzeir means pig. It's the word Mohammed used before he slaughtered how many -- I should -- beheaded hundreds of Jews. So to first say to the liberal media that this is not religious is absurd and obscene on its face!

GELLER: Of course they wouldn't! I submit to you that...

GELLER: No, I'm talking, sir. I know you're used to stepping over women, but you're not going to have it here, OK? My conference saved lives because I understand the threat and we had enormous protection, and the Garland police were superb.

GELLER: Or -- that conference saved lives, and shame on the cowardly media!

HANNITY: All right, let's go back to the imam. Go ahead.

CHOUDARY: Pamela, first of all, the word "conzier" I think is too good for you in the first place, you know? A least a conzier worships Allah. The fact is that you insulted the Prophet Mohammed (INAUDIBLE) and obviously, you knew the consequences. Otherwise, you wouldn't have...

GELLER: What do you mean I knew the consequences? I live in America!

GELLER: I live in America!

GELLER: There are no consequences!

CHOUDARY: The United States of America are the champions of murdering innocent people!

GELLER: The champions of freedom, sir!

GELLER: You can't take it. Look how you want to kill people.

CHOUDARY: They are the ones who killed up to a million people...

CHOUDARY: ... in Iraq and Afghanistan...

CHOUDARY: ... Americans and others insult...

Is this the prophet that you praise so much? Is that -- is that Islam to you?

CHOUDARY: Nobody is being raped!

HANNITY: I have the images...

CHOUDARY: No women are being killed...

HANNITY: ... of Coptic Christians on a beach...

HANNITY: ... beheaded in the name of Allah!

HANNITY: So if you disagree with pornography, you're going to cut somebody's head off?

HANNITY: And you rape young girls and kidnap young girls in the name of Boko Haram and...

HANNITY: Excuse me! Those girls got...

HANNITY: Nigeria -- excuse me! They're pregnant! And they were raped after they were kidnapped and taken away from...

CHOUDARY: ... -the Nigerian regime by Badluck (sic), you know, Jonathan, and his own successor, not by the Muslims.

CHOUDARY: We are the ones who are defending ourselves...

CHOUDARY: We defend ourselves in Syria and Iraq and Chechnya...

HANNITY: You're evil and pathetic.

HANNITY: All right, we got to go.

CHOUDARY: We are defending ourselves. Sean, wake up!

HANNITY: Thank you. Pam, we'll give you the last word.

HANNITY: Excuse me. You have to be quiet. There's another person here.

GELLER: Roman Catholics don't like when their religion is mocked, but no one talks about provoking them. Christians don't like it. Jews don't like it. But this is what it takes to live in a pluralistic society. You have the right to offend and be offended.

HANNITY: You know, every time I put Anjem on -- let me tell you something. People will complain that we put him on. This is the problem.  He believes this.

GELLER: A lot of people do.

HANNITY: And a lot of people believe this! And there's a lot of terror in the name of Islam, in the name of the prophet that is happening.  And you know what? People ought not get killed over a cartoon! And that's what's happening.

HANNITY: In that sense, it's almost condescending that we would expect less.

HANNITY: Well, said. All right, I got to break. Thank you.  Appreciate it. And I hope you stay safe.