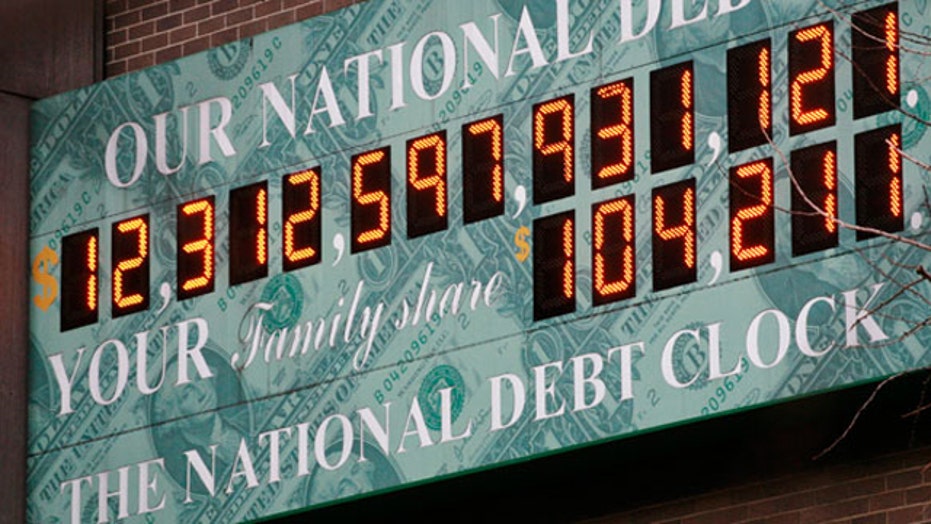 IN FOCUS: Senator Jim Inhofe says we cannot afford to go to war with Syria, due to cuts to defense in the sequester; proof our National debt is becoming a security risk?

RICH KARLGAARD: It would be difficult to follow the Powell doctrine today; Colin Powell said we should have the sufficient resources to fight two major wars at the same time in different parts of the world. We can't do that today. We should be investing 6 percent of our GDP in our defense, as we did during the Reagan years. We can't afford to do that because we are so far behind on the debt issue.

JOHN TAMNY: We spend more than the top 10 countries behind us combined on defense. If there is a national security issue here it's the fact that we defend some of the richest countries and regions in the world without defending the United States. If you look at the deficit more broadly, if anything it makes us safer. China is far less likely to want to bomb us if we owe them money than if we don't owe them money.

STEVE FORBES: Inhofe is right about the long-term implications on what we are doing on the budget. It's not just the level of the deficit or the level of the national debt. It's the fact that this president wants to draw down our military rather than building it up. Even though we have a large budget on paper, a lot of that goes towards personnel and things you don't see in other budgets. China is spending very heavily, even though it's not all out on the open. We have very volatile areas in the world, particularly on Asia, we are focused on the Middle East, but your pan in china, it's heating up and I don't want to have Japan feel that it has to have nuclear arms because we can't defend them.

RICK UNGAR: I can certainly go along with the dangers that come along with the national debt but I have a very hard time buying that security is one of them. Yesterday we sent another warship to the Persian Gulf; this is just not a problem. Other things may go if we find ourselves challenged in our national security but we have all the money we need. I couldn't disagree with Senator Inhofe more. It's just fear mongering, it's not an issue.

ELIZABETH MACDONALD: China and Russia can make our lives miserable by dumping treasuries. They can move interest rates higher in our country, the central bankers are looking at some serious research that is finding that the dumping of treasuries can move the 10-year yield higher and our loan rates higher because the foreign governments own so much of our debt.

SABRINA SCHAEFFER: He realizes that our national debt is over $1 trillion, 3 times larger than what it was under George W. Bush, 18 times larger than it was under President Clinton and I don't support going into Syria in a military invasion but we do need to have the financial and political flexibility to tackle whether it's a foreign entanglement, environmental calamity, a health scare, and drowning under the tsunami of debt doesn't allow us to protect ourselves.

NSA officers caught spying on their love interests and the United Nations: proof the NSA cannot be trusted?

ELIZABETH MACDONALD: I get that we want to stop the next 9-11, I get that we don't want to sacrifice security by making the NSA more transparent, but if they are violating privacy by invading regular Americans every year for the last 10 years I'm worried they are storing email information and phone call information. Friends of mine in Germany and Venezuela are saying little by little we are accepting little compromises day to day, and they say oh it's just the government, it won't bother us and all of a sudden the government was at their backdoor.

JOHN TAMNY: These are not angels who work inside the government. Once you arrive in government work, it does not make you an angel, we can't trust these people under the false pretense that they make us secure. They are doing a lot of things that they shouldn't do. I don't think we should be so quick about giving up our liberty for the false sense of security that they offer it. Never works out well.

RICK UNGAR: I think we all agree that there is a place for the NSA. When they are starting to check in on their own personal relationships it does need to be cleaned up. It's getting a little out of hand this is not the way it's supposed to be working, someone has to crack down. We are finding out today that the information that the President needs from the NSA, he can't even get. All of this is happening and you have to question as to what end.

MIKE OZANIAN: I think the broader problem here is yes, there is always a tradeoff with security and how much freedom you want to give up. The bigger problem is that President Obama who likes to lead from behind is doing just that here. We don't know exactly what information the NSA has here and what they have been doing. He hasn't come out and explained it to the American people. Given what has happened with the IRS, the AP and all these other things, I don't know if the American people would believe him at this point. That's sad.

MORGAN BRENNAN: I think the NSA is a necessary evil and I would even wager that in this day and age of terrorism and cyber warfare, it's more important to us than the nuclear arms program we have. I do not trust them. The bigger issue here, according to documents leaked by Edward Snowden is that NSA's internal review in 2012 found that on average every year since 2008 more than 2,000 episodes of privacy rules have been broken by the NSA. It needs to change. We need more checks and balances.

Employers aren't trusting high GPAs and a new skills-based test is rolled out for college seniors. Who is a better judge of students' abilities in the real world: colleges or businesses?

STEVE FORBES: It's businesses. When you go to a business that's when you get a real education. Unfortunately colleges have done a degrading system, what the Federal Reserve has done to the dollar, it's untrustworthy. So go with that test.

RICK UNGAR: I wish it was that simple. Colleges have a good sense on how to prepare you for what comes next if you choose to go that route. Businesses may interview you but they don't know who you are.

MIKE OZANIAN: The proof of that is the reason why so many kids, while they are in college do internships. We use interns at Forbes all the time and one way we figure out which ones we want to hire and which ones aren't cut out for Forbes. I'd say businesses.

RICH KARLGAARD: This is one of the many threats colleges now face. There are some highly technical jobs in medicine, engineering and science that employers are still going to look at the academic background. That will apply for the first job and the first 6 months then after that, employers will get a sense. The college experience isn't going to go away entirely as they measure of value.

MORGAN BRENNAN: I welcome the test, the same way I welcome internships, work-study programs, you have star credits you can earn in college. At the end of the day you can get a job, businesses know what's better. Colleges tie their stats according to their graduates employment rates and graduates placement rates. Businesses know what's better, but you still need the degree to get in the door.