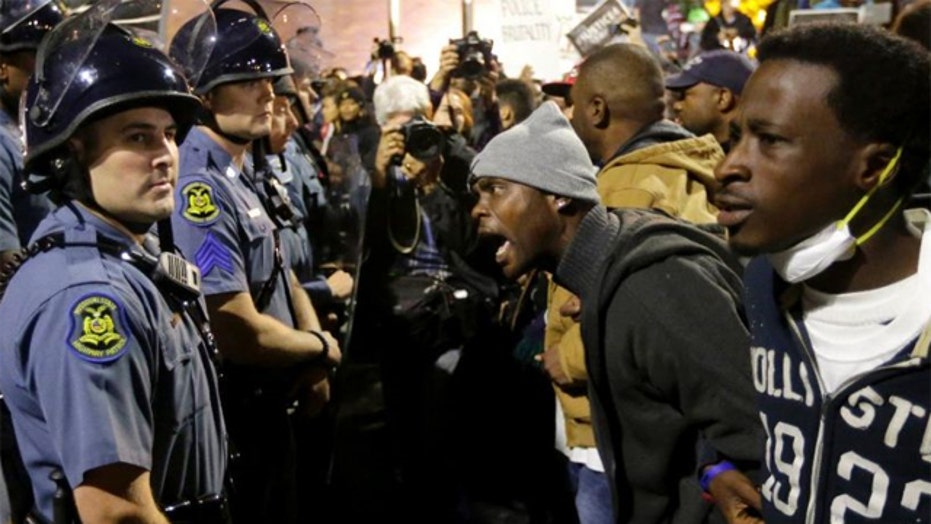 Is America more racially divided than the president thinks?

WAYNE ROGERS: I think it's bad and it's going to take a long time to cure, Eric. We don't really have a racial problem in this country. What we have is a cultural problem. 80 percent of black kids are born out of wedlock. There is no role model. The family is destroyed. The gang is substituted for the family, and we know that gangs live off the currency of drugs and theft. That's what goes on. This results in poverty, lack of education, police hostility; all of those things that are destructive to the society. It's a cultural problem; it's got to be address.

JEHMU GREENE: I certainly agree with the President, that we are less divided in the day to day relationships that people have. Just look at inter racial marriages. They've gone from 7 percent in 2000 to over 18 percent in 2012. We've got Annie on screens across the country and Jamie Foxx is making out with Rose Byrne.

JONATHAN HOENIG: You know, Eric, racism rises and falls with collectivism. The country's become more collectivist, so it has become more racist. Many on the left, including the President-- it's like they've divided us by income now and gender so race is going to be next.

KENNEDY: I don't disagree with the President on this. I think race relations are better in the fact that we can have more open discussions. When you have Rudy Giuliani and Charles Barkley saying things-there's no way they could have done that decades ago. We have better race relations in spite of people like Al Sharpton and Eric Holder. It benefits them to have a more divided society. I agree with Jonathan. What I will say to Wayne is fighting this drug war, spending billions of dollars on the drug war, it doesn't do good. That's why you're going to see populist Republicans like Rick Perry talk about sentencing reform, and that's going to be a big part of the 2016 election. They're going to have to reach out beyond their typical base and you're going to see people talking about not only reforming sentencing and things like that but limiting the drug war, which is costly.

JONATHAN HOENIG: Minimum wage destroys jobs. That's what the labor department said back in the 1930s when the first minimum wage was enacted. You know it happened under Bush, as well. George Bush raised the minimum wage in the latter half of his presidency and you saw the youth participation rate in this economy go down and down and down. The reason unions are for it-it's not because they make minimum wage, but because often times their wages are linked to minimum wage. As usual, they can't compete in a free market, so they use government force to try to enact their way.

KENNEDY: For these unions it's the law of unintended consequences. The problem is you're going to keep a lot of people from entering the job market to begin with, and with the employer mandate with ObamaCare. A lot of people who talk about this stuff have never owned a small business, and it's the small business owners who are going to get hosed. Not every corporation is Walmart, and they're not going to be able to pay an ample staff $15 per hour. Labor is a very valuable resource, and there's a reason these are entry-level jobs, which people won't be able to get because they'll be scarce or they'll have to increase prices.

JEHMU GREENE: Why not $20 which would make it more of a living wage. Let's talk about the minimum wage for a second. First, I'm shocked that Jonathan quoted a statistic from 1930. It's 2015. And if you look at states that adopted a higher minimum wage last year, they've actually seen higher employment growth than states that did not, period.

WAYNE ROGERS: Well, the disconnect is somebody who wants to reverse the free market system or reverse the social order. Jonathan was right in his first statement. This is coercion by the government to coerce people to hire everyone. All you got to do is look across the coast at Cuba and see what it results in: a lower standard of living. We have is a high standard of living because we have a free market society; that's a bargain between an employer and an employee what his wages should be. That's going to hurt employment, and Jehmu you're wrong. California, for example, has this and they have lost employment.

KENNEDY: C'mon, GQ, you can do a better job than that. People are entertained when there's balance because we know it's a chaotic, insane political environment. Obviously Democrats didn't have a stellar year. They had a horrible year because of crazy people like Nancy Pelosi who said "Democrats are not fear mongers. Civilization as we know it is in jeopardy if Republicans win the senate." And that's not insane? She chased Tom Morino down two aisles in the chamber because he badmouthed her on immigration.

JONATHAN HOENIG: A lot of Republicans are crazy, especially the ones that talk about all these mystical revelations. That makes the Dems look sane. If the GOP wants to be taken more seriously, they need to focus on American ideals: individualism, freedom, individual rights. If they want to seem sane, that's a good place to start.

JEHMU GREENE: Well, I'm angry because I think Texas tops the list with four reps from the state of Texas. How dare they? Come on, they could have done two different lists: the craziest Democrats and the craziest Republicans. I do think the Republican list would have been longer. But we have Carlos Danger, and it wasn't last year but we had Governor Blagojevich. We've had our crazies. I think the difference is the Republicans on this list, it proves you can actually be mean and crazy.

WAYNE ROGERS: I was surprised to learn that GQ is the arbiter of insanity here. It's like going to a proctologist to get your brain fixed. Maybe it's better to appear crazy. You mentioned Nancy Pelosi. There she was talking about Gruber and he was wonderful and this and all of that and he designed the care act. Then she denies she ever knew him. You've got more crazies on the other side.