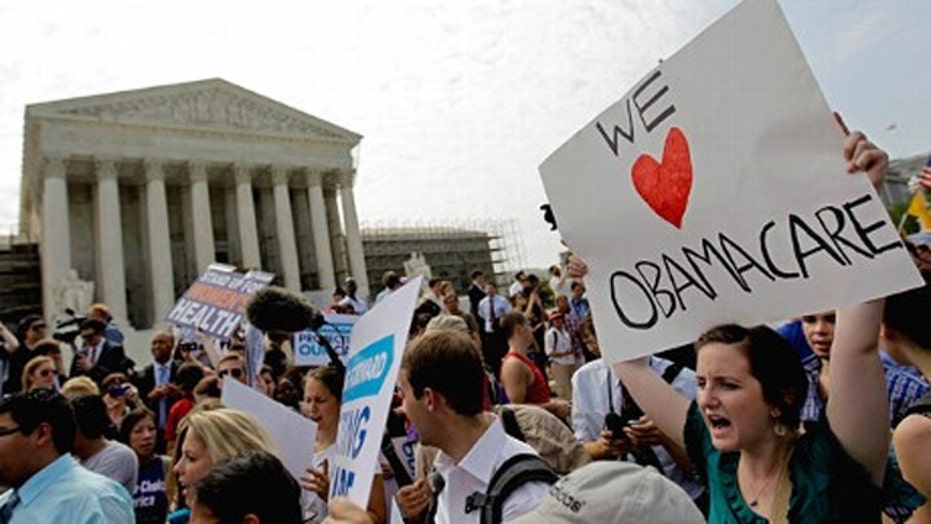 HEALTH CARE LAW: WILL IT HAVE "BUMPS AND GLITCHES" OR BE A "TRAINWRECK" BECAUSE OF HIGHER TAXES IN IT?

JONATHAN HOENIG: How would Harry Reid believe that spending even more money, more taxes, is going to have any beneficial effect. Obamacare is already a train wreck. You've got doctors leaving the practice, you've got premiums going up, you've got people getting their hours cut at work, and that's the result of central planning. Central planning always leads to the destruction of values, and for the president to say that this is just a "bump," this is just a "glitch"-I mean it's people's lives; it's people's money he's talking about. That's why Obamacare was doomed from the start.

AUSTAN GOOLSBEE: That's just confused. That entire rant lost me at "hello." That's a total mischaracterization of the bill. When Harry Reid is saying that they need to work on implementation, he's not talking about expanding an entitlement or anything of the sort. They're talking about just basic stuff. You've got certain governors around the country actively trying to undermine the law.

TRACY BYRNES: To call it a "logistical hiccup," I don't get that. My god, you don't know what's going to happen to the middle class. What about the Cadillac tax? What about the insurance premiums fees that are going to pay for all of this? And none of this is making health care better. We already know that doctors are turning patients away, and it's not even in full implementation. The people that we're trying to help with this are the ones that are going to get hurt at the end of the day. No one really gives about families making $250k or more paying an extra 3.8 percent to go Medicare, but it still means that it's less money in my pocket for me to save for my kids college if that's the case. This hurts all of us at the end of the day, and it doesn't make my care better.

WAYNE ROGERS: All due respect, no one really knows what the cost is. 2,300 page which say 17,000 times that the rules and regulations are going to be written by the Secretary of Health and Human Resources. It doesn't say that congress knew it when they voted on it, because they didn't know; nobody knew. You don't know now. There are 20,000 pages of this that constitute a tower in excess of 7ft tall of red tape. You don't know (Austan). Harry Reid finally spoke the truth when he said "this is a train wreck" because nobody knows the cost. You can't tell us today (Austan), and they can't tell us today!

TRACY BYRNES: If you think this is philanthropic, you're bananas. Come on now, these guys are strictly out for themselves. There was a time and place for unions in our history; today is not it, unfortunately. Really, the way the unions are looking at this-we keep all these illegals, we get them in our cute little club and we can increase our membership, because membership is tanking for the unions. They are reaching for straws here.

JONATHAN HOENIG: In my opinion we should stop all deportations. Unless someone's a Jihadist or maybe a leper, of course they should have a right to stay here. Individuals have rights, human beings, not simply Americans. So I'm against any type of deportation. I think it's actually horrific, but unions are just looking out for their own theocracy; they operate on the "might means right". So immigrants, occupy will get in bed with anyone who will pay their dues, and bolster their ranks.

AUSTAN GOOLSBEE: Historically, unions have not been the biggest proponents of immigration, so I don't think they are natural bedfellows. They often view immigrants as competition to domestic labor. I don't know enough about the details of this. I know I think that the prospect we ought to go out and try to get 2 million buses and find 15, 20 million people and deport them out of the country is both impractical, insane and would do great damage to the economy.

WAYNE ROGERS: I think Austan is right historically about this. There's no doubt about it: they've been, in the past, against this. The reason they're doing this now-the Gang of Eight is right, and they have a good formula here, I think, and that's the one that should be pursued, which says you've got to be here 10 years and then you can apply. You've got to go through all of that. You can't have a criminal record. All of those kinds of things which are good common protections from this. I think that's the way to proceed. Now, I'm not trying to do what Jonathan is referring to when he says unions--- Tracy is right, unions had a time and a place in this country. I'm a union man. I think they did have a time and a place, and I appreciate that time and place. It is not now, and it is not in this thing. They don't have a horse in this race.

TRACY BYRNES: It's a good thing my kids are on the baseball field right now, because they'd kill me for saying this, but I do think that there's something to be said about a longer school year. I don't know about the longer day. They do get tired; they have little minds. But we spend all of September recapping what they learned the year before, so September's a waste. Then we teach to these tests for a couple of months so by the time the summer comes they basically feel like they walked away with nothing. Let's keep them going so you don't have to do this big review process.

JONATHAN HOENIG: There's no correlation between the length of the school year and student achievement. U.S. students are already in class more than those in South Korea, in Japan, and in Finland. They've got much better scores. The only constituency this helps are the government-run schools, and the unions, which of course get to bill all those extra hours at taxpayer expense.

AUSTAN GOOLSBEE: I think that overall the data tends to show that it (longer school years) is better, especially for the worst schools. It's not, on its own, going to solve problems. You've still got to get good teachers in the classroom. You still have to do those things. The problem in Chicago is more extreme than anywhere else. The U.S. tends to be an outlier of one of the shorter school years, of all developed countries. And within the U.S., Chicago has had the shortest school year of all. So in Chicago days, New York City's got 6-week longer school years than Chicago's got.

WAYNE ROGERS: That's true (charter schools do better and go to class longer than public schools), but they're about to get unionized, so we'll see whether that stat changes or not. I agree with Jonathan on this. Quality outweighs quantity. Finland has shorter years, better educated. India has the same thing. There's a study done by Ohio State that says there's no difference at all. So there's a lot of controversy on both sides of this question, and I think you have to ultimately come down to what I first said: "quality outweighs quantity."

TRACY BYRNES: Airline fees taking off; now soda and coffee is a target

WAYNE ROGERS: While this market may be turbulent, for a long term hold, look at Google.

JONATHAN HOENIG: My favorite income-oriented stock right now doesn't pay a huge dividend, but is performing quietly and persistently- which is evidence of a bull trend. PowerShares Senior Loan (BKLN) tracks senior loans with floating rates and is uncorrelated with stocks, making it not only strong in its right but also a good diversification in a portfolio that's mostly either stocks, bonds or cash. Yes I own.