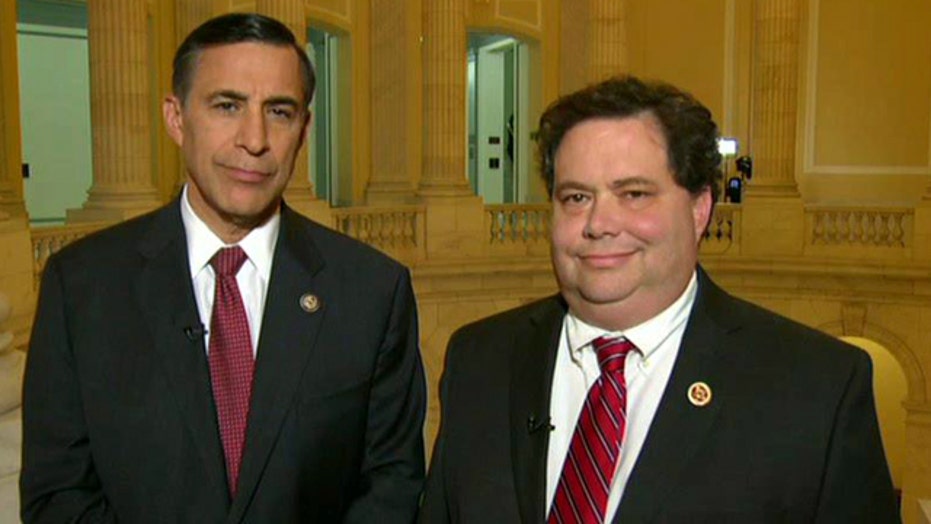 Were statistics changed to secure a 2012 election win for Obama?

This is a rush transcript from "Hannity," November 19, 2013. This copy may not be in its final form and may be updated.

SEAN HANNITY, HOST: Now, it's scary to think about what else the administration has done during President Obama's time in office, but one thing's for sure, Republicans are going to get to the bottom of this.

Joining me now is the chairman of that committee, Congressman Darrell Issa, and a lawmaker who put out the statement we just read, Congressman Blake Farenthold, is with us. Welcome, gentlemen, to the program.

REP. DARRELL ISSA, R-CALIF., OVERSIGHT COMMITTEE CHAIRMAN: Well, thank you, Sean, and thanks for covering this issue of what is clearly a serious allegation.

HANNITY: Well, let's just assume for a minute that the source that they cite is accurate. What does that mean? Would that have an impact on -- potentially on the electoral results? That makes the administration at least create a perception that's not true and using government resources to do it. What do you think the impact could be, if it's true?

It's a pattern of lies that is really concerning. It's a government of the people, for the people and by the people. You should be able to trust your government. And Census Bureau data, in particular, is used all over Wall Street, all over the government. It's absolutely critical that that information be accurate and its accuracy be impeccable!

ISSA: Well, Blake is exactly right. So many parts of government and private sector, including Jack Welch during his career, depend on the accuracy of this data. And the integrity of the Census Bureau has to be restored.

Right now, this allegation puts it in serious doubt. And the ripple effect from Census to Department of Labor, but also to the Fed and whether or not they're going to add stimulus, QE and the like -- all of that has a real effect. And even -- even, quite frankly, that jobs number certainly led to Wall Street making a different forecast.

So we have to get to the truth. We have to make sure that this allegation is true. And if it is true, then we have serious cleaning up to do at the Census Bureau, at a minimum.

ISSA: Well, whether it's the president getting away with saying that somehow Benghazi was not his statement or his -- on his watch, he told the truth about terrorist attack, or this, all of these go toward a president that enjoyed uplifting and favorable numbers going into the election, something for many reasons we don't believe he deserves, especially when you look at current events today, when his signature legislation is falling around his ears, something that Republicans said on the day we voted against it.

QUESTION: Can I just ask you if there's anything to this report, knock down that interviews were -- were faked in the Bureau of Labor Statistics, surveys on the unemployment numbers. Is there anything...

JAY CARNEY, WHITE HOUSE PRESS SECRETARY: Well, look, I would refer you to Census. That story is obviously misleading. I think a lot of people shed a lot of credibility engaging in conspiracy theories last fall about, you know, rigged jobs numbers. I have to tell you, as somebody who's been here for a long time, when month after month after month, the job numbers came in and then later were revised upward, it sure didn't feel like they were helping us.

HANNITY: What's your reaction to that, Mr. Chairman?

ISSA: You know, it's amazing that Jay Carney would talk about credibility when he reads the script, and the script so often is simply not true.

But having said that, look, we want to get to the bottom of this. We want to know whether or not there's a problem at Census and that problem is serious, even if it's one actor, but certainly if the controls aren't there to make sure there's a check and balance, we take seriously the responsibility for not just for the every 10 year Census, but for month after month in which those numbers are critical to our economy, and even a ripple effect to the rest of the world.

So we'll investigate it. We'll get to the bottom of it. And if it goes like so many other investigations, Jay Carney will at the end of the day be wrong.

HANNITY: All right, well, let's go through this list a little bit because, you know, we've had the IRS enemies list, the DOJ targeting of reporters, the NSA spying, Benghazi, Fast and Furious. I guess you could probably add ObamaCare to the list.

Now, we have a montage with the president saying he never knew about the many scandals. I mean, there seems to be a pattern. Allegations are made, they deny it, facts come out later, and by the time the facts come out, they say, "Oh, that's old news."

Let's just remind people of how they've responded to these past scandals.

PRESIDENT BARACK OBAMA, NOV. 14: On the website, I was not informed directly that the website would not be working the way it was supposed to. Had I been informed, I wouldn't be going out saying, "Boy, this is going to be great."

OBAMA, SEPT. 6: I said that I would look into the allegations. I mean, part of the problem here is we get this through the press, and then I've got to go back and find out what's going on.

OBAMA, MAY 16: I can assure you that I certainly did not know anything about the IG report before the IG report had been leaked through press -- through the press.

OBAMA, OCT. 16, 2012: I was not personally aware of any requests. Obviously, we have an infrastructure that's set up to manage requests.

OBAMA, OCT. 6, 2011: He's indicated that he was not aware of what was happening in Fast and Furious. Certainly, I was not.

HANNITY: Congressman Farenthold, is he aware of anything that seems to happen?

FARENTHOLD: That's the problem. What's worse? I mean, I fire people in my office when they don't tell me something bad is going on. Part of your job is to know what's going on. Which is worse, knowing about it or not knowing about it? What is he doing, playing golf all day and not reading the memos?

ISSA: Well, the president is very inspirational at times. He certainly reads a teleprompter well. But the business of administering this government and holding his various key deputies, his Cabinet and so on, accountable, seems to be an area in which nobody gets fired. And as a result, there's really no price to pay for not informing the boss, and in fact, not doing your job right, whether it's a website or it's 2,000 weapons going over the border, or in fact, not dispatching anyone to save our ambassador and the other three that were killed in Benghazi.

HANNITY: All right, guys, thanks so much for being with us. Appreciate it.