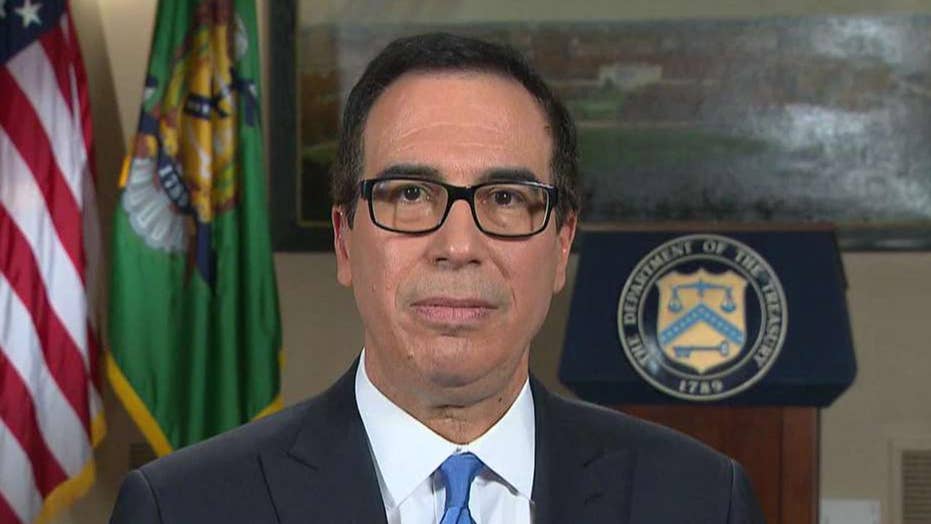 Mnuchin on impact 'historic' tax cuts will have on economy

Treasury secretary says Americans will start to see benefits in their February paychecks.

This is a rush transcript from "Special Report," December 20, 2017. This copy may not be in its final form and may be updated.

BRET BAIER: Let's talk about the tax cuts, the possible government shutdown and the
state of the U.S. economy. Treasury Secretary Steven Mnuchin joins us
tonight from the Treasury Department. Mr. Secretary -- thanks for joining
us.

STEVEN MNUCHIN, UNITED STATES TREASURY SECRETARY: Thank you. It's great
to be on the show with you.

BAIER: You know, this obviously is a big day for you. The president was
in his element there at the White House. Your thoughts that this is now at
the president's desk.

MNUCHIN: Well, Bret -- I think it's really historic. People said we
couldn't get it done and we did get it done. It's a great day for the
American public.

We fixed a broken tax system. We've delivered on big tax cuts for both
individuals and business. And this is all about creating jobs. So I think
this is going to be an enormous impact on the U.S. economy.

BAIER: Do you know when he will sign it?

MNUCHIN: I think we are just working out some of the logistics on that. I
think the important issue is it passed today and he will sign it as quickly
as he can.

BAIER: So will most of it take effect at the beginning of January? For
somebody sitting at home, how does this play out as far as their effect?

MNUCHIN: Well, virtually all the aspects of it will start on January 1.
And the really important issue is we have already started working with the
IRS and we are working on the withholding tables.

So we expect the American public will see tax cuts in their February
paychecks. And that is something we are going to work around the clock
through the holidays to make sure we get done.

BAIER: You know, this president has spent a lot of time talking about the
economy and oftentimes he refers to the markets.

The markets today didn't seem to jump for joy about this. I mean there's a
lot of factors with the markets always. Here is the President in a cabinet
meeting earlier.

PRESIDENT TRUMP: I heard a couple of our folks, Steve and Gary and a few others this
morning. And they are thinking that the market hasn't fully digested what
they've got here. I don't think the market has even begun to realize how
good these are like for instance full expensing and other things.

BAIER: So is he right? And should you judge this on the market's
response?

So I think it's a great investment opportunity in the U.S. I think this is
about bringing trillions of dollars back on shore that will be invested.
You already saw AT&T make a big announcement today about bonuses and more
investment. I think we're going to see a lot more coming from other
companies.

BAIER: Yes, you know, critics of this point to corporations, and they say
that it will just be used to buy back stocks and raise corporate salaries.
You point to the AT&T announcement that the president mentioned.

The FedEx CFO Alan Graf said last night on a conference call quote, "U.S.
GDP could increase materially next year as a result of U.S. tax reform. If
this occurs, we would like the increased capital expenditures and hiring to
accommodate the additional volumes triggered from this incremental GDP
growth."

So is that what you are seeing from most companies? Or is he just kind of
sugar-coating things?

MNUCHIN: No, no. I think that's exactly what you're seeing. And we've
had a broken tax system. We had a worldwide tax system that encouraged our
companies to leave their money offshore, to create jobs offshore. And we
fixed that.

We've created a territorial system. We've created the right incentives to
invest capital here, to have jobs here. And we expect not only will people
see tax cuts but people hey will see wage increases.

So this is all about getting the economy going again. I think as you know,
the president has repeatedly said we think we can get to sustained GDP of 3
percent or higher, and that will create very, very large economic growth.
That's trillions of dollars in additional revenue for the U.S. government.

BAIER: You know, you didn't have a single Democrat vote for this. And
they were out talking about you, sir, earlier today.

HOUSE MINORITY LEADER NANCY PELOSI, D-CALIF.: Let me go back to Mnuchin. I just think his
statement is just so -- Mnuchin, I mean look, we talk about billionaires
here.

SENATE MINORITY LEADER CHUCK SCHUMER, D-N.Y.: He just seems to -- Mnuchin seems to make it up as he
goes along.

PELOSI: -- won't cut taxes for the rich. They handed the top
wealthiest 1 percent 82 percent of the benefits.

BAIER: Your thoughts on all that.

They fundamentally disagree with us and I guess that's why they voted
against this. They don't believe that we can get the growth that we think
we can.

They don't believe in the American economy. They say they want to do
things that are good for workers but they voted against the bill.

And we have been saying the number one impact is to make America
competitive again, to fix the business tax system, deliver tax cuts for the
middle income. This is not about tax cuts for billionaires. This is about
tax cuts for working families, for people with kids, the child tax credits.

And, you know, I think you're going to see this in the polls as people get
paychecks. They are tired of listening to the Democrats complain about
this.

BAIER: Yes. Here's one element. This is candidate Donald Trump talking
about one specific element that he was campaigning on.

TRUMP: As part of this reform, we will eliminate the carried interest
deduction -- a well-known deduction -- and other special interest loopholes
that have been so good for Wall Street investors and for people like me but
unfair to American workers.

The hedge fund guys won't like me as much as they like me right now. I
know them all. But they will pay more. I know people that are making a
tremendous amount of money and paying virtually no tax and I think it's
unfair.

BAIER: So the carried interest loophole is still in. Why did that stick
in there?

MNUCHIN: Well, Bret -- as you know, the president did want to get rid of
that. That's something he's been talking about with us all along. He
spoke to me about it many, many times as recent as this week.

And I think at the end of the day, this is a great bill. It's a terrific
bill. You know, that doesn't mean that every single little aspect in this
deal is exactly as the President wanted it or is exactly what members in
the House and Senate.

MNUCHIN: This was about compromise.

But let me just put this in perspective.

The carried interest is a very small revenue impact. It is something that
impacts one group and the president wanted to get rid of it but the
president thinks this is a great bill. And it's going to be great for
American workers and for working families.

BAIER: Right. And there is negotiation in every big piece of legislation
but who specifically on Capitol Hill was fighting for hedge fund guys?
Private equity folks?

MNUCHIN: Bret -- I'm not going to comment and say specific names. You
know, this was a very collaborative process between the House and the
Senate. I think as you know, a lot of things changed in conference. It
actually became a better bill in conference.

And we couldn't be happier with the team effort across the administration,
the Treasury, the Senate and the House. So this is a big win for the
President and for the American public.

BAIER: Two more quick things. Do you have assurances that the government
is not going to shut down and you will have a short-term kind of continuing
resolution into the mid-January?

MNUCHIN: I think it's highly unlikely that there's a government shutdown.
But I don't want to give that assurance until it's passed by Congress and
it gets to the President.

I can tell you the President doesn't want to shut down. And you know, I
think that the right thing to do is let's get a short-term funding and
we'll deal with this issues in January.

BAIER: so the budget has $700 billion for increasing the U.S. military,
investing in that sort of thing. Is there assurance that these sequesters
are going to be cut? I mean these are the battles really even if you punt
to January that are going to have to take place in earnest, right.

MNUCHIN: Well, you're right. And these are difficult discussions and
they're going. We had a cabinet meeting today. The President made it very
clear and Secretary Mattis gave a presentation to us on the military. It's
a big priority.

We've got to make sure that Americans are protected. The President wants
our allies to begin to reimburse us for various different costs. But this
is a priority of the President to make sure our military has the resources
to meet our needs and protect the American people.

BAIER: Well, Mr. Secretary -- we appreciate your time on this historic day
for your administration. I know tomorrow is your birthday so I guess this
is a good birthday present.

MNUCHIN: Thank you very much. It's always great to be with you.