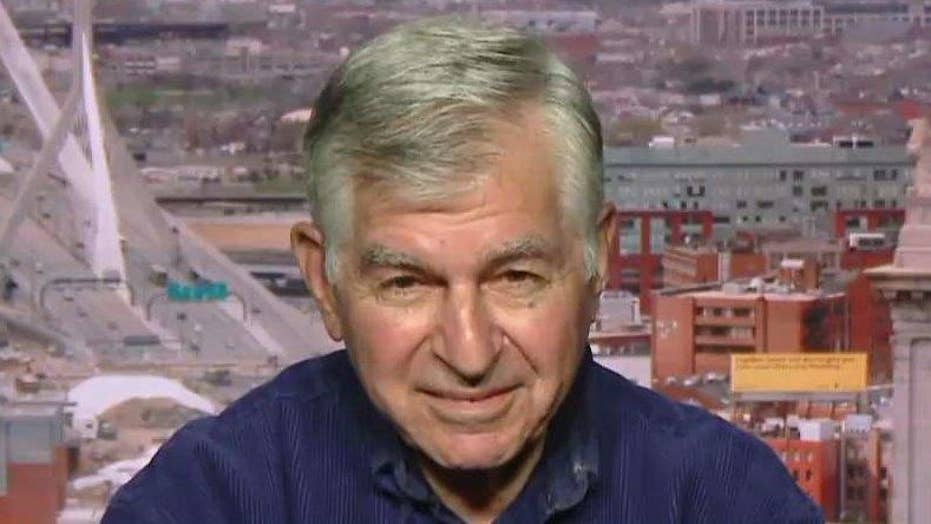 NEIL CAVUTO, HOST: All right. Drip by drip, we're getting a few more details on the plan that President Trump will formally announce tomorrow, a blueprint for a big tax cut, he says the biggest since Ronald Reagan, and maybe including Ronald Reagan. We will know tomorrow.

But it will call for, at least from the White House's perspective, a 15 percent corporate tax rate down from north of 35 percent now. Individual rates will also be addressed. The seven rates that we now know of will be whittled down to three, the top rate going from close to 40 percent to 33 percent. There will be two other rates.

All of this is welcome news, no doubt, to the former Democratic presidential candidate Michael Dukakis.

Governor, what do you think?

MICHAEL DUKAKIS, D-FORMER MASSACHUSETTS GOVERNOR: The first thing I want to say is, how are you feeling?

DUKAKIS: We haven't talked in a while.

DUKAKIS: You look -- you look terrific. So, good to talk to you.

CAVUTO: All right. And now this is where you just hit me hard that you're not necessarily pro this tax cut.

DUKAKIS: Well, how many times are we going to do this, Neil?

We did it under Reagan. It didn't work. He had to raise taxes 13 times over the course of his eight years as president.

CAVUTO: But they were still a lot lower when he left office, Governor, right, than when he came in?

DUKAKIS: Not a lot lower. And in any event, we had repeated tax...

CAVUTO: Well, they were over 50 percent when he came in.

DUKAKIS: That is true for upper-bracket taxpayers.

But we raised taxes under Reagan 13 times to make up for that gap.

CAVUTO: So, you're against a tax cut right now?

DUKAKIS: It doesn't make sense to me, when you have got a deficit, a budget deficit of close to a half-a-trillion dollars, not at all. I mean, if this is responsible...

CAVUTO: So, what happens, Governor? I mean, other -- and, by the way, we just talked to one, sounded like a moderate Republican on the Budget Committee who kind of agrees with that and this idea that -- I think she was saying they should be revenue-neutral.

I don't know how you quantify that and all of that. But do you treat a tax cut like as you would -- like, when you were running Massachusetts, as you would a federal -- I'm sorry -- a state program or spending, that you have to pay for it?

DUKAKIS: So, you can't -- I mean, at the state level, you are required to balance your budget in all but two states. So, you don't -- you can't play this kind of game.

All I'm saying, Neil, is that having done it once under Reagan, and it didn't work, having done it again under Bush 2, and it was a disaster, why are we doing this again? It just doesn't make any sense to me.

We have got a big federal deficit. We have got a national debt of $18 trillion. What is this? And it's not going to work again, I can tell you.

CAVUTO: But I will give credit to you. You have bemoaned the debt when -- whether it's Democrats or Republicans in office.

I mean, when you ran your campaign -- and I'm not saying this to blow smoke at you -- you were notoriously a cheap guy.

CAVUTO: And that's a good quality.

CAVUTO: Believe me, I don't mean to disparage that.

But I do find it odd that a number of your Democratic colleagues, sir, are now all of a sudden bemoaning the debt, when all of a sudden, it's suddenly an issue to them.

You could flip it around, right, Governor, and say, well, if the Federal Reserve is out of the stimulus business, and we are barely growing at 2 percent, and this quarter maybe a lot less than that, we need to stimulate this economy some way.

DUKAKIS: All I say is that this is not going to stimulate the economy.

The Greeks have an old saying, Neil. Things happen, and you are supposed to learn from them. When are we going to learn? I just don't understand this.

We tried it twice under two Republican presidents. It didn't work. It created serious problems, especially under Bush 2. And, remember, Bill Clinton left a surplus of a quarter-of-a-trillion dollars and a plan that would reduce and eliminate the national debt in 10 to 12 years.

DUKAKIS: And now we have got another Republican president, and he wants to do the same thing, only more so.

CAVUTO: All right, but would you argue that tax cuts are stimulative?

DUKAKIS: Well, they may or may not be stimulative. They certainly didn't produce the kind of stimulus that their proponents were arguing for.

CAVUTO: It was pretty big in the Reagan years. It was significant with Bush, right?

I mean, you know, there's something called fiscal responsibility. I used to refer myself -- refer to myself, Neil, as a liberal who could count. I mean, we're paying, what is it, I don't know what it's costing now just to service the national debt. It's huge. And that's...

CAVUTO: But both parties have contributed to that by spending more than we have.

DUKAKIS: I'm not saying that. All I'm saying is that, in Bill Clinton's last year -- and you remember this -- he got up and he said, OK, we have arrived at the point where we finally have balanced the federal budget.

This was the first time in, what, 50 years. We have got a good surplus. Let's use it to reduce and eliminate the debt in 10 to 12 years. That was the Clinton plan.

CAVUTO: But we do know, in retrospect, that by the end of 2000, we were heading into a recession. It wasn't nearly as bad as what we would get later on.

CAVUTO: So, you could argue the time has come for that. But we could talk in circles on that.

CAVUTO: Well, I think you are making a generality there, Governor, with all due respect.

But I do want to pick your brain a little bit on Donald Trump and how you think he is doing. I know you have been saying he is doing a boffo job, and you are really impressed, and you are so glad he won.

But 100 days, that we use that as sort of like a barometer of things to come, what do you think?

DUKAKIS: Well, let me say this to you. I kind of agree with him that this 100 days is not something to take seriously.

I mean, the real question is, what kind of a country is this going to be over the course of the four years? And...

CAVUTO: Careful, Governor. We are live Saturday on the 100th day, and we're making a big media to-do about it.

DUKAKIS: Well, if you want to do that, fine.

DUKAKIS: But running the country is a tough job, no matter who is there. And I certainly appreciate that.

So, the fact that he is or isn't at some point at 100 days, Neil, I don't think makes a lot of difference.

Look, it's been a chaotic 100 days. I don't remember an administration quite like this. And let's just hope that...

CAVUTO: Let me get your take.

Media coverage of Sean Spicer, and he's been ripped into. And I thought of the way Jon Lovitz and others would try to play you, and Dana Carvey would do George Bush Sr.

Did it ever bug you? Does that stuff bug you? Any advice for Spicer as he deals with this, and the president, by the way?

DUKAKIS: No, look, I feel sorry for Spicer. I mean, being Trump's press secretary has to be the toughest job in the world.

But you have got to accept this. I mean, you know, humor is part of it. We're all big boys and girls. And if people are going to use humor to kind of describe what you're doing...

CAVUTO: Just have a sense of humor about it, right?

CAVUTO: Have a sense of humor.

DUKAKIS: You have got to have a sense of humor.

DUKAKIS: And, you know, I think it's one of those things.

I don't envy Spicer, because, you know, that job has to be a very tough job. But you certainly have to understand that folks are going to use humor, and you have got to use humor.

CAVUTO: Governor, thank you. I'm sorry to jump on you.