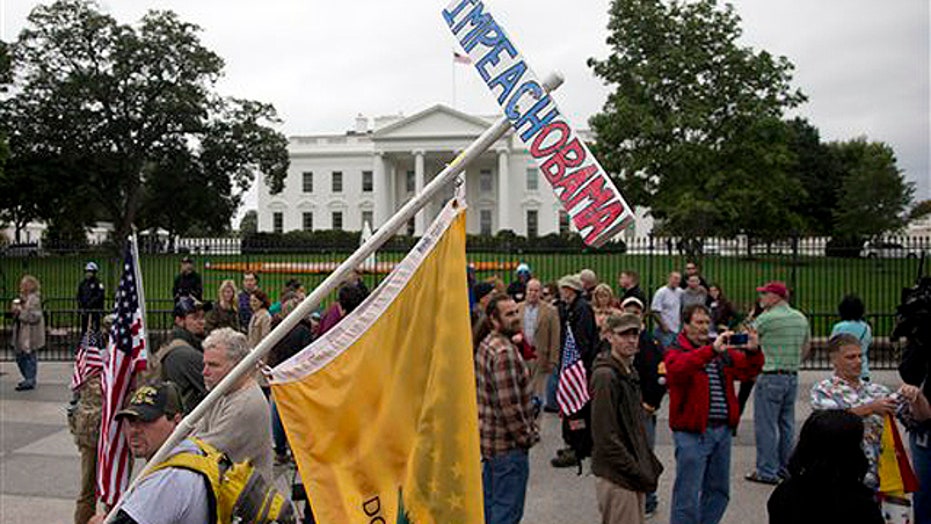 Is Washington getting the message?

Exclusive look inside the latest march in D.C.

This is a rush transcript from "The Kelly File," October 14, 2013. This copy may not be in its final form and may be updated.

Dennis, it's been amazing to watch the coverage of this event which unquestionably had some Tea Party members there, some politicians there, but had a lot of vets there and regular Americans who are upset about the barricades being put in front of these memorials. But you might not even know that if you watched channels other than Fox because they want you to believe that it's all about the so-called fringe. You were there. Tell us what you saw.

DENNIS MICHAEL LYNCH, DOCUMENTARY FILMMAKER: The other channels upset me. And they upset me because they are feeding into the divisive behavior that the White House has created. I watched men and women come together at that memorial. It was beautiful. There were men there with no legs, with no arms crying like you just saw. How dare anybody -- how dare anybody use them as a political pawn for a way of trying to boost up their own ratings. If it weren't for these men and women, there would be no television.

KELLY: And yet if you watch the coverage of this on our competitors today, these are the images. Let me show you the images that are wallpapering the other channels. And these are images from the events. So, they are legitimate to show when covering it. Signs calling for the impeachment of President Obama. Signs suggesting that -- this man with a confederate flag. So far as I can tell this is the only man who had a confederate flag. And then this sound bite from Larry Klayman who is the founder of Judicial Watch and Freedom Watch which has basically been on a loop. Listen.

LARRY KLAYMAN, FOUNDER OF JUDICIAL WATCH AND FREEDOM WATCH: We are now ruled quote-unquote by a president who bows down to Allah.

I call upon all of you to wage a second American nonviolent revolution, to use civil disobedience, and to demand that this president leave town and get out, to put the Koran down, to get up off his knees and to figuratively come up with his hands out.

KELLY: Now, I ask you whether Larry and the people holding those signs and that confederate flag are representative of what you saw this weekend?

LYNCH: What I saw this weekend was a collection of thousands upon thousands of veterans, that if their president, Barack Obama, was to fall down on the ground whether they agree with his policies or disagree, they would protect his life. Those were the people at that memorial. And it is a shame that we find ourselves in a place and time where America is going to learn all of its lessons the hard way.

Megyn, I was there from start to finish. I was hoping to come on your show tonight to tell you that this was a spark, that spark we've been waiting for. Because we had it with the two million bikers to D.C. I covered that as well. That was a thing of beauty. But it didn't get its time aired. I also watched the truckers. They failed on day one but they came back and rallied on day two but nobody is talking about that.

And these vets, they came from all over the country. We should be celebrating the fact that these guys are coming from all over the country and instead we're using it to get ratings. If CNN and MSNBC want ratings, cover the fact that the truckers came down the road outside that memorial, and that vets were going up and throwing $20 bills in the window and saying thank you. Here's gas money. I saw grown men cry including myself. We had 90-year-old men in a bus for an hour and a half, all of the media had gone home already. OK? I was there.

They were left in the street. The cops wouldn't let them go up 500 feet and drop them off in front of the memorial. And these men are so old they didn't realize that there was anything going wrong. They thought this was the norm. And it breaks your heart. And then they talk about like these Tea Party whackos. There are no Tea Party whackos there. You know, let me tell you. There were a couple people there for Obama screaming profanities at Sarah Palin. And you know, what? I really wish -- I have nothing against Sarah Palin or Cruz or anybody. I'm for America. I wish they didn't come. I wish there were no politicians there. We didn't need that.

In fact, here's something that's not covered. Those veterans were standing out in the rain. It was supposed to start at 9:00. And I went up to Larry, I said Larry, what's going on? Why aren't we starting this? And he says, because we had to wait for Sarah Palin. I said give me that microphone. These men are waiting. And I went and I opened the ceremonies. Larry didn't say, oh no, I have to follow, you know, policy. He handed it over. Everybody was there --

KELLY: Talking about a different Larry?

LYNCH: No. And then when I was watching these 90-year-old men get wheel chaired down a wet street, I saw the barricades going to the White House and I ran to that White House. I was there before any other camera and I was there after the cameras left. I did not see one veteran act in a way that was unbecoming.

KELLY: But what was their message? Now, it's been so drown out by so many outlets. What was the message they were bringing?

LYNCH: Megyn, this is what they did. When they carried those barricades, they were carrying America. When they took those barricades and they threw them in front of the White House, they were throwing the frustration of every American who has lost it because this is the way that D.C. operates, divisive.

Until this country comes back together, we don't have a chance, and the only way that this country is coming back together is through the American people. The politicians aren't going to do it. And I will not accept this weekend or the last week with the truckers as a failure. This was a spark. There is a movement taking place, a nonviolent American movement taking place.

And I can tell you, Megyn, you're going to have me back on this show a hundred times because we'll going to keep on going and keep on going until things change in the right direction.

KELLY: Thank you for documenting the message.

LYNCH: Sorry for losing it a little bit.

KELLY: Not at all, Dennis. Thank you so much for being here.

LYNCH: Thanks for having me.