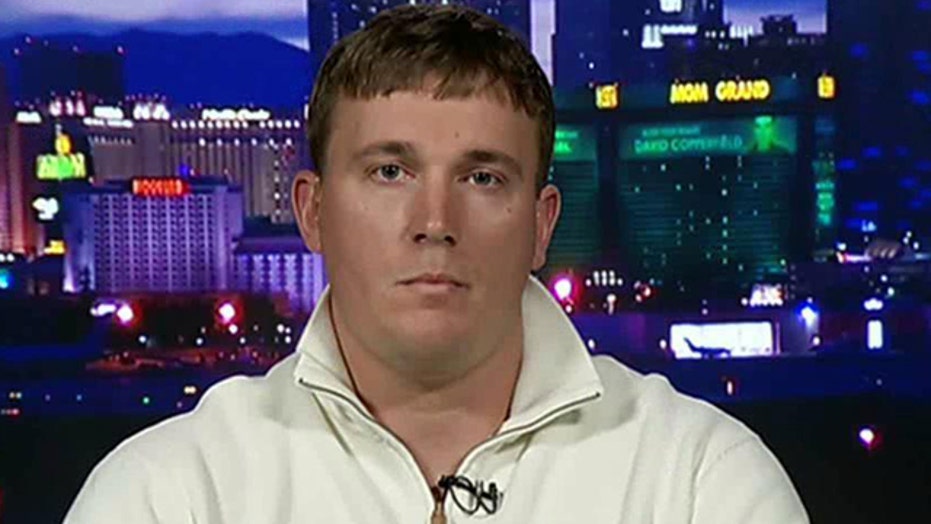 Some in media suggest Navy SEALs in film died for nothing

This is a rush transcript from "The Kelly File," January 13, 2014. This copy may not be in its final form and may be updated.

MEGYN KELLY, HOST: And that was a clip from the new movie "Lone Survivor" which tells the true story of four Navy SEALs on a covert mission in Afghanistan back in 2005, and what happens when they are ambush by the Talibans. The film just had a big weekend. In fact, one theater in Texas ended up canceling several other hit films, "Wolf of Wall Street," and others to accommodate the huge audience that wanted to see "Lone Survivor."

But now we're seeing some media reports starting to criticize the film as pro-war propaganda and questioning the mission of the SEALs. That is not sitting well with Sergeant Dakota Meyer, he is a Marine Corps veteran who received the Medal of Honor for his heroic acts during a 2009 firefight in Afghanistan. One of only three living recipients of that incredible honor.

It's great to see you, Sergeant, thank you so much for being here. Your reaction to some of the pushback we've seen from some that this film's propaganda meant to lift up the military.

SERGEANT DAKOTA MEYER, MEDAL OF HONOR RECIPIENT: Well, Megyn, you know, I'll tell you, whenever I keep hearing propaganda, I guess you can call it whatever you want to. But I understand that that propaganda, whatever they're calling propaganda, is the reality for .4 percent of the nation that has gone over there for the last 12 years, fighting these wars so we can be free -- independent and freedom. So that propaganda our reality.

So, you can call it whatever you want but, you know, I mean, it's not propaganda. I mean, these are the stories of the men and women who are sacrificing and they have to come back and tell the story so that other people know. I think what Marcus did in writing his book and going out and --

MEYER: You know, Marcus, I think what he's done is I think, you know, it is great, I mean, he has to tell his story so people realize it.

KELLY: He gave an interview to an anchor on CNN, they had a contentious exchange. I'll play you part of it that is getting some headlines.

JAKE TAPPER, CNN ANCHOR: I don't mean to disrespect in any way, but it seemed senseless, all of these wonderful people who were killed for an op that went wrong.

MARCUS LUTTRELL, FORMER UNITED STATES NAVY SEAL: We spent our whole lives training to defend this country, and then we were sent over there by this country -- so you're telling me that because we were over there doing what we were told to do by our country that it was senseless? That they died for nothing?

TAPPER: No, I'm not saying that at all.

LUTTRELL: That is what you said. So, let me just say that, yes, it went bad for us over there, but that was our job, that is what we did.

KELLY: Your reaction to that, Sergeant?

MEYER: You know, it is not senseless. You know, the problem is, people don't understand what the mission was going over there. It is not like what it was back in World War I and World War II where it was a country against the country, and you know, somebody had to give, and that is how you decide the win of a war. We went over there and our mission was to stabilize that country, to put them in a position to where they had an opportunity to go and secure the country and make a difference. We did that. We helped them form their government, we helped provide security. The men and women are still over there sacrificing. I just got back from Afghanistan over Christmas, and I'm telling you the sacrifice is not for nothing. And I told those Marines over there, don't come back and let people tell you that it was for nothing, because it was.

KELLY: And you know, I think what Jake Tapper's defense he was trying to give voice to how some people in the country look at that war and then give Marcus Luttrell the chance to respond to that. And it started a dialogue on that subject. Another thing has is being discussed right now, Sergeant, is what Bob Gates said, about how the president feels about how these wars, about how Iraq is the so-called bad war and Afghanistan is the so-called good war. And Mr. Gates, his interpretation of the president is not ever been fully behind the mission in Afghanistan, and actually believing, perhaps being convinced that it may fail. Here he is over the weekend speaking to his book.

ROBERT GATES, FORMER SECRETARY OF DEFENSE: It's one thing to tell the troops you support them, it is another to work at making them believe that you believe as president that their sacrifice is worth it. That the cause is just.

President Bush did that with the troops when I was secretary. I did not see President Obama do that.

MEYER: So, my question is why is he just now saying this? You know, he was in a position to make a difference, to make a stance and to say something. I mean, why, Megyn, why does he wait until now to say it when he is not in a position to do it?

He was supposed to represent us and take, you know, take care of us. Why didn't he do it then? If he didn't believe that the power above us was doing was right, then why didn't he step down?

KELLY: I can't let you go without asking you about the Al Qaeda flags flying over Fallujah in Iraq.

MEYER: You know, it infuriates me, but let's say this -- the Iraq War, don't give up on Iraq yet. I mean, I see that this is a test for them, but let's don't give up on them, let's wait and see what happens, don't count them out yet. You know? I think that what is happening is we're reporting on this, so we can say, I told you so, but I don't think we're there yet, I think let's sit back and watch and Iraq may surprise you.

KELLY: Dakota Meyer, it's an honor to speak with you, the third living recipient of the Medal of Honor since the Vietnam War, deployed twice, Iraq, Afghanistan, we appreciate your service to this nation, sir.

MEYER: Thank you so much.