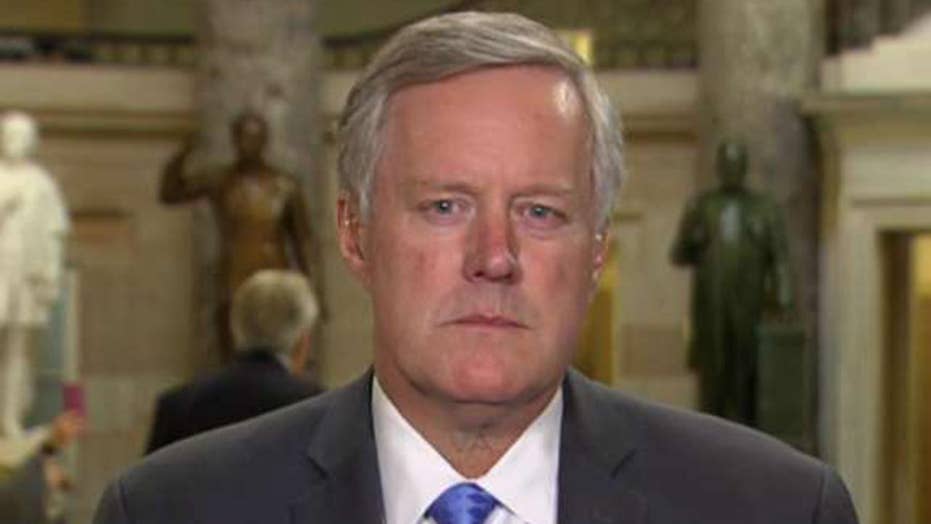 Meadows on 'troubling' new poll for GOP ahead of midterms

Chairman of the House Freedom Caucus responds to new poll that gives Democrats a double-digit lead over Republicans.

This is a rush transcript from "Your World," March 19, 2018. This copy may not be in its final form and may be updated.

NEIL CAVUTO, HOST: The read on all of this from the chairman of the House Freedom Caucus, North Carolina Republican Congressman Mark Meadows.

Chairman, this is all despite the tax cut that a majority of Americans now seem to like, independents seem to like. But when it comes to controlling, Republicans, they don’t like.

REP. MARK MEADOWS, R-NORTH CAROLINA: Well, I think what we have got to do, Neil, is continue to work and deliver on behalf of the American people.

It's real easy to look backwards and say we delivered tax cuts to many of those voters that will be going to the polls in November. But it's not enough to rest on what we have done in the past. We need to be aggressive and continue to work on the agenda going forward. And so, you know, is it troubling, the numbers that we see?

Certainly. It would be disingenuous to suggest otherwise. But, in that, if we continue to deliver on our promises and keep our promises to the American people, they will show up in November.

For me, I think it's really incumbent upon us to press our leadership, to say not, well, we can look backwards on what we have accomplished. We need to about dealing with immigration, dealing with continued rollback of regulations, making sure that those tax cuts are permanent.

I believe we will do that on April 15. But we have got to be serious about delivering each and every day, not just one month out of the year.

CAVUTO: Do you ever scratch your head and think there might be other factors in play here? I’ m wondering about the Mueller investigation and where it could be leading?

And now, all of a sudden, the president tweeting specifically about Mueller and to the point that some Republican colleagues of yours are saying, just don't mention it. Don't mention him. What do you think?

MEADOWS: I mean, in my conversations with the president, firing Mueller has never come up.

I think he's frustrated, as most of my constituents are, with the fact that we continue to investigate this narrative where there's been no collusion shown. HPSCI has come back with their report in the -- from the House Intel Committee and saying that there's no collusion.

But they believe it's time for Robert Mueller to go ahead and wrap this up.
And I think that there are more...

CAVUTO: But the president is now mentioning him by name, Chairman.

CAVUTO: And I guess a lot of people have read into that -- Lindsey Graham was among those saying, you do that, Mr. President, you fire that guy, it's the beginning of the end of your presidency.

Do you buy that?

I can tell you I did. And it has not come up as an option, even a consideration of firing him.

CAVUTO: If he did, if he did, would you be worried about that?

I think we need to let the Mueller investigation come to a close. But I can tell you, back home in North Carolina, I just came back. And all of them are saying, at what point are we going to go on and be serious about the agenda that truly this president campaigned on in November?

And so I think it's -- you know, it's growing old on the American people. It may be a good talking point for Democrats, but it's certainly not resonating back home.

CAVUTO: I know you have got this spending measure you're looking at now.

CAVUTO: And this could be easily completed or complicated here.

But it comes at a time where the president is upping the trade war ante. To hear the German finance minister tell it -- I guess he's going to in the United States for a couple days -- be careful for what you wish for, Mr. President, because this could get out of control.

Is he right? Is that German minister right?

MEADOWS: Well, any times that you have trade wars or tariffs, that it can get out of control.

I do think that the administration is starting to look at more the trade deals than blanket tariffs. We have seen some carve-outs. Hopefully, we will see more for carve-outs for other nations as we negotiate in earnest there.

I’ m concerned about where we go with the economy. It's not just in this particular issue. But it's the spending that is bill coming up, Neil. In just a few hours, we will be rolling out the spending bill.

When we're looking at a trillion-plus-dollar deficit perhaps as early as this October, when the numbers come out, that's under a Republican administration.

CAVUTO: Do you think we can avoid a shutdown?

I do believe that we will avoid a shutdown. Listen, the hard part was done. They agreed to larger numbers. I’ m not in favor of those numbers, because it grows the size of government by 13 percent. But those numbers have been agreed to.

Now it's just moving those around to make sure that Democrats and Republicans are happy with it. I do think that, by Friday, there will be a deal there. And even though there's still a lot of negotiations to go on, I don't know that conservatives are going to have a whole lot to applaud in this particular deal. But I don't see a shutdown happening this week.

CAVUTO: All right, Chairman, thank you very much for taking the time.

Copy: Content and Programming Copyright 2018 Fox News Network, Inc. Copyright CQ-2018 ASC Services II Media, LLC. All materials herein are protected by United States copyright law and may not be reproduced, distributed, transmitted, displayed, published or broadcast without the prior written permission of ASC Services II Media, LLC. You may not alter or remove any trademark, copyright or other notice from copies of the content.