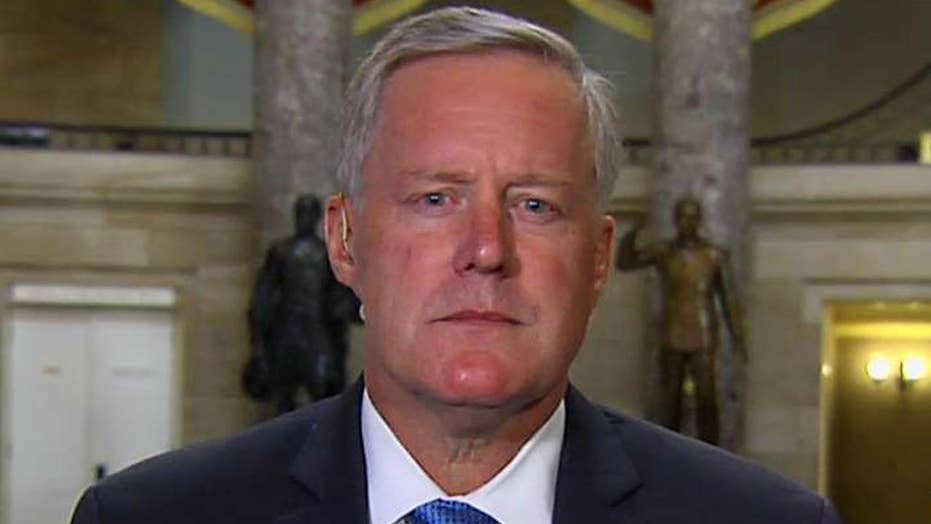 This is a rush transcript from "Your World," July 11, 2017. This copy may not be in its final form and may be updated.

NEIL CAVUTO, HOST: We just talking here during the break about this whole issue of summer breaks here. The Senate is cutting its August recess in half.

Chairman, very good to have you here.

REP. MARK MEADOWS, R-NORTH CAROLINA: Neil, it’s great to be back with you. Thanks very much.

CAVUTO: What do you think of your Senate counterparts looking to put in a little extra work in the first two weeks of August?

MEADOWS: I applaud the leader for taking a bold step to say that we’re going to stay in.

As you know, we have been calling for that for weeks. We believe we need to stay in the entire month of August. But it’s not enough to just stay in. We have got to be decisive and take action.

So, it’s not just health care. It’s tax reform, like you were talking about. It’s the debt ceiling. Let’s go ahead and get them done. We know they’re coming up in September. We might as well go ahead and start debating it now.

So, for us, we think it’s a good move. We’re calling on our leadership to support that and at least stay in for the first couple of weeks of August.

CAVUTO: Chuck Schumer was mentioning in his own press availability today that you guys could be working two weeks, two months, two years, and you would still come zilch on health care because the American people still hate what you’re trying do and don’t much like you.

MEADOWS: Well, I’ll tell you, that’s real sweet coming from a guy who said he wasn’t willing to help at all.

So, just like Wall Street is trying to take a look at this and will we move tax reform, will we lower taxes, increase the debt, I can tell you, not only will we do health care repeal and replace, but everybody is going to be surprised when we have a productive August and actually put things on the president’s desk in September to sign into law.

We’re committed to make sure that we do that. And I would love to come back on when we have Mr. Schumer eating humble pie.

CAVUTO: Chairman, have you heard from Speaker Ryan, whether he too would cede to your wishes and keep the House open in August?

Obviously, I broached it with the speaker a number of times. They were saying, well, Congress works best when there’s deadlines. And, indeed, things do get done at the very end of the 11th hour.

But yet, with this, what we need to do is do self-imposed deadlines. Let’s go ahead and get health care out of the way. I believe that if we set in place before we leave in August the parameters of reducing corporate taxes down to 15 or 16 percent, look at repatriation, looking at...

CAVUTO: By the way, you meant at -- reducing taxes. You probably heard that one of the plans the Senate is cooking up calls for keeping those taxes, the 3.8 surtax on the upper income and that nine-tenths a percent surtax for the upper income for Medicare in place.

MEADOWS: Well, I have heard that. But I also know that there’s no other plan to go with that proposal. I mean, that’s a political decision, not a policy decision.

CAVUTO: But if something like that came back to the House, how would you feel about that?

MEADOWS: You know, here, we have been very firm. We believe that all the taxes need to be repealed. And, obviously, as we look at that, that’s been our official position. It’s what senators voted on.

CAVUTO: So, that would be rejected right away?

MEADOWS: But I do want to say this. We want to look at it in the context, Neil.

Here’s what we have on the backside of it. Even if you let that in as a potential pay-for on the repeal and replacement, we have got tax reform on the backside of that. We know that lower taxes stimulate the economy. and that’s...

CAVUTO: So, you would be open to that as part of a means of getting to the tax thing?

MEADOWS: Well, the devil is in the detail.

MEADOWS: I mean, our official position is to repeal all the taxes.

MEADOWS: At the same time, I want to make sure before I weigh in on anything that I look at both the tradeoffs.

CAVUTO: Chairman, I just want your thoughts on this whole dust-up of what Donald Trump Jr. knew and who he knew and what he was talking to.

CAVUTO: I hear different lawyers’ opinions on this. I don’t even know if you’re a lawyer. I’m not.

CAVUTO: But I do know that it doesn’t look good, right, for someone to be meeting from the Trump campaign, let alone his eldest son, with the Russians to talk about some material they might have on Hillary Clinton.

MEADOWS: Well, I mean, any time that you have an e-mail that comes out like it does, that’s not good news for the administration.

At the same time, when we look at that, Neil, that’s why we have a special counsel in Mueller to look at all of that.

CAVUTO: No, I know that, but how do you feel about that, yourself?

MEADOWS: Well, obviously, you don’t feel good about it. You wish that it hadn’t happened. And yet, at the same...

MEADOWS: Well, no, I wouldn’t.

But every political person makes different decisions there, Neil. And what I can say this is, when you have really everything on the line, part of the context when I read that was saying, well, was Hillary and her campaign doing things that she shouldn’t have been with the Russians?

Well, that’s a little different context. There’s all kinds of rumors that float around here on Capitol Hill.

CAVUTO: No, I understand that, sir.

But the reason why I mentioned it is because Donald Trump Jr. had said in March that he had no meetings with the Russians.

CAVUTO: We come to discover not only did he have at least one, and a fairly important one, but that he arranged it. He set it up.

MEADOWS: Oh, without a doubt.

CAVUTO: ... to continue investigations, because what else did they leave out or mislead people on, right?

And I think, when you look at that, is it good news, the answer is no. And yet I am fully confident that we will get to the bottom of it. We have called for hearings, a number of things.

The real key is, the American people want to move on. You talked about what is happening. I just came back from North Carolina. This is not even on their radar. They’re concerned about what is going to happen in terms of jobs and taxes and all of that.

CAVUTO: I realize that.

Do you think that the Trump administration, maybe not deliberately, has potentially ruined it for you guys or hurt you guys, because now there is this sort of drip, drip, drip of stuff that could get in the way of very things you want to get done? Is any part of you angry about that?

I can tell you what is angry -- what I’m angry about is the fact that the president hasn’t been able to sign anything into law. It’s really on Congress to put things on his desk.

There’s nothing that stops Congress from doing that, not whether it’s these hearings or anything else. And so is it a distraction? Without a doubt. But at this point, we have got to keep focus on the agenda for the American people. I think we can do that.

CAVUTO: Well, you remember what he said about the plan that you came up with, that it was mean.

MEADOWS: Yes, I understand that.

And, really, now I probably have conversations not only with the administration, but with senators, on a daily on coming up something that works.

MEADOWS: For me, it’s all about making sure that we find a good compromise.

You know that I’m going to shoot straight with you. Are we there? Absolutely not. Will we get there? I told you, by September, we’re still going to make it. We’re going to make health care in July and tax reform in September.

CAVUTO: But if that doesn’t work out -- I’m sorry -- my producer is getting very angry at me.

CAVUTO: But if that doesn’t work, you’re going to proceed to the tax cuts?

MEADOWS: We’re 100 percent committed to that.

Mr. Chairman, it’s always good seeing you again. Thank you very, very much for joining us.