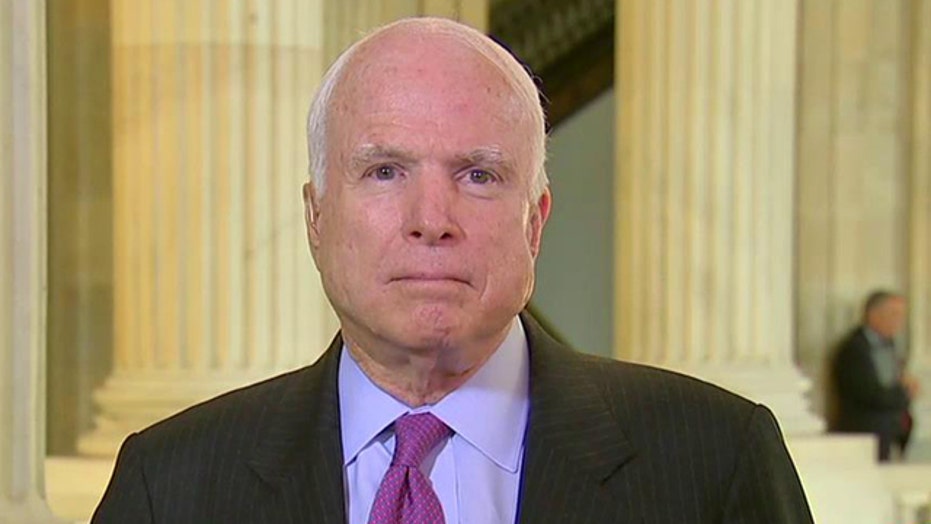 McCain: Lack of Mideast help a result of American indecision

Lawmaker on the White House pressure to arm Syrian rebels

This is a rush transcript from "Hannity," September 15, 2014. This copy may not be in its final form and may be updated.

Senator, according to The Hill this weekend, the Syrian rebels agreed to a ceasefire with ISIS. Does that change the equation any?

SEN. JOHN MCCAIN, R-ARIZ.: Well, they haven't, and they're still being slaughtered, and they are still a corps of brave young men, many of whom have already died, that are still fighting for freedom, and I believe that they can still be viable over time.

But let me say I have just heard, and it may be wrong, that no Arab country has agreed, Middle Eastern country has agreed to engage in air or ground support against ISIS. This is a direct result of American indecision and lack of credibility.

And when you talk about a coalition, I think you're going to have great difficulty, Sean, in getting any Middle Eastern country to cooperate in any fashion because of the decisions the president's made, including the commitment to bomb Syria and not to.

And by the way, I could show the president targets on the map today that he could be bombing and killing ISIS people, the same ones that carried out this hideous decision. Why the delay in the bombing campaign in Syria? I'd be very interested to know.

HANNITY: Well, a couple of things, as we've been reporting tonight.  Number one, they said in The New York Times no shock and awe. I think we've already telegraphed there's no boots on the ground. Now we're saying it's not going to be an overwhelming campaign. Then we don't have any allies that have publicly joined with us, no Arab countries. And on top of that, I am concerned about this report about Syrian rebels and the ceasefire with ISIS. Senator Paul...

MCCAIN: But that's not true.

MCCAIN: It's not true.

MCCAIN: It's not true. Whether -- I don't care about the report. I know these people intimately. We talk to them all the time. But also, let me point out that if we are going to conduct a conflict the way you are describing it, and I'm afraid that's the case, this is reminiscent of Vietnam, the gradual escalation that ended up in one of the worst defeats that America has ever suffered.

HANNITY: Let me ask you about what your colleague, Rand Paul, said about it this morning. He said it's a mistake to arm them. Most of the arms we've given the so-called moderate rebels have wound up in the hands of ISIS because ISIS simply takes it from them or it is given to them, and we mistakenly actually end up giving it to some radicals. How -- how -- look, things are very...

HANNITY: I'm not trying to cause a fight, Senator.

MCCAIN: ... any of these people? No, no, no. I -- we're going to have a fight because it's patently false. This is the same Rand Paul that said we didn't want to have anything to do with anything to do in the Middle East, by the way. I don't want to get in a fight with him at all.

MCCAIN: But it's not true. I know these people. I'm in contact with them all the time...

HANNITY: All right, then let me ask you this...

HANNITY: Senator, I know your background. I believe you when you say you have sources on the ground. But I've got to be clear because I was a little surprised. It was in The Hill. It was in this weekend. They cite the Syrian Observatory for Human Rights monitoring events for the United Kingdom. And what they said -- the groups agreed to a non-aggression pact, in which they promised not to attack each other.

You're saying this report in The Hill by this group is false, and you know for a fact?

MCCAIN: I'm saying I know for a fact that the Free Syrian Army is being attacked by both Bashar Assad and by ISIS, and they have suffered hundreds of casualties at the hands of both. I know that they are not giving up their fight. I know that we can make them strong and resilient.  But arming and equipping 5,000 a year in the face of a 30,000-man army means that the United States of America is not serious.

HANNITY: It's -- listen, I'm not saying that these are easy questions to answer.

HANNITY: I mean, we could -- we can go back to arming the mujahideen in Afghanistan many, many years ago, with Stinger missiles, some of which have later been used and propped (ph) up (ph) and used against Americans.  It seems like a very delicate question. Do we need to examine it further, more deeply, and know the people's hands these weapons are going to get in?  Certainly, you're concerned about that.

MCCAIN: Well, I'm concerned. By the way, I know of no instance where the mujahideen injured a single American with the...

HANNITY: No, not them. The weapons ended up in the hands of...

MCCAIN: Or the weapons. I don't know where the weapons did that, either. You'll have to help me out on that. But second of all, I do know these people. I know what they're committed to. I know the fact that the president refused to help them two years ago over the recommendations of his secretary of state, secretary of defense and head of CIA was a drastic and terrible decision to make.

So yes, there are no good options. There are down sides to everything. But I guess I'd have to ask those who don't want to supply the Free Syrian Army with weapons and equipment, what is your option? What is your option, no resistance whatsoever?

HANNITY: Senator, I'll tell you what my option is, and I think the president's taken it off the table, it's got to be shock and awe. I'm very...

MCCAIN: I agree with that.

HANNITY: Senator, it breaks my heart that every piece of land that our brave men fought, bled and died for -- so much of that land has now been given back to an even worse enemy because we didn't have the insight and wisdom -- you did, and by the way, to your credit -- to follow up with intelligence and training. All that land, all the treasure, the price that we paid was so high. And to see those cities falling the way they did, and do nothing -- I -- I -- how would you feel if you were the parent of one of those soldiers that lost their lives? I wouldn't be feeling very good about it.

MCCAIN: Can I tell you it breaks my heart, too, 96 brave Americans at the first battle of Fallujah and over 600 wounded. And all of that sacrifice was wiped out because of our failure to leave a residual force behind. And if anybody tells you that we couldn't have, are not -- are lying to you.

MCCAIN: Because we could. And Lindsey and I were there. And I agree with you. It breaks my heart.

HANNITY: And it was unnecessary. And that's because we're now fighting wars and they're becoming politicized. And through this political prism, decisions are being made, and without any consideration for the sacrifice. And that's Vietnam. And that's also Iraq. And that's a shame.  And that's not fair to these men and women.

MCCAIN: I totally agree with you, my friend. And I hope to work more with you on this Free Syrian Army issue and...

HANNITY: All right. I just want to make the right decision, Senator.

MCCAIN: Thank you for what you're doing.

MCCAIN: Thank you for what you're doing.

HANNITY: All right, Senator, thank you.