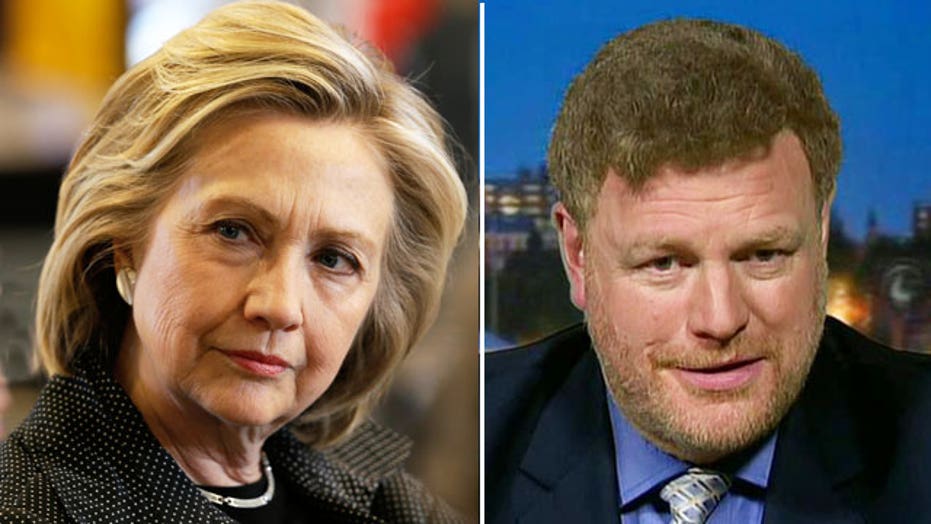 This is a rush transcript from "Hannity," May 19, 2015. This copy may not be in its final form and may be updated.

SEAN HANNITY, HOST: Welcome back to "Hannity." Another day, another scandal to report about Hillary Clinton. Now, according to the liberal New York Times, during her tenure as secretary of state, Hillary used a second private email address. And from this account, Clinton allegedly circulated multiple emails from this man, long-time Clinton political hack Sidney "vicious" Blumenthal, to senior State Department officials.

And with all these scandals now popping up around the Democratic presidential candidate, well, Ed Henry asked Mrs. Clinton during a campaign event in Iowa if she'd finally take a question from the press. Watch this.

CLINTON: Yes, maybe, when I finish talking to the people here. How's that?

CLINTON: I'll have to ponder it.

CLINTON: But I will put it on my list for due consideration.

HANNITY: A little testy. Something might have clicked there because a few minutes later, Hillary did address the new report about her correspondence with "Sid Vicious," and -- for a short time, of course. Watch this.

CLINTON: I have many, many old friends, and I always think that it's important when you get into politics to have friends you had before you were in politics and to understand what's on their minds. And he's been a friend of mine for a long time. He sent me unsolicited emails, which I passed on in some instances. And I see that that's just part of the give and take.

HANNITY: Here now with reaction is the co-author of the brand-new book, "Climate Change: The Facts," Mark Steyn is with us.

Now, just a month ago, let's see, Clinton's office issued a statement claiming that she only used one email address, Mark...

HANNITY: ... and -- when she served as secretary of state. And by the way, it wasn't the one that she corresponded with "Sid Vicious" with.

HANNITY: And her lawyer denied the same thing, too. So apparently, she used more than one email address.

STEYN: Yes, the lawyer apparently gave an incorrect term (ph) to the United States Congress on this matter. Look, you've got Jeff Foxworthy on the show tonight, Sean. Hillary is playing a brand-new game show -- "Are You Dumber Than a Bunch Of Rocks," because that's basically what the position she's taking with the American electorate. She's engaging in, essentially, a sort of a simulacrum, a miming of an election campaign.

She turned down Ed Henry because she supposedly wants to take the people's questions. They're, in fact, carefully vetted stooges. She has her colleague from the Clinton Foundation, George "Stuff His Pants With Cash," conduct an utterly fraudulent interview with the author of the book about it.

She's engaging in the equivalent of Beyonce miming -- miming -- lip-syncing to the national anthem at Obama's inaugural a couple of years ago.  And at some point, at some point, the press and the American people have to get serious about treating her the way they do any other candidate because otherwise...

STEYN: ... this is like Eva Peron in a banana republic! It's pathetic.

HANNITY: But she doesn't allow them access, Mark. And that is how she's able to navigate through these waters. At some point, I would imagine, she's going to have to answer it. But she so far is -- the strategy they've adopted is, don't talk to the press, don't talk to anybody, we'll march in those people that are in our camp and say that they're regular people. And so far, she's gotten away with it. Why would they change?

STEYN: Yes, and it's working for her. And when she does sit down and do the big interview, it will be with some favorable...

STEYN: And he'll -- he'll ask her -- he'll ask her tough questions like, Oh, do you think Republican men have a problem dealing with you as a strong woman? You know, this is a joke, and it is unbecoming!

I'm happy to see -- I would love Elizabeth Warren to run, not because I -- she's a socialist lunatic to my taste -- but she comes by her socialism honestly, just as they've had female prime ministers across the world now from Canada to New Zealand, and they've come by their socialism honestly.

And it's -- and what is at issue here is the corruption and entitlement. And at some point, we have a ridiculous situation where the Clinton Foundation has no other purpose. If you give a million dollars to the Clinton Foundation because you're worried, like Chelsea Clinton says, about diarrhea in Africa, $60,000 of it goes to diarrhea in Africa...

STEYN: ... like you were in Chicago when were at some event a year or two back, Sean. She's not a sparkling performer like you. It's like putting a (INAUDIBLE) wave machine on stage! Nobody is paying for the quality of her speeches! They're buying access and they're buying influence!

HANNITY: Let's go the tense exchange over releasing the emails, and this is what she said today.

CLINTON: I have said repeatedly I want those emails out. Nobody has a bigger interest in getting them released than I do. I respect the State Department. They have their process that they do for everybody, not just for me. But anything that they may do to expedite that process, I heartily support.

You know, I want the American people to learn as much as we can about the work that I did with our diplomats and our development experts.

I have said publicly -- I'm repeating it here in front of all of you today -- I want them out as soon as they can get out...

CLINTON: Well, they're not mine. They belong to the State Department.

HANNITY: ... she purposely erased them, the ones she wanted to.

HANNITY: That's why she wiped her server clean! We learned today from documents from the Department of Defense and State Department that she knew the day after exactly who was responsible for Benghazi! It was not spontaneous! It was planned 10 days in advance!

HANNITY: And it had nothing to do with a YouTube video! This is a lie! But she's getting away with, so it seems.

STEYN: Yes. And she's -- and we talked about this, actually, a couple of months ago, Sean, this exact issue. And I said to you, It's like you telling the IRS, no, sorry, I don't keep any financial records, but you can ask Fox News and you can ask my radio guys and you can ask these other fellows if they sent me any checks in the last year. And that's what they have to do here because she doesn't have any email records!

STEYN: They have to piece them together from all the other people!

HANNITY: ... because Hugh Hewitt asked former CIA director (sic) Mike Morell whether or not he thinks that her system was hacked. Maybe we'll be able to get it from Vladimir Putin or the Chinese. Here's how that exchange went.

HUGH HEWITT, RADIO TALK SHOW HOST: As a professional matter, do you believe that at least one or perhaps many foreign intelligence servers have -- services have everything that went to and from that server?

MIKE MORELL, FMR. DEPUTY CIA DIRECTOR: So I think that foreign intelligence services, the good ones, have everything on any unclassified network that the government uses, whether it's a private server or a public one.

HANNITY: ... she is potentially subject to blackmail because the erased emails they have in their position that might, in fact, be damning to her and cause a lot of legal problems for her?

STEYN: No, I would absolutely bet, Sean, that the Russians have them, the Chinese have them. If we're lucky, a couple of reasonably friendly intelligence services might have them, as well, like the French and The British.

But it might even be that ISIS, who actually are quite sophisticated when it comes to the Internet, have them. But I think there's absolutely no doubt that if you wanted to get them from the Chinese, the Chinese could cough up a full set of Hillary Clinton emails...

STEYN: ... well before the State -- the State Department's releasing them a day before the New Hampshire primary or something. They're insulting the people's representatives in Congress, Sean!