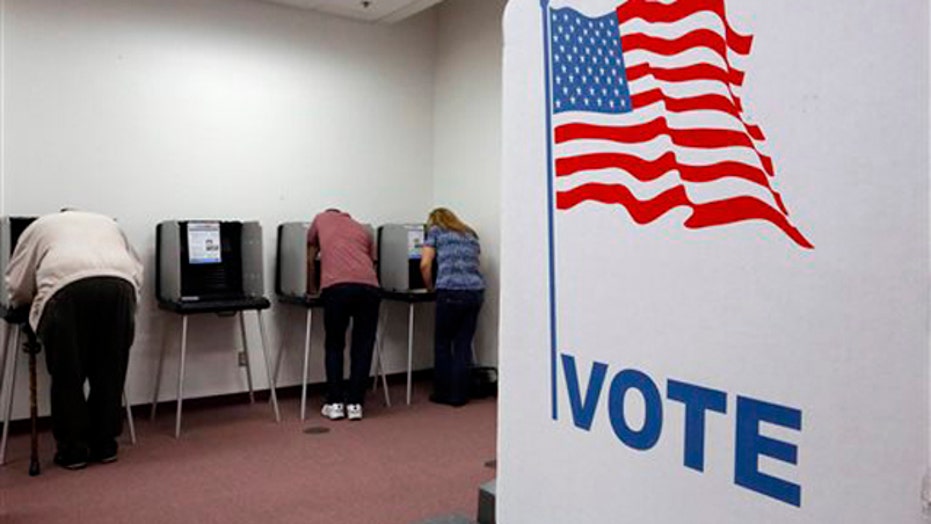 This is a rush transcript from "Hannity," October 21, 2014. This copy may not be in its final form and may be updated.

SEAN HANNITY, HOST: While Democratic candidates in those battleground states have gone to great lengths to distance themselves from a very unpopular president, well, the commander-in-chief, well, he must have missed the memo because he's not helping them make their case. Listen to this.

So yes, this isn't about my feelings being hurt. These are folks who are strong allies and supporters of me. And you know, I tell them, I said, "You know what? You do what you need to win."

HANNITY: All right, here with reaction to that and much more is nationally syndicated radio talk show host -- I call him "The Great One" -- Mark Levin.

Mark, that statement -- did you know Al Sharpton had a radio show? Apparently, he does -- comes on the heels of the president getting in trouble for saying, "I'm not on the ballot, Michelle's pretty happy, but make no mistakes, these policies are on the ballot, every single one of them." A lot of Democrats are furious. What do you think's going on here?

MARK LEVIN, RADIO TALK SHOW HOST: Well, first of all, I didn't know Al Sharpton could speak in complete sentences, and I'm still not certain that he can.

As for Obama, it seems like the Democrats are running away from him.  The Republicans can't get close enough to him. And the reason is it's not just Obama. This is quintessential statism. It's a disaster. It's an impossibility. Every one of these incumbent Democrats who are now pretending they don't support Obama supported him over 90, 95 percent.  They supported ObamaCare, they supported amnesty, they supported this massive deficit spending and this debt. And all this is coming home now, and it is a disaster. The country's gone to hell under this president, under the Democrat party. Everybody knows it.

My problem here is the Republicans are running a very quiet campaign. They're not standing up for any principles, very little substance. This is an enormous opportunity to expand the Republican Party, to build it, to create momentum for 2016, and they're not doing it.

So, while the Republicans I believe are going to have a very good night in two weeks, they could have had a better one.

LEVIN: I think with Obama, it's going to get worse. You're going to see his full Mussolini coming out with his pen and his phone, these executive fiats that are utterly unconstitutional. He's going to do everything he can in the last two years of his presidency to further screw up the country, whether it's the border and amnesty, whether it's the economy, whether it's God knows what. He's been a very divisive, very damaging, very counterproductive president, and so has his party.

And that's why you need to throw Harry Reid out of the United States Senate and take over the Senate. I don't want Republicans to think they're going to be joyful with what Mitch McConnell and the Republicans do. I mean, the first thing they're going to say is, you know, "We need the presidency." But keep it in mind. But we get rid of Harry Reid, and then we nominate a conservative for president of the United States.

HANNITY: We got two issues that have come up. I often point out that during every election, I see the Democrats play the race card. I've gone through the history of this, both on this show and on my radio show. You got in North Carolina, a flyer, pro-Kay Hagan, using a lynching image, warning of Obama's impeachment if a Democrat loses. You got -- in Georgia, you've got a whole bunch of images being sent out. "If you want to prevent another Ferguson in their future" -- you've got two young African-American kids -- "Don't shoot," and their fingerprints on it. They're using that in Georgia.

What are we to make of that tactic? How should they respond?

LEVIN: What we're to make of it is, this is a hateful, race-baiting party that has really no good ideas, let alone new ideas. And I hope African-Americans around the country understand that the Democrat party has always used them. The Democrat party stood for slavery against Lincoln. It stood for segregation in the -- all the way up from the Civil War into the 1950s and '60s.

You can look at FDR's first nominee to the Supreme Court, Hugo Black, was a former lawyer for the Klan in Alabama. You can look at Robert Byrd.  That wasn't that long ago when the Democrats rallied behind him and made him majority leader in the Senate, former Klansman.

HANNITY: Let me ask you -- if the Democrats that are running, especially in these red states -- I'm going to put up on the screen the percentage of the time these Democratic candidates voted with the president. You know, there you have Mark Pryor -- 90 percent, Udall 99, Kay Hagan 96, Begich 97, Landrieu 97, Jeanne Shaheen 99!

Now you've got one candidate -- three candidates total now -- who won't even admit they voted for Obama. And now Jeanne Shaheen and Kay Hagan have changed their position on a travel ban. Are these election year conversions? Would we expect any different voting pattern if they did get reelected?

LEVIN: No, these are deceitful hack politicians. And the American people have to decide if they like the direction the country's going in.  Do you want chaos on the border? Do you want immigration amnesty? Do you want massive debt? Do you want more redistribution of wealth? Do you want more nationalization of health care, destruction of jobs, outsourcing of jobs? If you like it, then vote for your Democrat.

The Democrat Party is a disaster! It's become a radical party! I have problems with the Republican Party, but the Democrat party really has lost its way, and they need to get a good swift kick in the ass in this election!

HANNITY: All right, well said. Tell us how you really feel. "The Great One," Mark Levin, good to see you.