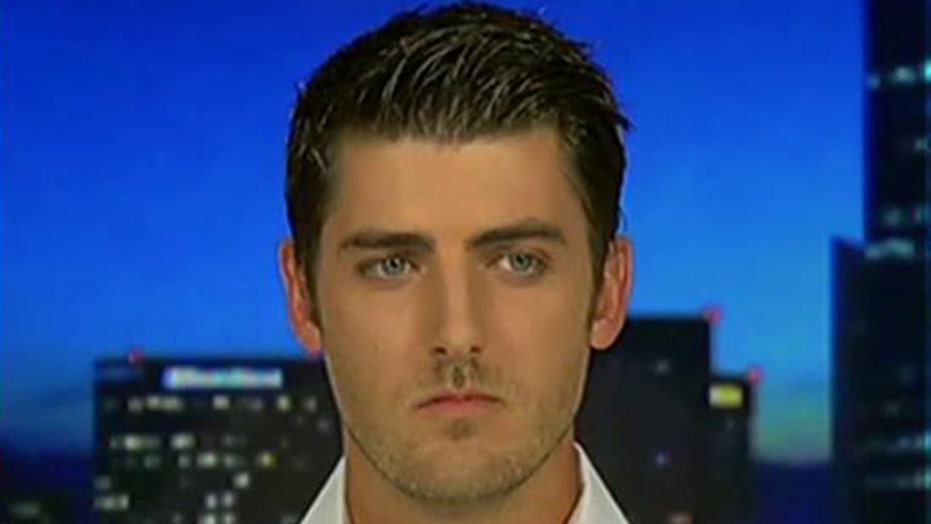 This is a rush transcript from "The Kelly File," August 25, 2014. This copy may not be in its final form and may be updated.

MEGYN KELLY, HOST: Even before the horror of the Foley murder, one Marine Corps vet was sending this message to this group by posting an open letter in the world of social media that ISIS loves to use so much. He wrote impart, quote, "Do you really think you stand a chance on U.S. soil? Do you really think it would be smart to poke that bear? You attack us and there is no mercy."

Nick Powers is a Marine Corps veteran who served in Iraq in 2006 and he wrote that letter. Nick, good to see you tonight. And this thing has gone completely viral what you wrote back to ISIS. My own feeling is many of us feel somewhat disempowered when we see this kind of barbarism and we don't understand how we can possibly combat it. You look at them and as you wrote to them in your letter, quote, "As I sit here watching you execute women, children and men in the Middle East, I chuckle." And you explained why you had that reaction. Explain.

NICK POWERS, MARINE CORPS VETERAN: Well, it's to go along with what he said. A lot of people feel disempowered. I noticed that ISIS was using social media to get their word out and to put that fear in people's hearts so they can try and control it. And the whole thing with terrorism is they control with fear.

The reason why I chuckle is because they're bullying the weak. They're in locations where people aren't trained to fight back. And here in the United States in 2012, we had 21.2 million veterans who have been trained to fight and are willing to stand up to that threat.

KELLY: And so you're speaking to, you know, the notion that they might come here. And by the way, I want viewers to know despite the fact the administration is now walking back that there's an immediate threat to the United States, the former deputy director of the CIA Mike Morell has been out there repeatedly including just yesterday saying, they do want to hit America, that's their goal. Establish the caliphate and then come here. But you're providing some perspective on whether they could do that. And you say, as I just said, you know, if you came here, do you really think you would stand a chance on U.S. soil? When people think about that though and they look to 9/11, how do you debunk those fears?

POWERS: Well, from what they're saying is that they're going to raise their flag over the White House. And that's comical to me. You're talking about 21.2 million veterans who have had their hands tied with the rules of engagement that we've had to play by when they don't play by the rules. And the ROEs have derisory limited the mission capability that our military's has had --

POWERS: Yes. Exactly. The rules of engagement are causing our men and women to get shot at and they have to look for a response before they can shoot back. And when you're going up against a group like ISIS who is obviously not afraid to shoot first and they play those rules and they set the roads side bombs and do all the things that we've been fighting against for 13 years, you know, it's really hard to accomplish anything when you're bound by those rules of engagement.

KELLY: I know you say when you watch, you know, things like what happened to Jim Foley, ISIS' gains in Iraq in particular, you feel mad, you feel angry. Explain.

POWERS: Furious. It's disgusting to me that there are people on this planet who think that executing people by cutting their heads off is a way of spreading their message. You know, it's really disturbing to me that these extremist groups would even try and publicize something like that. But it goes along the whole thing with terrorism's mission is to create fear and chaos. And that's how they control.

KELLY: And so if you want to leave the viewers with one thought tonight on this group, what is it?

POWERS: The one thought would be is that, you know, the United States as one can't fight this global problem. You know, the entire world needs to come together and both republicans and democrats need to stop arguing and make a plan to get with our NATO allies, to start assaulting the problems where they're beginning.

KELLY: Nick, thank you for your service. Thanks for being here.