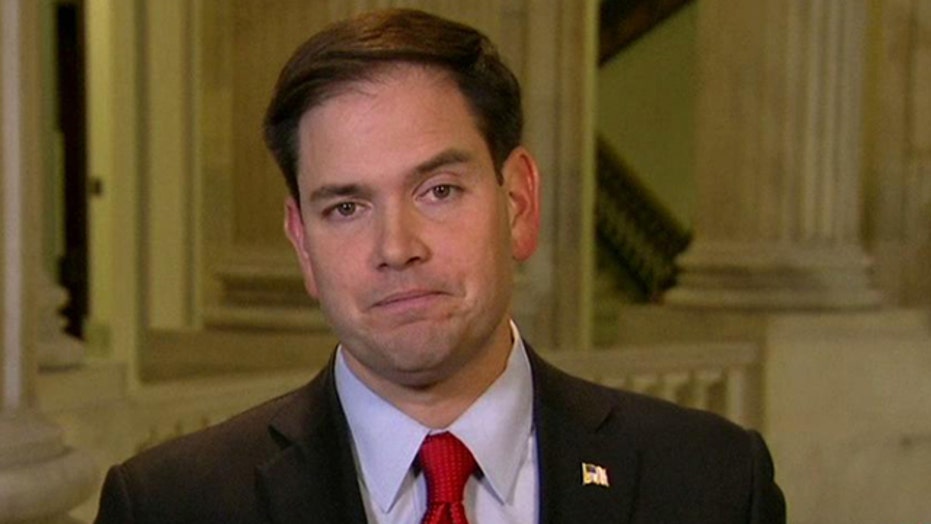 Marco Rubio on Benghazi: 'There was no plan in place'

This is a rush transcript from "Hannity," January 15, 2014. This copy may not be in its final form and may be updated.

SEAN HANNITY, HOST: Joining me now with reaction to all this, Florida Senator Marco Rubio. He's on the Intelligence Committee. Sir, how are you?

HANNITY: All right, I can't conclude anything else is that everybody on down -- they knew the truth, they knew it from the get-go and they purposely lied. Can you -- do you make any other conclusion than that?

RUBIO: No, here's what I would conclude, three things I'd add. Number one, you've just illustrated one of them, and that is there was this narrative from the Obama administration that the war against Al Qaeda is over. Al Qaeda is in retreat and incapable of carrying out an attack like this.

Well, not only did they do this in Libya, but we see Al Qaeda reforming elements in North Africa. We see it in Syria, now in Iraq. It shows a blind spot that this administration has, and in this case, perhaps, you know, withholding information from the American public when they knew better.

But here's the other two points that are not getting nearly enough attention. Number one, there was a steady stream of reporting that this facility in Benghazi was in grave danger, that this was a very dangerous place. There had been attacks against the facility before. The U.K. had already pulled out. The Red Cross had pulled out. And they didn't have enough security to face -- they maybe shouldn't even have been there at this stage in this process. Who's responsible for that? The buck stops with Hillary Clinton.

Here's the other thing that I would say with regards to it. There was no plan in place. There was not enough military assets ready to deploy to rescue people if they got into trouble. So you have this dangerous place. They knew it was dangerous. They didn't provide security and they didn't have a plan to extract people, and people need to be held accountable for that failure.

HANNITY: All right, so this could have -- this all could have been prevented had they listened to Ambassador Stevens and others. Is that -- is that a fair conclusion?

RUBIO: Well, it could have been prevented if they would have listened to him and either provided more security or potentially closed down this facility in Benghazi.

HANNITY: And what about what we learned -- FOX News's James Rosen commented on this yesterday, where as it relates to Benghazi, that the president's military people the day of the attack, while the attack was going on, were informed that this was a terrorist attack. That's what they were told and that's what they believed as they were going to see the president.

So isn't it logical that we conclude the president knew while the attack was going on it was a terror attack?

RUBIO: I think what's clear is that even after they knew that this was linked to terrorist elements and people linked to terrorists, they still continued to say that it was an attack created by videos, as opposed -- and from the very beginning, that never made any sense. You don't bring shoulder-fired rockets, you don't bring the kind of armaments they had to a spontaneous protest.

RUBIO: It didn't make sense from the very beginning.

HANNITY: You don't have shoulder-fired missiles when you go into a protest. Good point.

RUBIO: But here's the bottom line, is they knew -- they knew that this was a dangerous place. They had a steady stream of intelligence reporting that was telling them this facility in Benghazi is in a very dangerous place. From that, they should have done one of two things, either closed it down, like the Brits had done, or provide more security. They didn't do that. And they didn't have a plan in place to rescue these people.

RUBIO: They didn't have military assets to rescue these people.

RUBIO: Someone needs to be held accountable for that.

HANNITY: They could have prevented it before. They could have helped during, and then they -- the big lie and the cover-up afterwards, and that is that Susan Rice lied, Hillary Clinton lied, Barack Obama lied. Do you have any doubt in your mind that when they were blaming this guy for this YouTube video, which had nothing to do with it, when they were saying that there was a protest, they knew within days it didn't happen. Do you have any doubt they consciously lied to the American people? Because I have no doubt.

RUBIO: Yes, their narrative is pretty clear. They want the story to be -- remember, this was in the middle of the presidential campaign. And the narrative the president was putting out was bin Laden is dead and Al Qaeda is on the run. And if that's your argument, you can't possibly turn around and say, Oh, but by the way, al Qaeda just carried out an attack and killed four Americans. So they clearly had a political motive for that narrative not to be the case.

HANNITY: All right, so to win an election, they want to avoid any blame or controversy before this election. They purposely lie and go out there because they screwed up before, during and after. Now the question is -- now that we know that this is true -- and by the way, this report wouldn't have come out without Democratic support. That's interesting to me.

HANNITY: Now, what recourse do you guys have when the president of the United States and the White House is lying so systematically to the American people? What do we do?

RUBIO: Well, here's the one thing we really need to be focused on. We haven't spent any time on this whatsoever. And that is State Department accountability. They are responsible for the safety and the well-being of our diplomats abroad. The committee here that has jurisdiction on the State Department, which I serve on, is the Foreign Relations Committee.

Beyond that one hearing they had last year, where Secretary Clinton played -- said those things you just played the clip on about, "What difference does it make?" -- it has done absolutely nothing on this issue. The time has come for the Senate Foreign Relations Committee to hold hearings and conduct its own investigation as to why it is that the State Department, knowing what it knew about Benghazi, did not provide sufficient security to keep those people alive and prevent this tragedy from happening.

RUBIO: That's -- well, again, and that's why I hope we'll have Foreign Relation hearings. We will call them as witness so they can testify...

RUBIO: ... before the American public about what truly happened on that terrible day.

HANNITY: Massive cover-up. By the way, if you like your plan, you -- oh, you can't keep your plan, either.

HANNITY: A lot of lies being told to the American people today, Senator. Good to see you. Thank you.