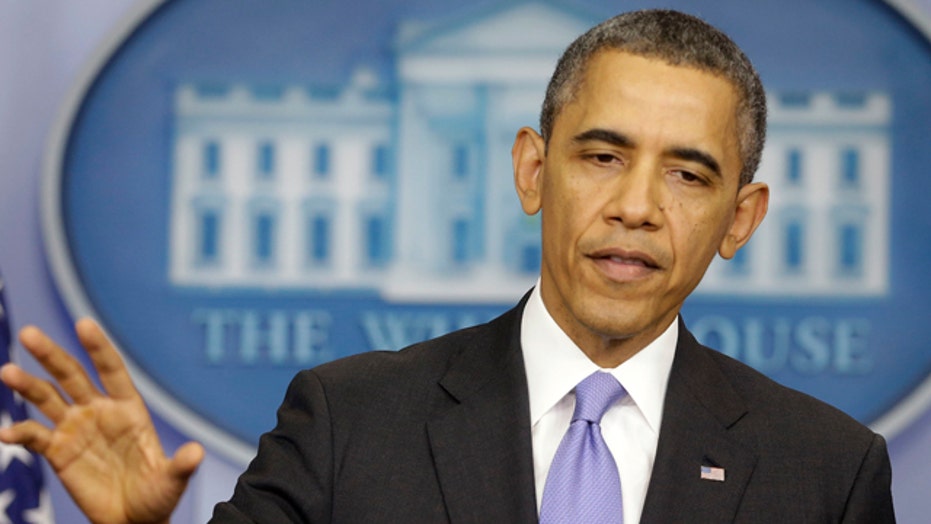 Why the questioning may be good news for taxpayers

MICHELLE FIELDS: I think it's really good for taxpayers, because now all of these big-government plans that democrats and the Obama administration want to push through are not really going to be able to go through. Democrats are running away from ObamaCare because they know that it's a huge liability, and we have the midterm elections coming up. Democrats are not going to get any seats. Republicans are going to get seats because the democrats are so vulnerable with this ObamaCare fiasco.

JONATHAN HOENIG: I don't think there's actually really been any change. I don't think the press has broken up with Obama. I don't think there's been so much scrutiny. Yes there's been scrutiny on this issue or that issue, press coverage or one particular lie, but there's really been no disagreement from the press or the public on Obama's basic, fundamental principles: his self-sacrifice, his deference to authority, and his total distrust of individualism, and you see this because not only in the media but on the right actually echo Obama's statements. Mike Lee talking about "we're all in this together." So until there's actually a real alternative to Obama's collectivism, I don't see the media or anyone else really standing in the way.

RICHARD FOWLER: I don't the media was ever on the President's side to begin with. I think there were times they supported him, times they didn't support him, but right now the fact that a lot of the mainstream media is saying "we disagree with the President" I think is great for him going into 2014. It gives him a chance to do a restart, a reset, push for immigration reform, push for raising the minimum wage. All things that Americans want to get done.

WAYNE ROGERS: I happen to agree with Jonathan. Jonathan is absolutely right. The terrible part about this-the fundamental part is that this is not a law. They've said "oh it's a law. The house has passed it. It was blessed by the Supreme Court." They're making it up as they go along. This is outrageous! This is fascist government at its worse. We have a totalitarian president who just every now and then makes up something differently. Today he made up another part of this law. This is not law at all; this is a government by fiat.

JONATHAN HOENIG: Well this is the free market at work. Phil has every right to say what he said. A&E has every right to fire him, and sponsors have a right to either associate or not associate with him. There's no censorship her, as unfortunately I heard I believe Governor Palin and Senator Cruz talk about. Censorship only comes from government, not from private interactions. I happen to think that's Phil's speech will end up hurting him. People will likely disassociate themselves with these types of remarks. To me it feels a little bit like Jimmy the Greek part II.

WAYNE ROGERS: At the risk of supporting my friend Jonathan, I think he's absolutely right. He has the right to make these remarks and say anything he wants to. By the same token, the sponsor and the network has every right to fire him if they want to. Martin Bashir on MSNBC, the got rid of him. They got rid of the actor (Alec Baldwin) the same thing. If they don't like what you say they have every right to say "hey, good bye." You have every right, if you want, to say that. I believe this is a personal thing. If you have a personal interest in your morals, your politics, your religion-those are personal to you. If you want to express them you've got to take the risk somebody else is going to disagree.

RICHARD FOWLER: I have to agree with Wayne on this one. When you talk about capitalism and the market, you talk about the brand, and A&E's brand is a very wholesome, family-friendly brand and comments like that don't really air as family-friendly. So therefore, even if networks decide to stay with Duck Dynasty you have to understand Phil is no longer there; he's suspended indefinitely for the horrible comments that he made.

MICHELLE FIELDS: They have all of these episodes that are planned for the next week, so they don't mind profiting off of it. The thing is A&E is a private company, so they can decide what they want to do, but the free market responds, and the free market is responding right now. Like you mentioned, the Facebook page has over a million likes and people saying to boycott A&E. so people are not happy with this. So I think A&E is actually going to have to change course.

WAYNE ROGERS: Private charity does a much better job than anybody else. The federal government can't begin to approach it. Private people go around giving away things. It's a great act at that time of the year when people are willing to do that. It's a wonderful thing.

MICHELLE FIELDS: I think it's amazing, even if you have a lot of resources or just a little to try to spread that holiday cheer. You know it's rumored that the anonymous person who's doing this is actually the former VP of Paypal, and it's just a rumor, but I don't know if you've used Paypal before-it's a terrible website so I don't know if he's spreading holiday cheer or he's asking God for forgiveness for making us use that terrible website, bur either way it's a good deed.

RICHARD FOWLER: I think this is great. I love Christmas miracles. The other one that comes to mind when I think about this one is West Jet in Canada which basically bought everyone on the plane like their best Christmas gift, which was amazing. So I love this kind of stuff. I think it's great for the holidays. Hopefully even though these folks are very generous they'll pay their fair share in taxes.

JONATHAN HOENIG: I hope that whoever is giving these large sums of money, these tips, is doing it for him or herself, however, not for Jesus. I mean charity should be all about you. It should be selfish, you should be doing it with the knowledge that you get something out of it, even if it's the knowledge that "boy, this person's going to be so shocked and delighted when they see $1,000 tip on that bill." So charity is all about self, promoting your own values-individuals, organizations that you want to support. Government has nothing to do with it.

WAYNE ROGERS: GET HEALTHY RETURNS IN 2014 WITH BIOTECH AND (ENZY)

JONATHAN HOENIG: "PERK UP" AND PROFIT FROM COFFEE & (CAFE)