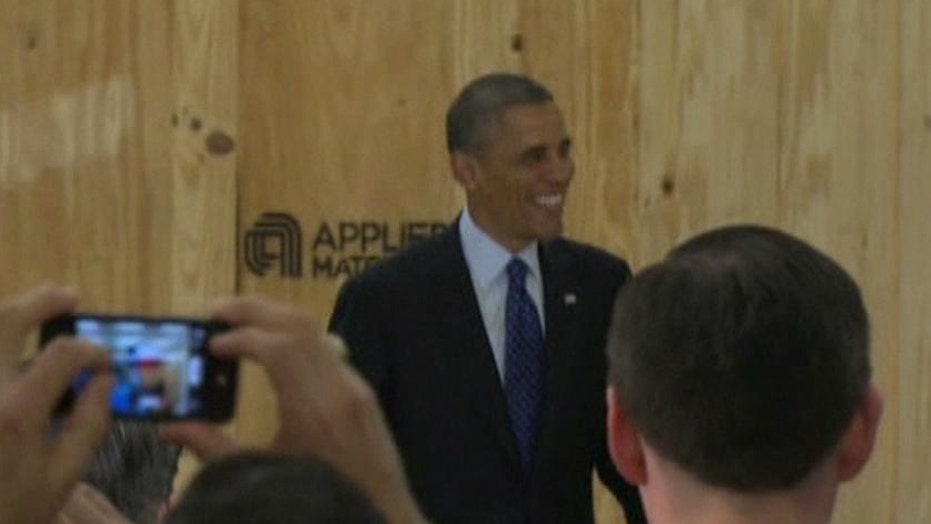 President Obama promoting his jobs plan in Texas this week; Texas is a state with low taxes and few regulations, so should the Pres learn how to create jobs from Texas?

DAGEN MCDOWELL: Giddy-up! More like Texas. The White House is taking the nation as a whole down a road towards Europe with more regulation, significantly higher taxes and bigger entitlement programs. Instead we should be looking to Texas as a model: no personal income taxes, wouldn't we all love that; a very low tax burden among the states, the sixth lowest tax burden in the nation; very friendly regulatory environment, one of the smallest governments based on the number of residents; and they are actively luring businesses into the state from other burdensome states.

CHARLES PAYNE: Texas is pro-business. In addition to what Dagen talked about, what about the idea of people come to Texas, relocate their family to a place that says 'bring your dreams --the American Dream'. The only American dream: self-reliance, pull yourself up by your bootstraps, the president claims that never happened in this country. So, yes, the question you asked in the beginning, there is a lot of irony involved here absolutely.

BEN STEIN: Well, its an interesting situation. Texas is booming, but let's remember Texas has a lot of oil, a lot of natural gas, Texas has a tremendous number of very hard working Hispanic immigrants. It does have low taxes, but it also has less of a safety welfare net than many other states. But I think the main thing going on here is political, a lot of people have written that if Texas were to switch democrat there would be no more republican presidents for the foreseeable future. I think Mr. Obama is trying to build that up as a credible threat.

ADAM LASHINSKY: I think that is an astute political point by Ben. Neil that is a given! If we're going to say should the United States be emulating Texas, let's be real here, Texas does not have a defense department or an army, though I'm sure they'd like to have one. They don't have to defend us in wars, they don't have to run a food and drug administration. The president has been working hard on deregulation, I would not say he's been working hard on cutting taxes, I wouldn't fight that battle. He's been trying to streamline the regulatory system. When can debate whether or not he's been successful. Its interesting we're having this discussion during the week when we have had new data that the economy is doing very well, and that the budget deficit problem is getting less severe because of higher tax revenue to the federal government. I mean the president, I'm not going to say that he is taking a victory lap, but you're right Neil that it is a good time to go to Texas and say 'hey we're doing pretty well.'

Immigration bill getting filled with 'favors' to win votes. But if it needs 'favors' to pass, shouldn't that be a reason to press the pause button?

CHARLES PAYNE: As it gets larger, the red flags need to come out. I was shocked when I read it was over 800 pages. This is a reform that both parties agreed needs to be done and the more Christmas ornaments, the more they talk about government controlling private industry and salaries, the more they claim it's going to bring down costs and other areas like social security, well, you know what? That doesn't happen with the health care bill. Every time we see this, the rhetoric should be the scarier we should be.

DAGEN MCDOWELL: I don't have a problem with them adding because what you're talking about the meat cutters and Irish immigrants, these are requests put in by various senators-- republican and democrat. Sen. Chuck Schumer got more visas for Irish immigrants, Sen. Lindsey Graham for meat cutters.

ADAM LASHINKSY: I agree with Dagen. This is the messy way that we legislate. None of us on this program are legislators. So it looks obnoxious to us. And it is. But the important thing is that we get this immigration bill done because it's good bipartisan policy that our country needs. And we shouldn't expect this to be any different than the nonsense that goes on in Washington all the time. If this is -- I would love for us to do that. But if this is what it takes to, I don't know, buy the votes of some members of congress who shamefully ought to be supporting legislation in the first place and aren't, so be it.

BEN STEIN: I think it's politics as usual. But politics as usual is a -- it's like making sausages, it's not something you want to see up close and personal. I probably eat a lot more sausage than you do. It's very -- with all due respect, why not let in these people we need? Why not let in more ski instructors? But I don't understand what the problem is, let in more meat cutters. Almost all of us like meat. We all love the Irish. Who doesn't?

Public colleges seeing enrollment drop after tuition skyrockets; and it's happening as a new study shows the fastest growing jobs do not require a college degree

BEN STEIN: A lot of kids in college are getting high and partying and not learning anything and if your parents are paying a fortune for you to get high and partying not learning anything, you should be at work in the salt mines. But if kids actually go to college and work, then tuition turns out to be a bargain. It's entirely dependent on how much effort the student puts into it. But on the other hand, college expenses and salaries to professors who work a very few hours a week are insane.

DAGEN MCDOWELL: This is the most important decision that any young person has to make, the cost benefit analysis of should I go? Should I go into debt to get a degree that won't get me a job that will enable me to pay back those loans in my lifetime? Go to an in-state school. Go to a cheaper college, particularly if you're going to party. What's dumber than taking money your parents is borrowing and the being drunk for four years.

CHARLES PAYNE: Well, a lot of people don't have a choice anymore. But it's interesting that colleges have gotten a free pass. For some reason, they're one of these favorite classes over the years. The rate of tuition is hundreds of percents higher than inflation. I kind of disagree with what Adam and other people who suggest, well, particularly people who have college degrees suggest everyone shouldn't go to college. People who own a home, the popular thing is to say everyone shouldn't own a home. But to Dagen's point, if you go out and take the loan, it's your loan. Maybe you thought president Obama said he was going to forgive it. It's your loan. The taxpayers aren't going to be on the hook for it.

ADAM LASHINSKY: Well, slightly different take on that, but I don't disagree with what Ben said. I think this is a very healthy market corrective going on. Everything you said in the lead in is accurate, Neil. The costs have gotten out of whack and the product being delivered has not kept with the cost. And so some segment of the population has said, we don't need to go to college. You know what? They're right. Not everyone needs to go to college.