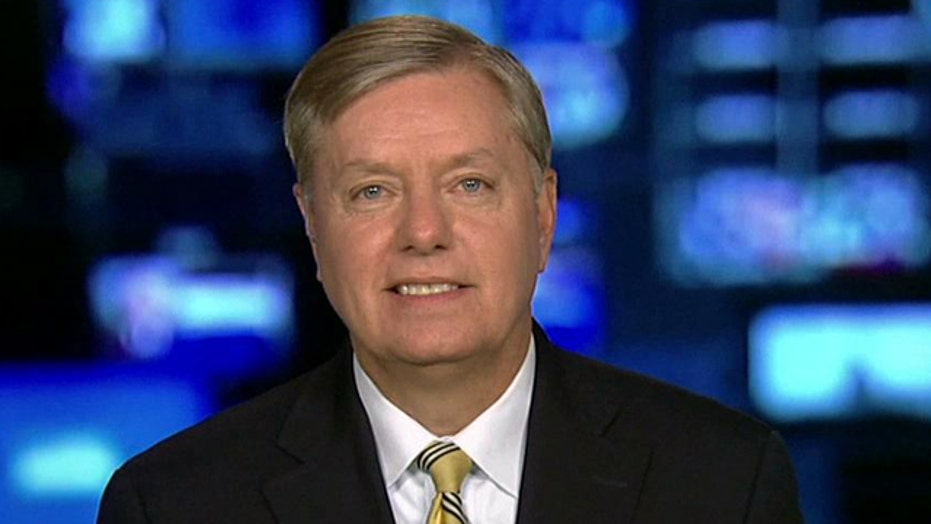 Senator on how the health care law will impact 2014 elections

This is a rush transcript from "Hannity," December 9, 2013. This copy may not be in its final form and may be updated.

SEAN HANNITY, HOST: Here with reaction to this and much more, South Carolina Senator Lindsey Graham. Senator, welcome back to the program.

HANNITY: The bill would never have passed! What I don't get is, don't they see these poll numbers, the president on every issue now in the 30s -- honesty, trustworthiness. Young people want to throw him out of office over this, but yet they keep digging deeper! Why?

If they had said at the beginning, you can keep your doctor, but you're going to have to pay a lot more for -- lot more for -- for the coverage, keeping your same doctor, the bill would never have passed. They're just digging a hole deeper.

But here's what's going to happen. Democrats up in 2014 are going to break from the White House over this issue.

HANNITY: Where is Mark Begich? Where is Mary Landrieu? Where are these people? So far, they've been holding the line.

GRAHAM: Elections have a really interesting effect on Washington. I really do believe that the idea -- the worst is yet to come. Employer- sponsored plans were given a year reprieve. Well, next January, the employer mandate is fully -- is fully implementable. So in September or October of next year, if you get your coverage through your employer, you're going to get a sticker shock premium increase. And that's going to -- the other shoe hasn't fallen yet. And I think that's what breaks Democrats is when people get notice from their employers about the increase their (ph) coverage or the fact that the employer dropped their coverage.

HANNITY: All right, you, Senator Ayotte, Senator Barrasso introduced a bill that says anybody can opt out of ObamaCare? Am I understanding that correctly?

GRAHAM: No. Remember, he's given waivers to all of his buddies, Obama has. Unions and everybody that he really likes doesn't have to deal with this law. As a matter of fact, the whole executive branch is exempt from ObamaCare.

What I said, along with Barrasso and Ayotte, is that states should be able to determine whether they want to stay in or out. So if you want to stay in in New York and California, great. Give the people in South Carolina a chance to opt out. Give us the waiver opportunity you've given all your political buddies.

HANNITY: I don't understand -- when Ted Cruz was doing his filibuster and -- and you're going to say, why don't I direct this to John McCain? John McCain doesn't like me anymore...

HANNITY: ... and doesn't come on the program -- well, wait a minute. But I mean, he -- he lashed out and said it was delusional for anybody to think that this could be stopped. I don't understand why, knowing how bad this is, that every Republican in the House and the Senate didn't stand strong and say, "We need a repeal because this is all going to happen." There wasn't unity there! There was in-fighting. Why?

GRAHAM: Well, because shutting the government down to get a repeal I thought was a tactical choice that obscured the badness of the law and focused on the government being shut down. What you're seeing play out now is it's all about ObamaCare. It's just not the website. It's about people in the individual market being -- having their health insurance basically taken away.

The employer side is the next shoe is to drop. The more you talk and focus about ObamaCare, the more it's about their policy and less about us, the better off we do and the better off the country will be.

HANNITY: But in the -- I -- well, in the meantime, the cancellation letters keep going out day after day, week after week...

GRAHAM: Well, here's -- where's what I've decided to do. As a senator, I can go into the D.C. exchange with about a 60 percent subsidy. Most people in South Carolina will not get that deal. I'm going to sign up in the South Carolina exchange. My premiums are going to go up by almost $5,000, and the coverage I get is a fraction of what I used to have.

This movie is coming to visit you soon. The goal of this bill is to destroy private sector health care and put everybody into government-run health care.

Harry Reid said it best. This is the first step toward single-payer health care coverage. This is not about covering the uninsured, Sean. It is about destroying the ability of the private sector to offer health care, and we all have to buy it through the government and get what the government gives us on the terms they want.

That's what this is about. Obama's dream has been a single-payer health care system.

HANNITY: All right, but yet...

GRAHAM: He's doing through ObamaCare what he couldn't do directly.

HANNITY: What the president keeps saying is, "As long as I'm president, this isn't going to change." It's...

HANNITY: Well, that's what he said. You're laughing at that?

HANNITY: You think this is going away?

GRAHAM: Yes, I'm laughing at that. No, I think -- here's what I think, that the American people are going to be in open rebellion. There were so -- if this -- the consumer protection laws that apply to the marketing of this bill, you could sue the Obama administration. Some of the spokesmen could have gone to jail.

But this is all about politics. Mark my word, write the date down. Democrats who are facing election in 2014 are not going to be able to withstand the burden of this bill. It was built on a House of lies. The fundamental precept of the bill doesn't make sense, you can't get more and pay less.

HANNITY: And when -- when are they going to break? They haven't broken yet!

GRAHAM: Just stay tuned. The more you and I talk about the flaws in this bill, the more notices that come out, the more employers who send out letters, "You're going to double your premiums if you want to stay on this plan or we have to cancel your coverage because you can't afford it," it's going to affect the political marketplace. The private sector marketplace is ahead of the political marketplace. There'll be a merging of the two here soon.

It takes people like us talking about a better alternative and the reality of the bill. What Mr. Emanuel told you was a flat-out distortion. If Americans had heard what he said, they would have never gotten 60 votes.

All right, Senator, thank you. Appreciate it.